The Elaborate Entrance of Chad Deity
5 Performances Only! 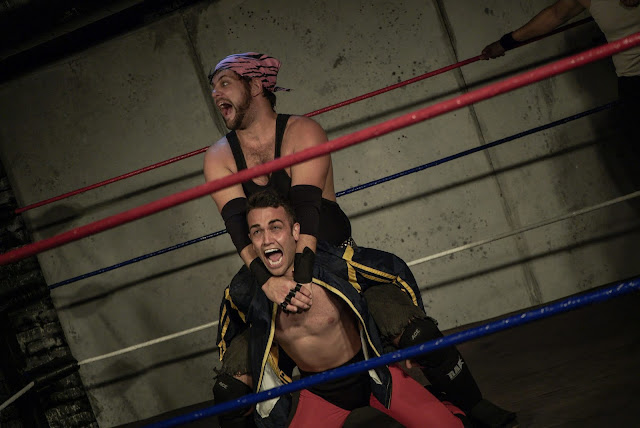 REVIEW:
Tuesday night, my son, Dugan and I made the trek from Chicago's northwest side down to 7059 S. South Shore Dr. My son was particularly excited to see the show, since he had worked on productions at Actors Gymnasium with several involved with the show, and Alejandro Tey had directed a couple AG youth circus shows both of my teens were in.

Parking was plentiful and it was easy to find the elegantly retro, south side gem, The South Shore Cultural Center. I'd been there decades ago for their jazz fest and on a wedding location scout with a friend, but I'd forgotten the opulent chandeliers and solarium. It was like walking into another world. 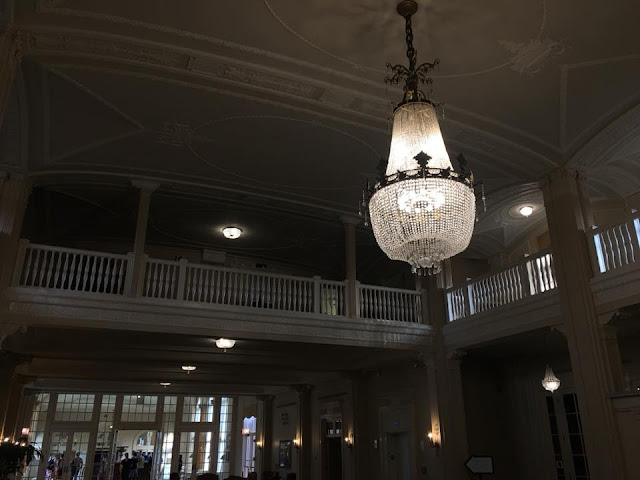 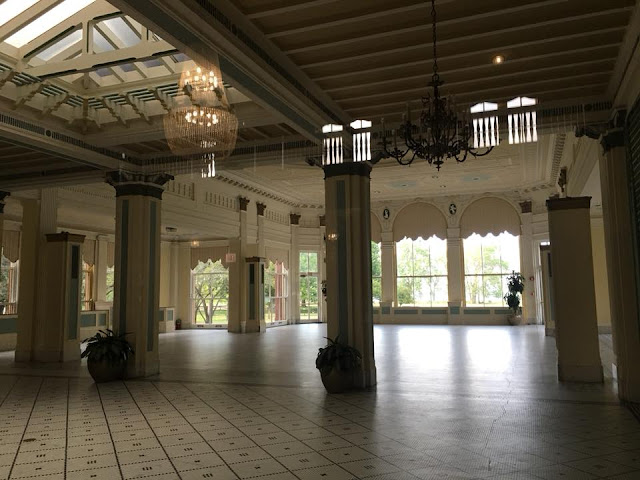 Then we entered the theatre, and it was like walking into another universe. A wrestling platform, ringed with risers full of seats, dominated an arena with loud music playing, and a palpable excitement among the fans filing in. A lone wrestler, Alejandro Tey, begins to warm up and runs through his paces, bouncing off the walls, practicing impressive acro moves, and crashing to the mat with thunderous reverberations. 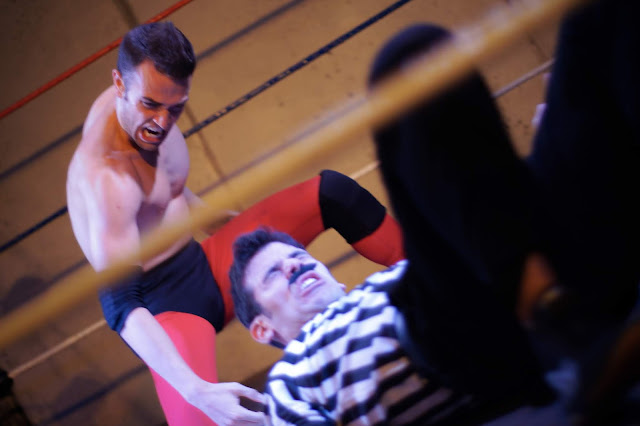 A wall full of screens comes to life with vivid wrestling promo videos and character intros, and we're off. This fast paced production is full of award winning stage combat, stunning choreography, and non stop excitement. The action is impressive and the characters colorful, but what really elevates The Elaborate Entrance of Chad Deity is the depth and insight this show brings. The production is a microcosm of the world of marketing racism, fear and stereotypes for profit and entertainment. This is a searing look at capitalism, complicity, ego, and the chasm between minority reality and scripted drivel for profit. It's easy to see how Kyle Encinas won the 2018 Jeff Award for Fight Choreography for this production. Truly impressive work!

Alejandro Tey breaks down the 4th wall with his monologues directly to the audience, in a phenomenal performance that's as thought provoking as it is physical. Kristoffer Diaz's writing is spot on and the entire cast brings his words vividly to life and slams them home. Chad Deity provides a terrifically timely and much needed springboard for conversations around how our society falsely elevates some and crushes many, without regard for actual talent or skill. When this extends to entire socioeconomic classes and/or races or religions, we have a huge problem that needs to be acknowledged and fixed. I highly recommend catching this excellent production. 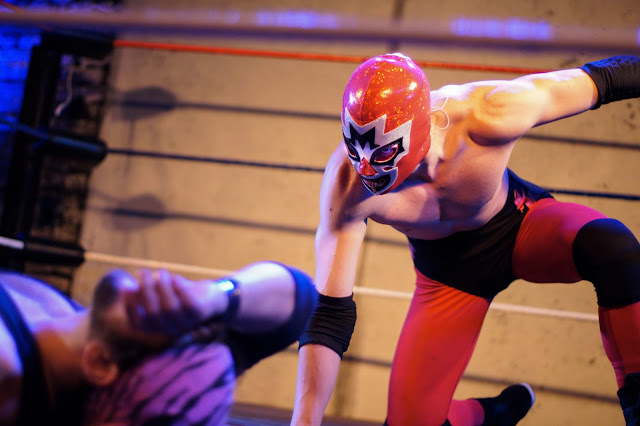 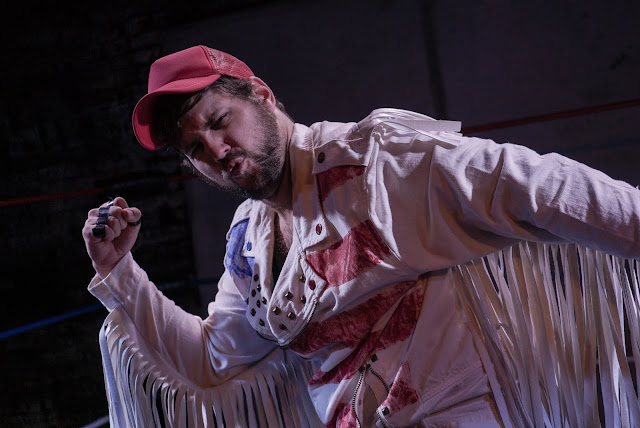 Red Theater Chicago's Jeff Award-winning production of The Elaborate Entrance of Chad Deity will receive a limited remount as part of the 2018 Theater on the Lake Summer Theater Festival. Written by Kristoffer Diaz and directed by company member Jeremy Aluma, performances will take place August 7-10, 2018 at The South Shore Cultural Center.

What people are saying about The Elaborate Entrance of Chad Deity:

* “Aluma’s direction sizzles and his cast of actor/wrestlers are all outstanding.” – Third Coast Review


Kyle Encinas won the 2018 Jeff Award for Fight Choreography for his work with The Elaborate Entrance of Chad Deity, and Alejandro Tey (Mace) was nominated for Performer in a Principle Role. Don't miss this rare opportunity to check out the show that the Tribune said delivers a power slam!

Tickets for this return engagement are FREE and can be reserved through the Chicago Park District! 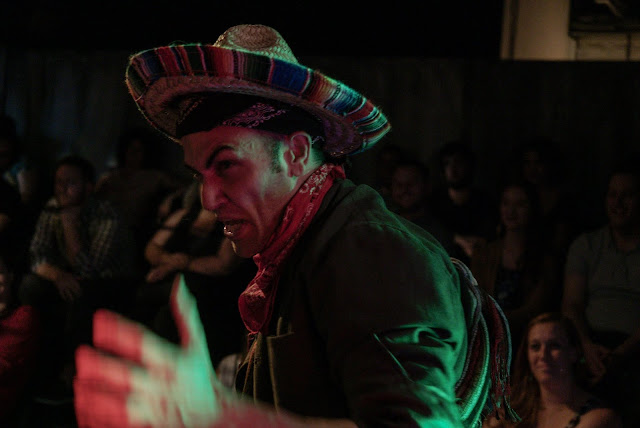 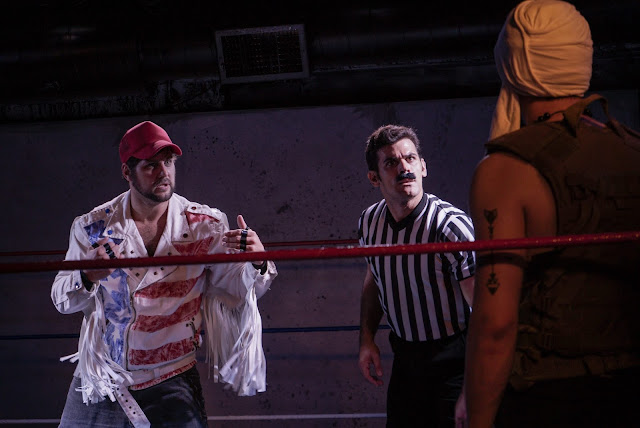 THE PLAY:
How does one pursue the "American Dream" in a country that refuses to offer opportunity indiscriminately? That is the question at the heart of The Elaborate Entrance of Chad Deity, an American satire set in the professional entertainment wrestling world. We follow Macedonio Guerra, an excellent Puerto Rican wrestler, as he rises from the bottom of the pecking order. In this interactive physical comedy, Mace talks directly to the audience as fans in his arena. The play dissects race, xenophobia, ego, and our moral compass - topics even more relevant now than when it premiered nine years ago. 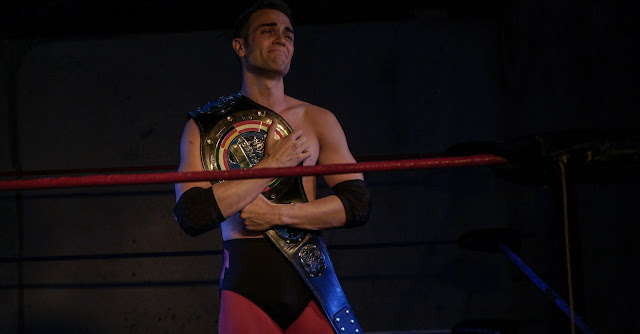 THE CAST:
Alejandro Tey as MACE, Harsh Gagoomal as VP, Breon Arzell as CHAD DEITY, Frank Stasio as EKO, Will Snyder as THE BAD GUY, and Dave Honigman as REFEREE.

ABOUT RED THEATER: Red Theater is a Jeff Award-winning company that asks dangerous questions, striving to deliver productions that go beyond entertainment, challenging an audience to interpret the themes and ideas presented on a personal level. Since 2008, our commitment to accessibility through every stage of the creative process also lowers the barriers of access, allowing all audiences to see new and reimagined works that broaden perspectives and inspire dialogue.
Posted by Bonnie Kenaz-Mara at 1:45 PM No comments: