SAVE THE DATES: 2018 SEASON ANNOUNCED FOR FOLKS OPERETTA 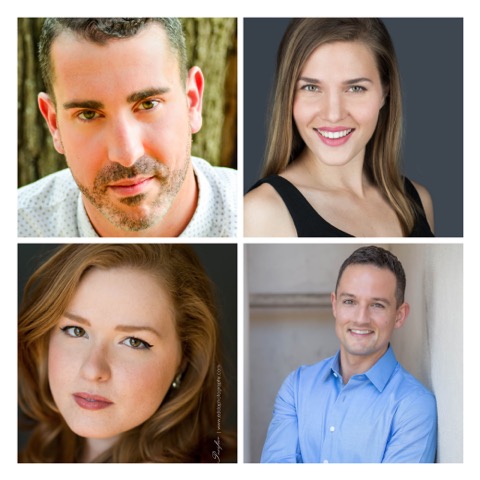 Folks Operetta is proud to announce its 2018 season and a new fundraising campaign, The Korngold Initiative. All of these projects are part of their new Reclaimed Voices Series, which focuses on recovering and reviving the lost music of the Jewish composers of the Second World War. The series grew out of their research on operetta and the disproportionate numbers of Jewish composers who were silenced both before and after the Second World War. Jewish composers of opera suffered a similar fate. In a world where old prejudices resurface and where a new generation demagogues seeks to draw new lines of division and enmity, the stories of these composers take on a new urgency. Their works need to be heard, their stories told, and their memories restored.

This season includes the fully-staged Emmerich Kálmán masterpiece, The Csárdás Princess, July 7 – 22; a multi-media concert, Forbidden Opera, Friday, October 18 and 21 and for families celebrating the Holidays, Franz Lehár’s children’s operetta Peter & Paul in the Land of Nod, December. Specific details for each event are listed below. Tickets are on sale and available at folksoperetta.org.

Folks Operetta’s 2018 season kicks off with Emmerich Kálmán’s operetta The Csárdás Princess. Kálmán’s mastery of the Viennese waltz and of the music of his native Hungary have made this show an enduring favorite in Europe. The story follows the ups and downs of the unlikely love affair between an aspiring young singer from the provinces and the scion of a wealthy Viennese family. Kálmán, as an assimilated Hungarian Jew living in Vienna, would have been well aware of the pitfalls of navigating the upper echelons of Viennese society. The Csárdás Princess, which takes aim at the rigid class divisions of Kálmán’s time, resonates in our own. Critics consider The Csárdás Princess to be Kálmán’s masterpiece.

Written in 1915, the show played on Broadway under the title The Riviera Girl in 1917 – just as the U.S. was entering “The War to End All Wars.” Broadway would not prove to be the boon that Kálmán had been seeking as it ran for only 78 performances. P.G. Wodehouse and Guy Bolton, who were responsible for The Riviera Girl’s book and lyrics, admitted that the fault lay with them, not with Kálmán. Wodehouse later wrote that “the Kálmán score was not only the best that gifted Hungarian ever wrote, but about the best anybody ever wrote.” With America’s entry into the War, anti-German sentiment was high, precluding more performances of the show. It would not be performed again in this country until 1932, when it was given at the St. Louis Municipal Opera and warmly received.

The Second World War would take a tremendous toll on Kálmán. Although he managed to escape, first to France and then to America, many of his relatives died at the hands of the Nazis. Settling in California, Kálmán suffered the indignity of having his music declared “degenerate” by the Nazis while finding himself in a strange country with no prospect of work. He tried writing film scores, but the industry proved to be a hard fit. He died in 1953, leaving his last show Arizona Lady, an homage to his adopted country, unfinished. (Folks Operetta gave the U.S. premiere in 2010.)

As part of the Reclaimed Voices series, Folks Operetta takes a look at the composers of opera that time has forgotten. During the Third Reich Jewish composers, as well as any composers whose music did not suit the Nazis, were banned and labeled degenerate. Some Jewish composers such as Gideon Klein, Viktor Ullman, Hans Krasa, Erwin Schulhoff and Pavel Haas, would perish in the Holocaust. The more fortunate ones (Ernst Toch, Hans Gál, Kurt Weill, Hanns Eisler, Arnold Schoenberg, Egon Wellesz and Erich Wolfgang Korngold) would ply their craft in their newly adopted homelands. For all of these composers, whether they survived the war or not, the post war years inflicted a further indignity; there was no one to champion their music after the war.

The concert Forbidden Opera will feature the work of these composers and the stories of their lives. This multi-media event will feature five singers, a small chamber group, a narrator and video projections.

Folks Operetta brings back Franz Lehár’s Peter and Paul in the Land of Nod, as part of its Reclaimed Voices series. Boasting nine ballet numbers á la The Nutcracker, this magical show was the first operetta Lehár wrote following his success with The Merry Widow. The librettists were Fritz Grünbaum and Robert Bodanzky. Grünbaum, a popular actor and cabaret performer and satirist,  would meet a terrible fate at the hands of the Nazis in the Second World War.

This wonderfully human story with its message of hope and love is a poignant reminder of the loss of writers such as Grünbaum and their contributions to art and music. The company will present this wonderful show in a new production with an English translation in rhyming verse by Hersh Glagov and Gerald Frantzen.  Featuring performers from the  Chicago Symphony  Orchestra  Chorus, children from the Children’s Operetta Workshop, a 15-piece orchestra, and leading ballet  dancers from the Chicago area, this is a holiday show not to be missed.


The Korngold Initiative
The Korngold Initiative is a two-year fundraising campaign to bring Erich Wolfgang Korngold’s rarely-heard opera, Die Kathrin (Kathrin), to Chicago for its American premiere. The goal is to raise $150,000 to employ local singers, actors, musicians, artists and designers for a new production of the opera at the Athenaeum Theatre in 2019. Folks Operetta’s version will be faithful to Korngold’s original intention to set the show in occupied Germany following the First World War. In keeping with Folks Operetta’s mission to make shows accessible, we will translate the libretto and perform the opera in English.

Erich Wolfgang Korngold was one of the most unjustly neglected composers of the twentieth century. A child prodigy, he was praised by Gustav Mahler and Richard Strauss and considered by many to be the successor to Mozart and Beethoven. His father, the prominent Viennese music critic Julius Korngold, was careful to nurture his son’s remarkable talent, securing composition lessons for the boy with Alexander Zemlinsky. Erich Wolfgang Korngold already had a sizeable body of work to his credit when he burst onto the world stage with his opera, Die tote Stadt, in 1923, at the tender age of 19.

Die Kathrin was Korngold’s last opera. He began working on it in 1933, when he was engaged in re-orchestrating some of the classic operettas of Johann Strauss Jr. and Leo Fall. A first performance, scheduled for 1938 in Vienna, was cancelled. This opera by a Jewish composer, depicting a love story between a German woman and a French soldier in French-occupied Saarland, was destined to run afoul of Nazi censors. The opera received its European premiere in Sweden in 1939, where it was given an overtly harsh and anti-Semitic review. To make matters worse, Die Kathrin was almost lost forever when the Nazis broke into Korngold’s villa to destroy his work. Michael Haas, in his book, “Forbidden Music, “writes: “Weinberger [music publisher] employees broke into the cellar, recovered what was left of the manuscript, and returned it to Korngold by interleaving sheets between pages of Beethoven, Mozart, and other acceptably ‘Aryan’ composers and posting them to the composer in California.”

Die Kathrin was finally given its Viennese premiere in 1950, but ran for only eight performances. In 1997, the BBC Orchestra created a complete recording of the work.

Since then, the work has seldom been performed. Its music, however, is compelling and masterfully written. It deserves another look. Folks Operetta is uniquely suited to the task of reviving Korngold’s masterpiece.


ABOUT FOLKS OPERETTA
Folks Operetta is a 501(c)(3) non-profit theater company devoted to the nurturing of live operetta through articulate and dynamic productions. In the belief that the arts serve to illuminate the human condition, Folks Operetta is dedicated to the revival and development of operetta, a popular and accessible form of music and theater for general audiences. In particular, the Folks Operetta concentrates on producing both Viennese and American operettas from the early 20th century. Our mission also includes recovering the lost operas of Jewish composers who suffered or perished during The Second World War.