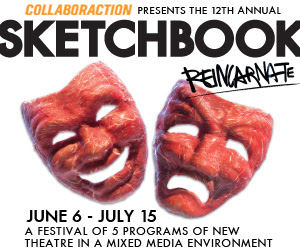 Sketchbook is baaaack.   We've been giving you the heads up about Collaboraction's latest for a while now, but today's the day it all begins again.   So, high tail it over to the Flat Iron Building in Wicker for total theatre immersion....or check out the shows at a more leisurely pace from now through July 15.


COME TO THE FESTIVAL THIS OPENING WEEKEND AND SEE ALL THE SKETCHBOOK: REINCARNATE SHOWS IN ONE DAY!


CLICK HERE and check out the new SKETCHBOOK:REINCARNATE website which gives you detailed information on each of the shows featured in this year's festival, as well as a calendar of events, ticket/pass purchasing and media coverage.

Here's the latest scoop including line up changes:

Collaboraction’s annual SKETCHBOOK festival will feature an additional program, THE INTERVIEW, an unscripted theatrical experience that breaks new ground in documentary theater, written by Lawrence Bridges and directed by Ian Forester. Mr. Bridges, a seasoned experimental documentary and feature film director, has crafted a set of instructions for a solo performer, which prompt an unexpectedly personal and spontaneous theatrical experience. As the actor responds with stories and personal accounts to these previously unheard instructions, the play unfolds along a hidden arc, resulting in an unforgettable encounter between audience and performer. Since THE INTERVIEW can be done only once by a performer, no two shows will ever be the same. Part theater and part social experiment, THE INTERVIEW promises to be a funny, poignant, and thought-provoking examination of the human condition.

Appearing in THE INTERVIEW will be John Wilson, company member and storyteller on June 9 and the recording artist known as Himself on June 10 with many more throughout the festival which closes July 15. THE INTERVIEW runs 45 minutes.

Ian Forester is an actor and award-winning theater director, having won the 2008 LA Weekly Award for Best Comedic Direction for his production of John Clancy's “Fatboy.” Film credits: “In Memoriam,” “Sketch,” “Breathing Room.” Chicago theater: “Cadillac,” Chicago Dramatists (dir. Ed Sobel); “The Intelligent Design of Jenny Chow,” Collaboraction; “Men of Steel,” Theater Wit; “The Last Days of Judas Iscariot,” Steep Theater; and “Guinea Pig Solo,” Collaboraction. In Chicago Ian directed for Stage Left and Collaboraction, where he was formerly an Associate Artistic Director. He is a co- founder and Artistic Director of needtheater in Los Angeles, where he developed and directed The Interview with Mr. Bridges for its world premiere. He is a graduate of Northwestern University and The School at Steppenwolf.

Lawrence Bridges is best known for his creative work in the film and literary world. He founded the acclaimed film production and design studio, Red Car, and has directed several hundred commercials and music videos, features, and documentaries. Stanley Kubrick has called his work in film “visual poetry.” More recently, he directed a series of six documentaries on prominent American authors for the NEA’s “Big Read” initiative, which include Ray Bradbury, Amy Tan, Rudolfo Anaya, Ernest J. Gaines, Tobias Wolff, and Cynthia Ozick. Bridges’ poetry has appeared in The New Yorker, Poetry, and most recently, The Tampa Review.

What can you expect from SKETCHBOOK: REINCARNATE?
You’ll see some of Chicago’s most exciting theatre artists pushing the form in a social, mixed-medium environment. Real food will be used in an exploration of the assumptions we make and the connections we have to death row inmates and their final meals. You’ll help resolve a whodunit turned on its head. You’ll meet Chicago librarians in a battle to preserve the boundaries of reality and an overlarge buffoon who goes by “Honeybuns.” Not to be outdone, Nellie Bly, First Woman Reporter, interviews Mary Fons in a comedy about being gutted alive. And this is only the beginning of Sketchbook 2012!

SKETCHBOOK: REINCARNATE will feature five programs in both of Collaboraction’s spaces in the Flat Iron Arts Building. Collaboraction has officially moved into both Studio 300 and Studio 336 to provide programming throughout the year in these two spaces.

SKETCHBOOK: REINCARNATE will run June 6 – July 15. Tickets are $20 for individual programs and $65 for an all access pass and can be purchased by calling 312-226-9633 or online at www.collaboraction.org.

Posted by Bonnie Kenaz-Mara at 9:41 AM No comments: