REVIEW: Art Imitates Life at Gift Theatre's World Premiere of A Swell In The Ground

The Gift Theatre Presents the World Premiere of
A SWELL IN THE GROUND
By Janine Nabers
Directed by Ensemble Member Chika Ike
Through December 10, 2017 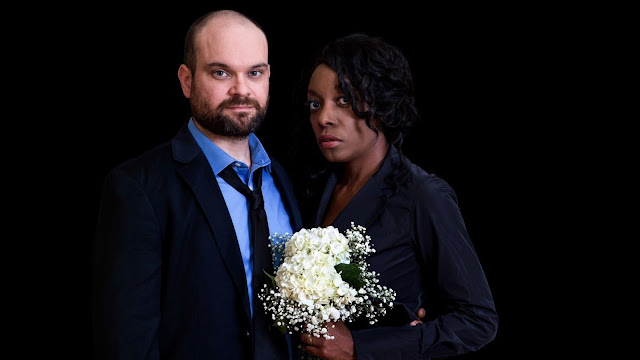 All Photos by Claire Demos

Review:
Here at ChiIL Live Shows, we've long enjoyed the tiny but mighty Gift Theatre. With just 45 seats, the smallest equity theatre in town is a great local for intimate dramas, and they excel at maximizing their minuscule performance space. The staging for A Swell In The Ground is no exception. They play up, with two tiers, for an effective illusion of extra room, and they have a clever swinging stage wall that opens up another space. Even the audience seating is rearranged for this one, to wrap around the stage in an L shape. 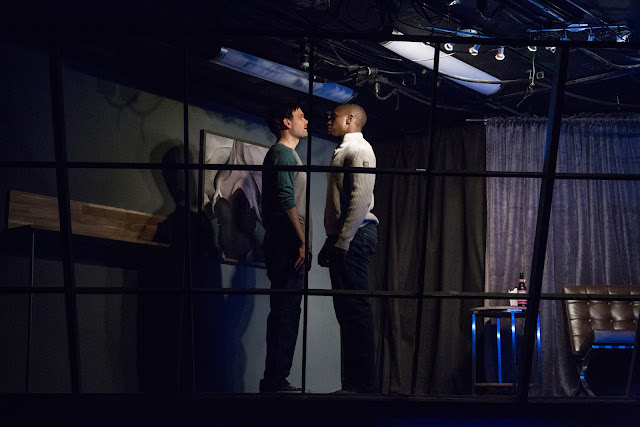 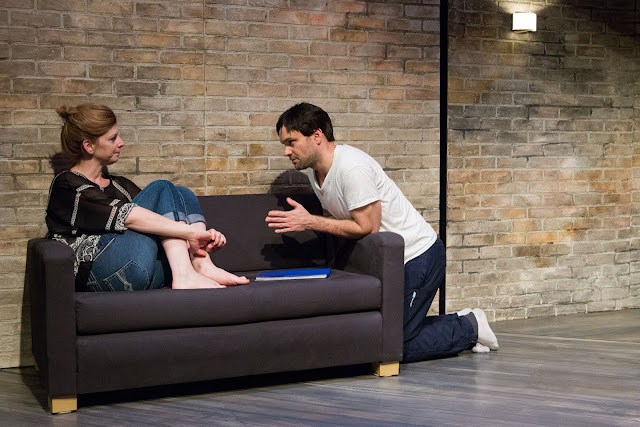 The acting is compelling, though the script jumps back and forth through time in a dizzying, non linear fashion that comes across as unnecessarily confusing. The Gift has done a helpful job of projecting the dates on the wall, to help orient the audience, yet it's still a bit jolting and difficult to follow at times. 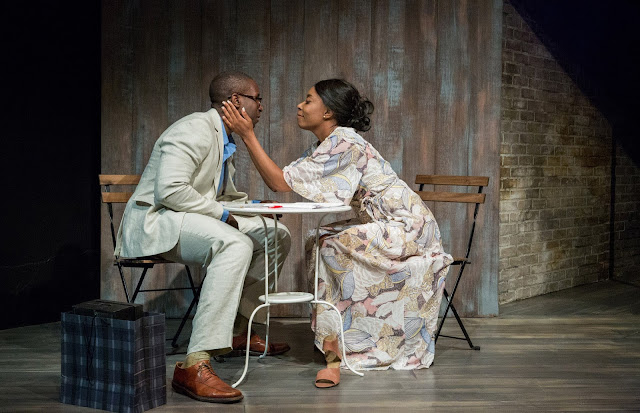 This is not one of my favorites, of many excellent choices I've seen at The Gift for years. It's still worth a look, but the piece comes across more like keeping up with friends on Facebook for decades, with mundane predictability and without much plot. Sure there were some untimely parental deaths, new love, disillusion, infidelity, divorce, and eventually parenthood, but it's all fairly standard stuff. The actors do a fine job with the material, but none of the characters are written in quirky and interesting enough ways to be standouts, or have much of a story arc, growth or change. 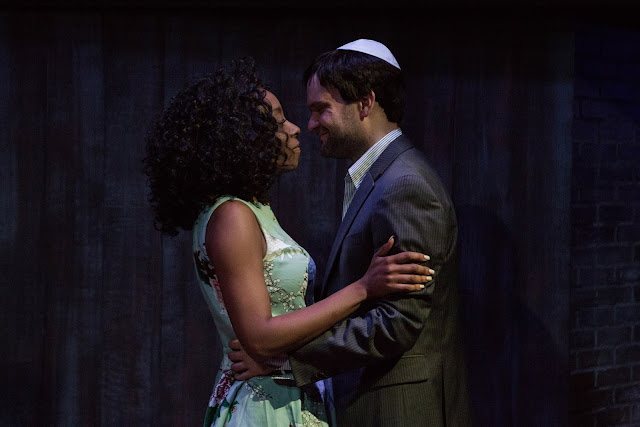 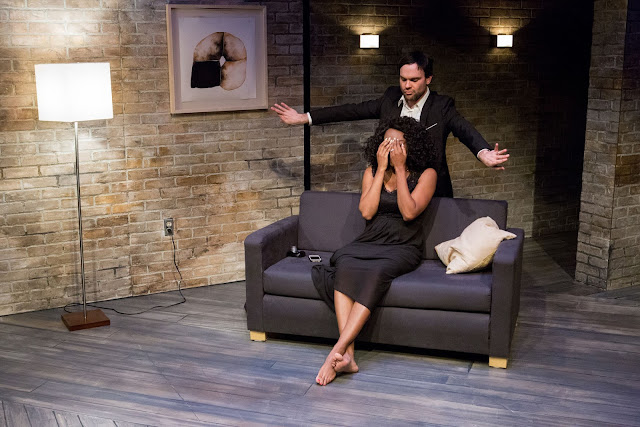 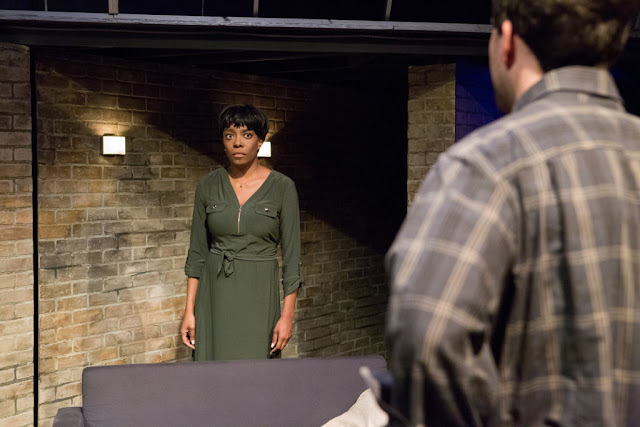 About the Play:
In intimate rooms throughout New York and Michigan, four friends from college fight through 17 years of love affairs, shattered dreams and compromised lives. Flipping back and forth through time like a photobook, this play – whose title is from a line of Emily Dickinson poetry – is equally breathtaking and heartbreakingly spare as Olivia, Nate, Abigail and Charles try to reconcile the lives they imagined with the lives they live.

The Gift Theatre concludes its 2017 season with the world premiere of Janine Nabers’ time-hopping love story A SWELL IN THE GROUND directed by ensemble member Chika Ike, playing October 13 – December 10, 2017 at 4802 N. Milwaukee Ave. in Chicago. Tickets are currently available by calling the Gift’s box office at 773-283-7071 or visiting thegifttheatre.org.

Conceived while students at The University of Iowa in 1997 by Michael Patrick Thornton and William Nedved, the idea for The Gift was to grow and nurture an ensemble and lay roots in an artistically underserved Chicago neighborhood. Heavily influenced by a class called “Alternative Approaches To Acting” taught by Dr. Eric Forsythe, the name of the theatre came from Jerzy Grotowski’s Towards A Poor Theatre:

“Acting is a particularly thankless art. It dies with the actor. Nothing survives him but the reviews, which do not usually do him justice anyway, whether he is good or bad. So the only source of satisfaction left to him is the audience’s reactions. The actor, in this special process of discipline and self-sacrifice, self-penetration and molding, is not afraid to go beyond all normally acceptable limits…The actor makes a total gift of himself.”

The ensemble is composed of actors, directors, writers, and improvisers. For over ten years, The Gift has earned and deepened its reputation as an ensemble dedicated to acting of the highest caliber and a welcome home for new plays. Natural Gas, giftED., giftLIT. and giftFILM offer, respectively, improvisation performances steeped in the Chicago “long form” tradition of montage, a two year high school training apprenticeship rich in the ensemble approach toward making theatre, a literature department offering readings and workshops, and a film company featuring the talents of the ensemble.

The open hand logo is a representation of an approach for building a character called “Three Parts of the Body.” The hand represents body (wrist), heart (palm), and mind (fingers). The three lines represent love, life, and the ability to overcome obstacles. The colors of The Gift are a nod to both The University of Iowa and the original cover design of Towards A Poor Theatre, both of which feature yellow & black.

Mission Statement
The mission of The Gift is to tell great stories onstage with honesty and simplicity.

The Gift believes a play never closes until everyone who saw it stops thinking about it and that art is, at its best, a sacred conversation between actor and audience, revealing the joy and pain of being human. In other words, a gift.

A SWELL IN THE GROUND features ensemble members Keith Neagle as Nate and Darci Nalepa as Abigail with guest artists Sydney Charles as Olivia and Andrew Muwonge as Charles. 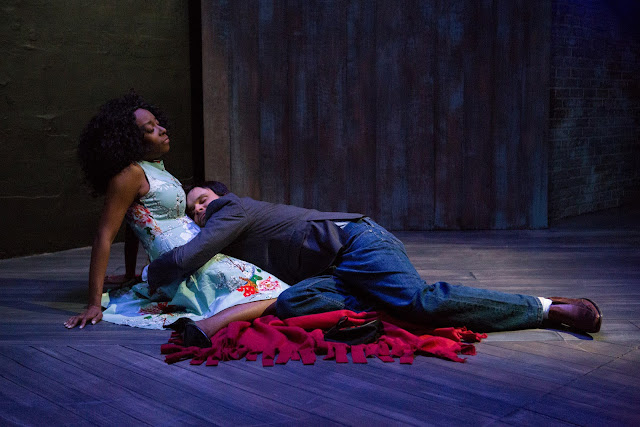 (left to right)  Sydney Charles and Keith Neagle in The Gift Theatre’s world premiere of A SWELL IN THE GROUND by Janine Nabers, directed by ensemble member Chika Ike.
Photo by Claire Demos.


About the Artists:
Janine Nabers (Playwright) is a native of Houston, Texas and a 2013 graduate of the Lila Acheson Wallace Playwriting Fellowship at Juilliard and winner of the 2014 Yale Drama Series Prize for her play Serial Black Face. She currently writes for Lifetime’s Unreal and Bravo’s Girlfriends’ Guide to Divorce under Marti Noxon. Her play Annie Bosh is Missing premiered in August 2013 at Chicago’s Steppenwolf Theatre Company. Janine won the 2013 NYFA Playwriting fellowship and was the 2013-2014 AETNA Playwriting Fellow at Hartford Stage, a 2012-2013 New York Theatre Workshop Playwriting Fellow, and Page 73’s 2011 Playwriting Fellow. Janine is working on commissions from Primary Stages, the Alley Theatre, and Hartford Stage. Her new musical Mrs. Hughes was developed as the 2012 Williamstown Theatre Festival fellowship musical and was part of the 2013 Yale Institute for Musical Theatre, Manhattan Theatre Club’s 7@7 series, and the Theatreworks New Works Now Festival.

Chika Ike (Director) is a Gift ensemble member, where she also served as the​ assistant director of The Royal Society of Antarctica. Ike has worked artistically with many Chicago and regional theatre companies, including Berkeley Repertory Theatre, Victory Gardens, American Blues Theatre Company, Eclipse Theatre, and Prologue Theatre Company. Upcoming directing projects include Lloyd Suh’s Franklinland for Jackalope Theatre Company and Dontrell who Kissed the Sea by Nathan Alan Davis for First Floor Theatre Company, as well as reading of Tori Sampson’s This Land was Made for Victory Garden’s Ignition Festival of New Plays. She is a former SDCF Gielgud Fellow, a member of the inaugural Victory Garden’s Directors Inclusion Initiative class, and the 2016-2017 Berkeley Repertory Theatre Bret C. Harte Directing Fellow.

Posted by Bonnie Kenaz-Mara at 11:21 PM No comments: