OPENING: Chicago Premiere of QUEEN OF THE MIST Via Firebrand Theatre at The Den Theatre May 25 – July 6, 2019

Firebrand Theatre is pleased to present the Chicago premiere of QUEEN OF THE MIST, based on the sensational true story of Anna (Annie) Edson Taylor, the first woman to go over Niagara Falls. Featuring book, music and lyrics by Michael John LaChiusa (The Wild Party, Marie Christine), direction by Elizabeth Margolius and music direction by Charlotte Rivard-Hoster, QUEEN OF THE MIST will play May 25 – July 6, 2019 at The Den Theatre’s Janet Bookspan Theatre, 1331 N. Milwaukee Ave. in Chicago. Single tickets are currently available at firebrandtheatre.org.

QUEEN OF THE MIST is based on the astounding and outrageous true story of Anna (Annie) Edson Taylor, who in 1901 set out to be the first person to go over the Niagara Falls in a barrel of her own design. Navigating both the treacherous Falls and a fickle public with a ravenous appetite for sensationalism, this unconventional heroine vies for her legacy in a world clamoring with swindling managers, assassins, revolutionaries, moralizing family, anarchists and activists. With a soaring score that incorporates turn of the century themes with LaChiusa’s signature complexity and insight, QUEEN OF THE MIST is the story of a single great fall, and how one woman risked death so that she could live.

Firebrand is the first musical theatre company committed to employing and empowering women by expanding opportunities on and off the stage.

About The Creative Team
Elizabeth Margolius (Director) is a Chicago-based stage and movement director with a primary focus in developing and directing new and rarely produced musical theatre, operetta and opera. Stage/movement directorial credits include: James and the Giant Peach (Viterbo University, WI), Machinal (Greenhouse Theater Center), The Bridges of Madison County (Peninsula Players, WI), Uncle Philip’s Coat (Greenhouse Theater – Jeff nomination for Best Solo Peformance), Haymarket: The Anarchist’s Songbook (Underscore Theatre – 3 Jeff nominations, including Best New Musical), Sitayana (Gift Theatre’s TEN Festival), The Girl in the Train (Chicago Folks Operetta), Goldstar, Ohio (ATC), The Merry Wives of Windsor (Chicago Shakespeare Theater, asst. director to Barbara Gaines), The Mikado (the Savoyaires), The Last Cyclist (Genesis Theatrical), The Land of Smiles and The Cousin from Nowhere (Chicago Folks Operetta), Opus 1861 (City Lit Theater – 3 Jeff nominations, including Best Adaptation), Violet (Bailiwick Chicago –5 Jeff nominations, including Best Musical and Best Director), Bernarda Alba and Songs for a New World (BoHo Theatre). Elizabeth is an alumna of the Lincoln Center Theater Directors Lab in New York, a recipient of a full directorial scholarship at the Wesley Balk Opera-Music Theater Institute in Minneapolis, a respondent and workshop artist for the Kennedy Center’s American College Theatre Festival and a finalist for the Charles Abbott Fellowship. She is the Co-Founder and Artistic Director Emeritus of DirectorsLabChicago; a forum for emerging nationally and internationally based stage directors. Elizabeth is a proud member of the American Guild of Musical Artists (AGMA) and the Stage Directors and Choreographers Society (SDC).

Charlotte Rivard-Hoster (Music Director) is proud to make her debut with Firebrand! Favorite credits: Legally Blonde, Wizard of Oz (Paramount), Fun Home (Victory Gardens), Marry Me a Little (Porchlight), Urinetown (BoHo), Bat Boy (Griffin), Heathers (Kokandy), Methtacular! (About Face), The Light in The Piazza (Berklee). Charlotte has taught at The Chicago Academy for the Arts, Lake Forest College, Roosevelt, Merit School of Music, and this winter she continues her seventh year with the little musicians at Kellman Elementary through Foundations of Music. With immense gratitude to those I love and lean on, and to those who open doors and leave them open.

Firebrand Theatre is a musical theatre company committed to employing and empowering women by expanding their opportunities on and off the stage. Firebrand is a 501(c)(3) Equity theatre. 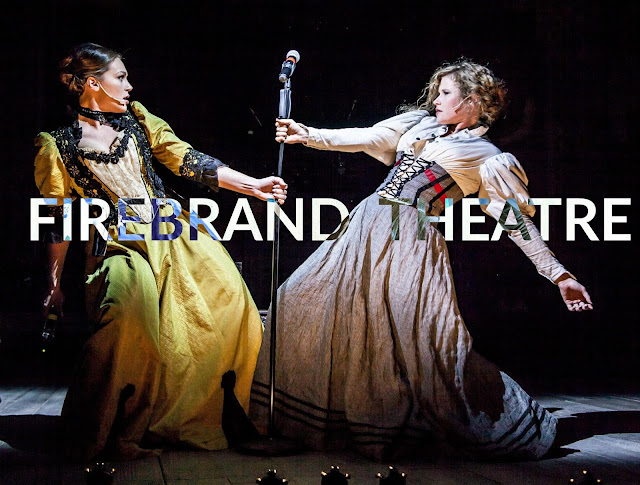 Posted by Bonnie Kenaz-Mara at 7:02 AM No comments: