REVIEW: Ghosts of Ibsen and Gore Galore at Akvavit's Ghosts and Zombies Through 10/29/17 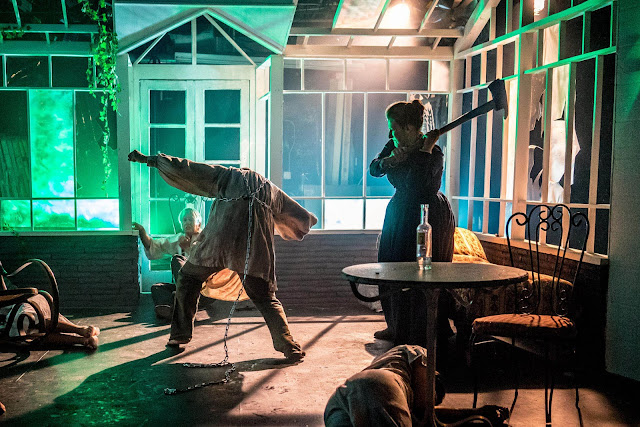 (left to right)  Micah Kronlokken, Victor Bayona and Marsha Harman with the cast of Akvavit Theatre’s production of GHOSTS & zombies.
All Photos by Karl Clifton-Soderstrom.

Review:
I must say, this is the most thought provoking production with a blood splatter zone that I've ever seen. There are enough ax murders to make Lizzy Borden blush, and quite a few deaths by gunfire too. What's an outwardly fine, upstanding, philanthropic family without a few skeletons in the closet and in this case, zombies in the cellar as well? Ghosts and Zombies is high camp, to be sure, yet the script is surprisingly multilayered and nuanced. 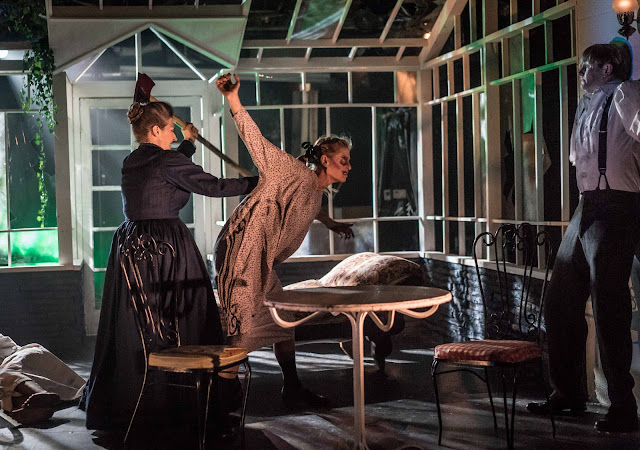 Staging is quite clever, with ample windows for optimal zombie viewing and access. The cellar is also a great off stage space, ripe for the imagining. Though a one room set is all that's shown, the four off stage spaces are brought vividly to life. 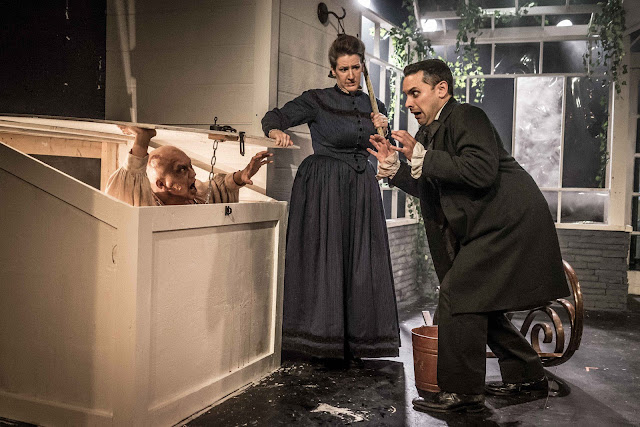 Pastor Manders (Jeremy Trager) is a fascinating character in both his arrogance and fanaticism. His character flaws and courses of action speak volumes, and his facial expressions and agonizing transformation are something to see. This is as much a fight against internal as external monsters. 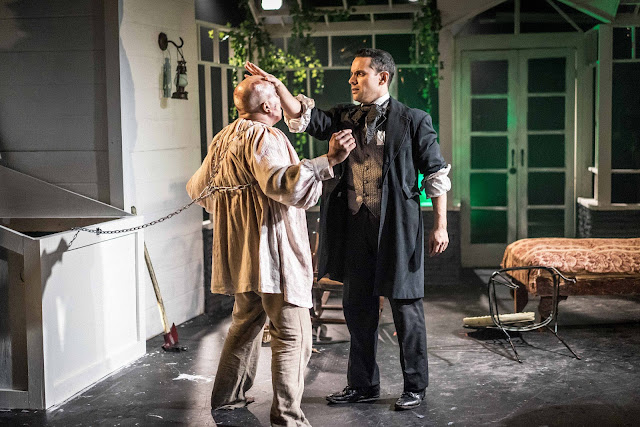 There are even feminist overtones, as the smart and capable family matriarch, Mrs. Helene Alving (Marsha Harman), struggles with the soul eating burden of a philandering, drunk, ailing husband, and a lack of recognition for her own accomplishments. Victor Bayona is as horrifying as he is hilarious as zombie Chamberlain Alving. Chafing against the constraints of duty, responsibility and expectation for too many years, Helene Alving is driven, determined and delightfully jaded. Just as she seems finally free to escape the ghosts of hidden family secrets and the zombies of burdensome living relatives, history is doomed to repeat. 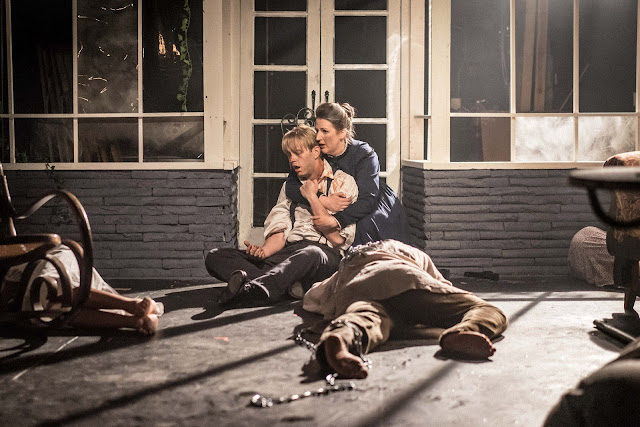 (back, l to r) Micah Kronlokken and Marsha Harman with the cast of Akvavit Theatre’s production of GHOSTS & zombies.


Catch GHOSTS & zombies while you still can. They'll be lurching off into the darkness after 10/29, just in time for Halloween.

Here at ChiIL Live Shows we're ready for the fall chill in the air and a touch of the macabre. We're also jazzed for Akvavit's latest, an updated spin on Ibsen by contemporary Swedish playwright, Gustav Tegby.

I'm descended from Swedes who came to Chicago on a boat so rickety it sank on the return voyage! This is my heritage and ancestry and I adore the Akvavit's poetic mission statement. 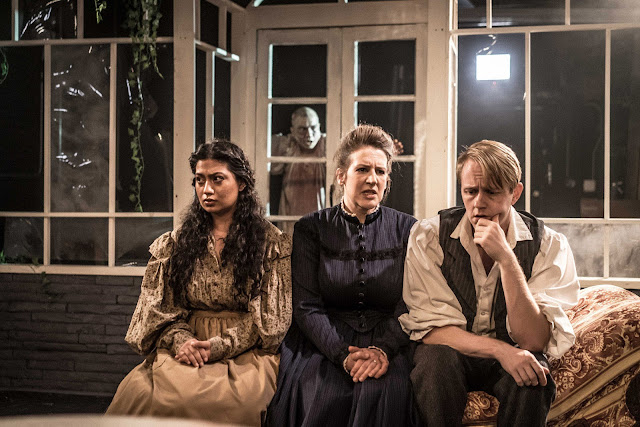 
Just in time to get you in the Halloween spirit, Akvavit Theatre is pleased to present GHOSTS & zombies, by Henrik Ibsen and Gustav Tegby, in a new American translation by Chad Eric Bergman*, directed by Co-Artistic Director Breahan Pautsch*. This dark and hilarious contemporary Swedish twist on Ibsen’s Norwegian classic Ghosts, will play September 28 - October 29, 2017 at the new Strawdog Theatre Company, 1802 W. Berenice in Chicago. Tickets on sale at chicagonordic.org.

GHOSTS & zombies puts a blood-curdling spin on Ibsen's classic drama, Ghosts. As in the original, Mrs. Alving is preparing to open an orphanage in her husband's memory, while welcoming her son home from a long absence. However, things soon take a turn for the weird and scary as their country estate becomes overrun by the un-dead. Haunted by the ghosts of her past, Mrs. Alving now finds herself confronted by zombies that she is forced to stand and fight. GHOSTS & zombies shows us that we can try to bury the parts of our life we would rather forget, but we cannot control whether they walk again – slowly, hungrily – in our direction. 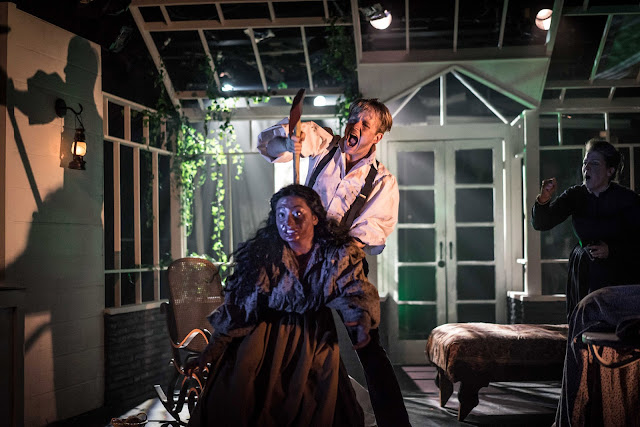 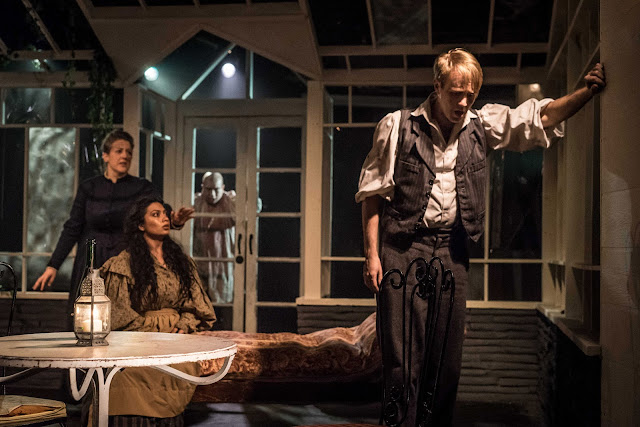 Artist Biographies
Gustav Tegby (Playwright) was born in Umeå, Sweden in 1980, where he also grew up. He has written about twenty plays played at, among others, Drama, Malmö City Theater, Uppsala City Theater and a number of different free groups across Sweden, as well as in Finland and the USA. Among the titles noted, Gargantua was released to Bibu in 2014 and Everyone Loves Bernie Madoff, a raid scene version of the true and completely unlikely story of Wall Street's greatest scammers. The latter was set up on three different theaters and was also filmed for SVT's project Pulse in Sweden. As a dramatist, Gustav has been interested in popular culture, and especially for the horror genre – he has among other things given Ibsen's Gengångare an odd twist in his variant Ghosts & zombies, where the infection of Mrs. Alving's son is drawn to something worse than syphilis. In the summer of 2016 he was one of the authors of Sweden's Radio Drama's major success, The Voices of the Dead, a fictional horror documentary in eight parts. Gustav had previously run the Drama Cup for many years. He also works as a dramaturg at the National Theater.

Chad Eric Bergman (Translator) actively collaborates in the Chicago storefront scene having worked with Stage Left, Live Bait, Chicago Dramatists, MPAACT, parker, Plasticene and Akvavit in various artistic ways. He has been an artist in residence at the Ragdale Foundation and the University of Chicago’s Summer Incubator. He spent a year in Finland on a Fulbright exploring bilingual theatre. At North Park University, he has been developing a theatre curriculum that is based on the Chicago storefront theatre model.

Breahan Eve Pautsch (Director) is originally from Chippewa Falls, Wisconsin. She earned her BA in Theatre and English at UW-Madison and has been working in Chicago as an actor and director since 2003. She has been a company member with Akvavit Theatre since 2011, where she served as Literary Manager and Director of Development for several years before taking the position of co-Artistic Director at the beginning of 2017. She is also a company member with Indie Boots Theatre. 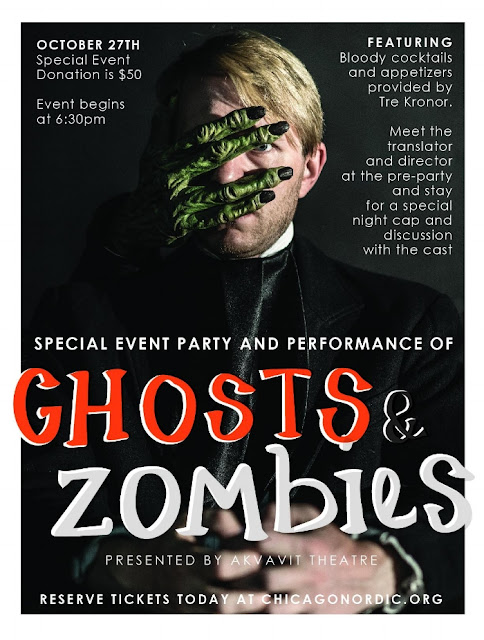 Posted by Bonnie Kenaz-Mara at 7:35 PM