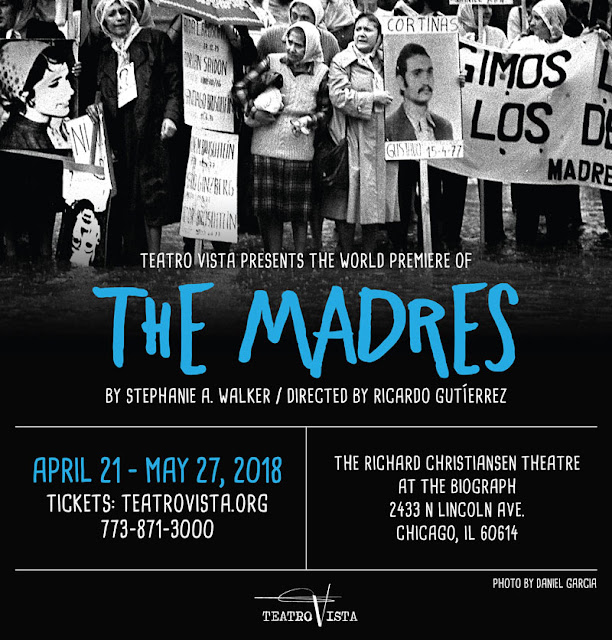 ChiIL Live Shows will be out to review the World Premiere of The Madres at Victory Gardens on April 29th. The story of Argentina's terrifying reign of state sanctioned abductions and incarceration should have a voice on stage. I'm glad to hear Teatro Vista's staging this powerful work and bringing awareness of the tragedies that have been occurring for generations to Chicago audiences. Check back soon for my full review.

Set in the late 1970s during Argentina’s notorious Guerra Sucia, or “Dirty War,” The Madres by Stephanie Alison Walker tells the empowering story of three generations of women - a grandmother, a mother and a daughter - and their desperate attempt to keep their family intact in the face of state-sponsored intimidation, kidnappings and murder. 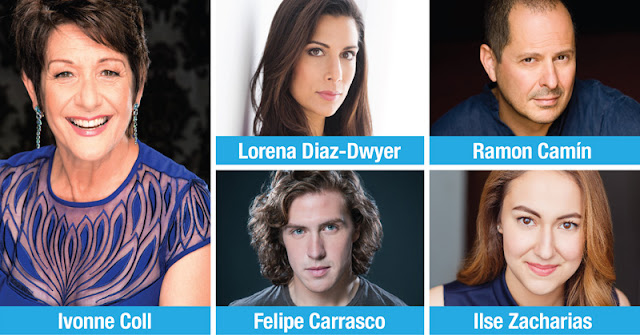 For tickets and group discounts, visit TeatroVista.org, call the Victory Gardens box office, (773) 871-3000, or visit Victory Gardens (The Biograph) during box office hours. Metered, street and valet parking is available near the Biograph. The theater is easily accessed on the CTA Red, Purple and Brown lines via the Fullerton stop. The CTA 8 Halsted and 74 Fullerton buses also stop at Fullerton and Halsted, 1/2 block south of the theater. For more information, visit VictoryGardens.org/PlanYourVisit.


Más about The Madres (The Mothers)

It's 1979 in Buenos Aires, Argentina where people are disappearing right off the street. The so-called "Dirty War" waged by the military Junta against its own people is in full-swing. Carolina and her mother Josefina are searching for “Caro’s” pregnant daughter Belén, who has been missing for twelve weeks. Then they receive a surprise visit from a priest who is now the chaplain to the military at ESMA, a known concentration camp. Next to drop by is Diego, a young soldier from the neighborhood, also stationed at ESMA. Their visits lead Josefina and Carolina to devise a plan to try to see Belén one last time. Will it work? Will they save her baby? Will they be able to save themselves?

The “Dirty War” was the name the Argentine military dictatorship used for a period of state terrorism in Argentina from roughly 1974 to 1983, who targeted anyone believed to be a subversive or in any way associated with socialism. This included students, artists, journalists, political activists, mothers looking for the disappeared, nuns and anyone who spoke out against the military's reign of terror. As estimated 30,000 Argentines disappeared and were never heard from again. 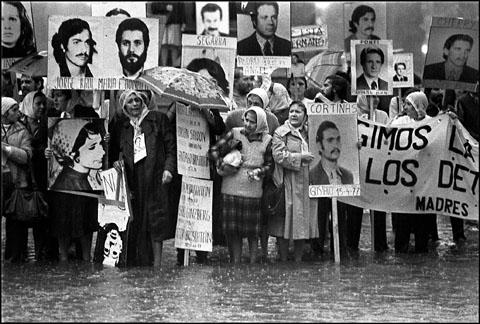 Las Madres, also known as the Mothers of the Disappeared or Madres de los Desaparecidos, are a group of brave women who, when public protest was outlawed by the military dictatorship, marched in front of the Casa Rosada (Pink House) demanding the truth about the whereabouts of their missing children and later, grandchildren. Three of the original founding members ended up among the "disappeared." They began marching every Thursday in 1977 and continue marching today.

Teatro Vista’s production of The Madres is presented with support from the National New Play Network (NNPN) Rolling World Premiere initiative. With support from NNPN, The Madres will receive four consecutive productions in 2018, kicking off in Los Angeles with Skylight Theatre Company, then Chicago at Teatro Vista, followed by San Diego at Moxie Theatre and Austin with Shrewd Productions. NNPN’s Rolling World Premiere program supports three or more theaters that choose to mount the same new play within a 12-month period, allowing the playwright to develop a new work with multiple creative teams in multiple communities. The playwright is part of the process, working on the script and making adjustments based on what is learned from each production. For more information, visit nnpn.org.

Teatro Vista produces, develops and commissions plays that explore the wealth and variety of the human experience from a Latinx perspective. The company provides work and professional advancement opportunities for Latinx theatre artists, with special emphasis on the company’s ensemble members, and seeks to enhance the curricular goals of Chicago students through theatre. Teatro Vista was recently celebrated as one of “Chicago’s Cultural Leaders” by the Arts & Business Council of Chicago and received the League of Chicago Theatre’s Artistic Leadership Award.

Teatro Vista’s primary focus is producing new works by Latinx theatre artists and presenting classic plays featuring artists of color. Its artistic vision is shaped by the company’s ensemble members, a group of multi-generational, multi-ethnic and multi- disciplinary artists. They inform Teatro Vista’s artistic aesthetic by devising original works as well as by selecting plays with themes that are engaging and relevant to Chicago’s diverse population.

Teatro Vista was founded in 1990 by Edward Torres and Henry Godinez. As Teatro Vista’s first Artistic Director, Godinez guided the company during the formative years. He helped stage successful productions and establish vital relationships with other theatre companies and artists. When Godinez stepped down, Torres was appointed Artistic Director. Under Torres’ direction, Teatro Vista used the stage to engage, connect and challenge audience members using the company’s mission as his guide.

In 2012, Torres moved to New York and the Board of Directors promoted Associate Artistic Director Ricardo Gutiérrez to the position of Executive Artistic Director. In 2017, Sylvia Hevia joined Teatro Vista as Managing and Development Director. Previously, Hevia was Director of Marketing and Development of the International Latino Cultural Center and had her own multicultural event production company.