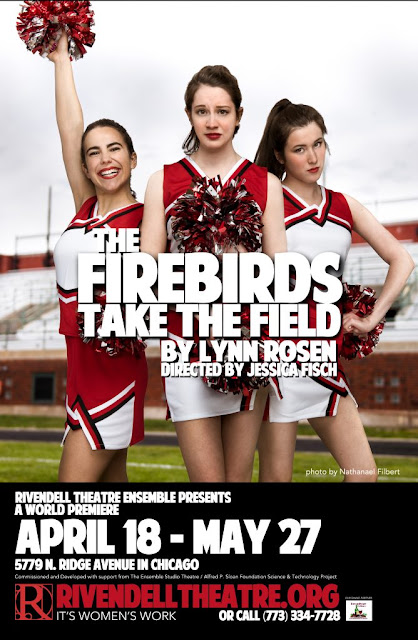 ]
Tonight we'll be ChiILin' on Chi, IL's north side with Rivendell Theatre Ensemble (RTE), Chicago’s only Equity theatre dedicated to producing new work with women at the core! It press opening time for the world premiere of The Firebirds Take the Field by Lynn Rosen and directed by Jessica Fisch. Check back soon for our full review. 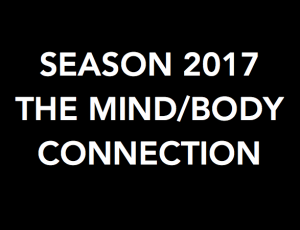 Schedule: Thursdays-Saturdays at 8:00pm
Saturdays at 4:00pm (no Saturday performance Saturday May 27)
Town Hall Discussions will follow the Saturday matinees 4/6; 4/13; 4/20

**Pay What You Can: Five seats (10% of the house) are available for each performance. Reservations are made on a first come first served basis.


It's been 25 years since molecular neuroscientist Avery Kahn left Highland Falls, NY. But when 18 local girls, cheerleaders mostly, are stricken with a mysterious ailment, Avery reluctantly returns home to tackle what the locals derisively call the “girl disease.” As Avery becomes affected—and infected—by the girls, the case becomes more personal than she ever expected. Based on actual events, Firebirds is a fascinating and often hilarious investigation of how women in particular are impacted by the pressures of growing up.

The Firebirds Take the Field was inspired by real events in LeRoy, New York in Fall 2011.  Camera crews descended on the small town when over a dozen teenagers from the same high school developed similar mysterious symptoms, including uncontrollable twitching, tics and verbal outbursts.

“The play takes place in a dying industrial town stunted by years of decay, where going to ‘the game’ and rooting for victory still mean something and winning gives the town worth and hope,” said director Jessica Fisch. “Pretty, athletic, smiling, golden girls are responsible for rallying the spirits of their community, but to be seventeen and believe your value is inextricably tied to your looks, youth, and exuberance is a recipe for destruction. Off the field, the girls are grappling with challenges and instability without the maturity or vocabulary to handle them. The girls bury their concerns and ignore their own grief, trauma, sadness, and hardship, but the weight of their repression proves too much and their bodies begin to rebel. By ignoring those emotions they deny themselves the process of healing. It turns out, the human body will find a way to grieve.”

“I was surprised when researching the real stories of the teens from LeRoy, New York, to learn that their final diagnosis of ‘Conversion Disorder’ was just a new name for ‘female hysteria.’ Women, in particular, who are diagnosed with mental issues are immediately dismissed both from the medical profession and by society as their conditions are not seen as being ‘real’," comments Artistic Director Tara Mallen. “Yet history and myth are filled with stories of girls exhibiting bizarre symptoms around the time of puberty — and doctors have pondered the connection between our mental and physical health for centuries. The cautionary of tale these three girls exemplifies the sometimes devastating results when we disregard this essential connection.” 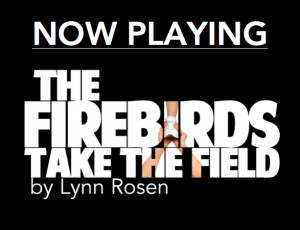 Lynn Rosen (Playwright) has had works produced or developed with: Actors Theatre of Louisville, TheatreWorks (Silicon Valley), Women's Project, New Georges, Ensemble Studio Theatre (two EST/Sloan commissions), Centerstage (Baltimore), Studio Theatre, Working Theater, Barrington Stage, The New Group, The Lark, terraNOVA Collective, New Harmony, GEVA, Fault Line Theatre, The Brick Theater, Red Bull Theatre, Todd Mountain Theater Project, The Lark Development Center (Writing Fellow), 52nd Street Project, among others. Lynn was commissioned in 2016 by UCSB for her new play Bernhard which was just produced in their acclaimed Launch Pad series. She also co-writes and co-created the award-winning web series Darwin, directed by Carrie Preston, with whom she is developing two TV pilots. Darwin was named one of the “Top Ten Best Web Series of 2015” by Paste Magazine and season two is currently in production. Her short piece The Amazing America Auction, originally commissioned for Centerstage, is included in Hal Hartley’s feature film My America. Coming up: Gurley! (a musical about Helen Gurley Brown), TheatreWorks Silicon Valley Writers’ Retreat; I Love You with Playing On Air; Washed Up On The Potomac with The Pool, NYC. Lynn got her B.A. in Theatre Arts from Brandeis University and is currently a Resident Playwright at New Dramatists in NYC.

Tara Mallen (Kathy) is an actor, director, producer and the Artistic Director at Rivendell Theatre Ensemble.  She was most recently on stage in RTE’s production of Grizzly Mama and  the world premiere production of Lynn Nottage’s Sweat at Arena Stage. Prior to that she was in RTE’s Jeff Nominated, world premiere productions of Look, we are breathing and Rasheeda Speaking. Tara appeared in the Steppenwolf Theatre Company production of How Long Will I Cry: Stories of Youth Violence written by Chicago Journalist Miles Harvey. She was part of the ensemble in Rivendell’s World Premiere, Jeff nominated production of The Walls and played Jolene Palmer (inspired by the true-life story of Aileen Wuornos) in Rivendell’s award winning production of Self Defense, or the Death of Some Salesmen -- both productions part of Steppenwolf Theatre Company’s Visiting Theater Initiative.  For Rivendell, Tara has both produced and acted in over thirty productions. She received a Joseph Jefferson award for “Supporting Actress” for her portrayal of Gwenyth in WRENS as part of that production’s Jeff-winning ensemble. She was nominated the following year for “Actress in a Principal Role” for her work in My Simple City.  Screen credits include Steven Soderbergh’s film Contagion, Boss (STARZ) ,Chicago Fire (NBC), Chicago P.D. (NBC), Sense8 (NetFlix), indie feature FOOLS and the CBS/Sony Pictures pilot Doubt .

Jessica Ervin (Penelope) ,one of RTE’s newest members returns to Rivendell where she was last seen in Dry Land (Ester) and also understudies their touring production of Women at War. Other Chicago theatre credits include touring artist with Erasing the Distance, Herculaneum (Blue Goose Theatre Ensemble), Summer in the Parks production of The Wild (Walkabout Theater Company), 12 Ways to Play Festival (The Public House Theatre), and Collaboraction’s final Sketchbook Festival. She can also be seen in the upcoming feature film Princess Cyd. Jessica is a graduate of Ball State University with a B.F.A. in Acting, and is represented by Gray Talent Group.

Margaret Kusterman (Cynthia) has appeared at Next Theatre where she appeared in The Luck of the Irish and Great God Pan. She understudied the role of Patricia in The Herd at Steppenwolf, where she was also in the Ensemble of No Place Like Home. At Seanachai she was part of the Jeff-nominated ensemble of The Big Picture. She was in Tartuffe at Remy Bumppo and Uncle Vanya at Strawdog. After understudying the role of Meg in The Beauty Queen of Leenane at Steppenwolf, she played the role at Northern Stage in Vermont. Margaret has worked with Jackalope, The Gift, Defiant, Livebait, Lifeline and Center Theatre. She holds a Masters Degree in Theatre from Northwestern University.

Josh Odor (Mark) most recently performed in Griffin's Winterset, The Hypocrites' You on the Moors Now, Haven Theater's The Distance and The Time of Your Life with the Artistic Home. Josh has also worked at Steppenwolf, The Goodman, TimeLine, Steep, Teatro Vista, The Inconvenience, The House, The New Colony, Collaboraction, LiveWire, Buffalo Ensemble and as a member of Pine Box.  Josh's television work includes Chicago PD, Chicago Fire, Betrayal and Boss.

Aurora Real de Asua (Lucia) is working with the Rivendell Ensemble for the first time. Past Chicago credits include Rosencrantz and Guildenstern Are Dead (Metropolis), You On the Moors Now (u/s Hypocrites), Twelfth Night (u/s Chicago Shakespeare in the Park), as well as work with the Goodman Theatre and American Myth Project. She recently graduated from Northwestern University.

Hannah Toriumi (Agatha) has performed with such theaters as The Gift, Goodman Theatre, Silk Road Rising, Step Up Productions, and TOTC. She has also made appearances in commercials, film, and television. Hannah is represented by Paonessa Talent, is a graduate of The School at Steppenwolf Class of 2015 and holds a BA in Theatre Performance from North Central College.

Parking and Transportation: Free parking is available in the Senn High School parking lot (located a block and a half from the theatre behind the school off Thorndale Avenue). There is limited paid and free street parking in the area and the theatre is easily accessible via the Clark (#22) or Broadway (#36) bus and is a short walk from the Bryn Mawr Red Line El station.

Among the cast are four RTE Members, including Meighan Gerachis, Rebecca Spence, RTE Artistic Director Tara Mallen and RTE’s newest ensemble member, Jessica Ervin, most recently honored with a Jeff nomination for Best Actress for her work in last season’s production of Dry Land.
The dramaturg is Tanya Palmer, the Goodman’s Director of New Play Development.

**Rivendell fills an important role in the Chicago region as the only Equity theater dedicated to producing artistically challenging and original plays created by and about women.**

The Firebirds Take the Field was commissioned by Ensemble Studio Theater through support from the Alfred P. Sloane Foundation Grant. Founded in 1934 by industrialist Alfred P. Sloan Jr., the Foundation is a not-for-profit grantmaking institution that supports high quality, impartial scientific research; fosters a robust, diverse scientific workforce; strengthens public understanding and engagement with science; and promotes the health of the institutions of scientific endeavor.

Posted by Bonnie Kenaz-Mara at 12:00 PM No comments: