REVIEW: Failure: A Love Story at Oil Lamp Theater in Glenview, On Stage Through September 4, 2022

at Oil Lamp Theater in Glenview

“Cool space!” we noted upon our arrival at the Oil Lamp Theater in Glenview. The front lobby has a nice bar, and complementary cookies are provided for patrons during every performance. Tucked away near the library and the Glenview House Restaurant, (where we had a lovely meal served by a young man with fabulous hair who reminded me of Patrick Swayze), this is the only Professional Theatre in Glenview.

I was not acquainted with Failure: A Love Story, which may have detracted from my enjoyment. The script was kind of hard to follow for those of us unfamiliar with the storyline. Having one actress play the three sisters, and their mother, (Kendal Romero) was confusing. Some of the action, especially of the Snake character on the floor, (yes, there are Pet characters. Weird.) was difficult to see. The staging needs to be considered, as the sightlines were tough to overcome for the Short of Stature. 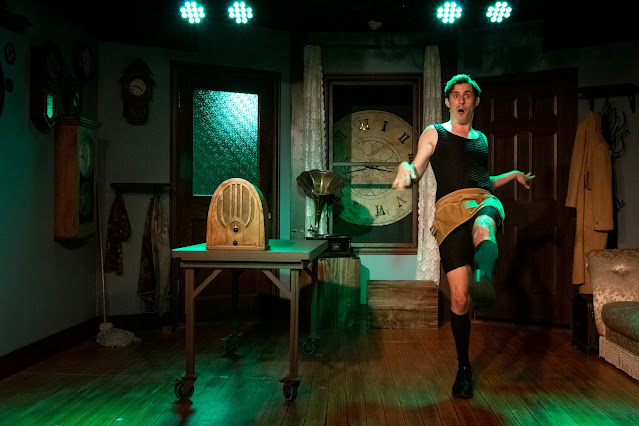 The Fail Family “got rid of their ‘Bottoms”” at Ellis Island when their name was shortened from “Failbotton” to just “Fail.” Owning a clock company, “A ‘Fail Clock’ is a working clock,” provides for the family. (All the clocks on the walls, and the actors mimicking clocks, reminded me of my childhood home because my Mom loved clocks.) When the parents die, the sisters take over the family business downtown.

The cast was very energetic and enthused. I liked the chorus parts played by Jasmine Robertson, Jordan Zelvin, and Philip J. Macaluso. The Chicago storyline was cool, opening with references to the Eastland disaster of 1915 which killed 844 people, including nearly two dozen entire families. The setting was all in Chicago, and the parents perish the day of the worst shipwreck on the Great Lakes. The entire show focuses on loss and death. The Mom loses a baby in 1910 and is never the same. One of the daughters dies accidentally on her wedding day. Another sister tries to swim Lake Michigan from Chicago to Indiana (wouldn’t it be Michigan?) but disappears in the process. (“Have you ever smelled Indiana?” asks one of the characters.)

Failure: A Love Story reminds us how “it is better to have loved and lost than to never have loved at all.” (Thank you, Alfred Lord Tennyson).

Catherine Hellmann teaches teens by day and attends theater by night. She thinks sleeping until noon on Saturday is an accomplishment.

FAILURE: A LOVE STORY
By Philip Dawkins
Directed by Xavier Custodio
Oil Lamp Theater's 10th Anniversary season rolls on with this whimsical romp exploring life and death in the Roaring '20s.
PLOT: The year is 1928 and we meet the Fail sisters: Nelly, Jenny June, and Gerty. Born in that order. The sisters were bubbly, determined, and brittle. Also in that order. Set in the family home and clock shop near the Chicago River, this magical, musical fable follows the Fail sisters’ triumphs and tragedies. As with so many things in life such as blunt objects, disappearances and consumption, the Fail sisters never saw death coming. Happily ever after can’t last forever. But in this upbeat look at life’s ups and downs, we learn you can either be a grump about death, or you can live, love, and sing some catchy songs along the way.
CAST:
Trevor Earley: Mortimer Mortimer
Van Ferro: John N.
Philip J. Macaluso: Chorus Member
Kendal Romero: Gertie, Jenny June, Nelly Fail
Jasmine Robertson: Chorus Member
Jordan Zelvin: Chorus Member
Esther Fishbein: Gertie, Jenny June, Nelly Fail (U/S)
Rae Hamilton-Vargo: John & Chorus (U/S)
Katie Luchtenburg: Chorus Member (U/S)
Brooks Whitlock: Mortimer Mortimer (U/S) 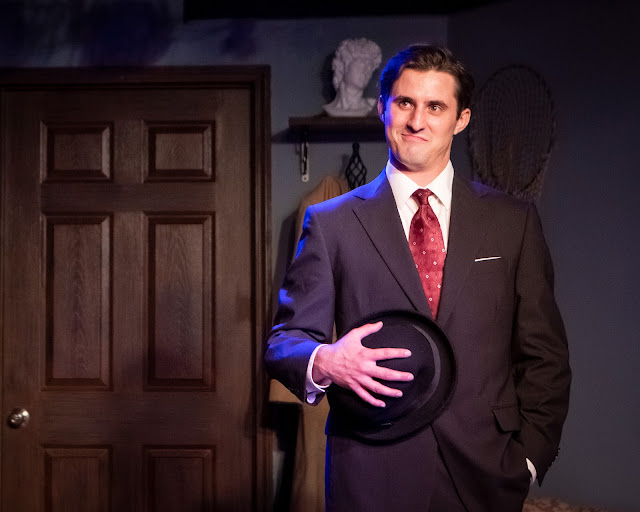 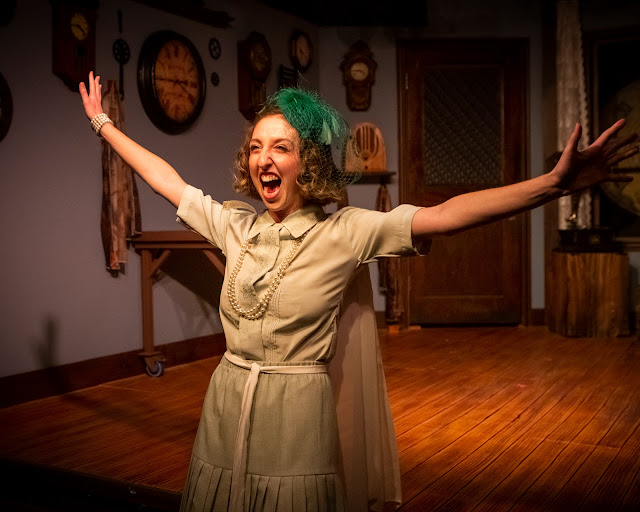 SHOWTIMES:
Thursday, 8pm
Friday, 8pm
Saturday, 3pm & 8pm
Sunday, 3pm
PRICE:
$35 - Previews July 21, 22, 23 (3pm)
$45 - Run July 23 (8pm) - Sept. 4
For tickets and more: https://oillamptheater.org
ABOUT THE DIRECTOR
Xavier M. Custodio is one of the Co-Founders and Artistic Director of Visión Latino Theatre Company. He feels honored to be directing Failure: A Love Story, and getting the opportunity to work with Oil Lamp Theater to bring this fun story to life. Xavier’s directing credits includes: Y Tu Abuela, Where is She?, Baskerville: A Sherklock Holmes Mystery, Stories of Us, Fame, In The Heights, Yellow Eyes, Revolt, and Parachute Man (Assistant Director). He has been in the following productions: The Scarecrow (Minster Dodge), Rent (Benny), Godspell (John the Baptist), Man of La Mancha (Juan), Nine Lives: A Musical Web Series (BFPS Manger), Evita, Ragtime, and The Wiz.
COVID-19 POLICY
Oil Lamp Theater recommends wearing masks when not actively eating or drinking.
Masks will be required for our Saturday 3pm matinees.
About OLT
Mission Statement
Oil Lamp Theater is a professional not-for-profit theater organization that is dedicated to the presentation of traditional theater in a unique, inviting and intimate venue. Its mission is not only to stimulate interest in the performing arts but also to promote a sense of, and provide a service to, the community. 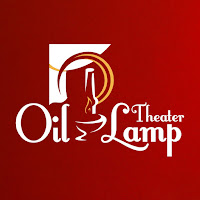 Posted by Bonnie Kenaz-Mara at 4:00 PM No comments: