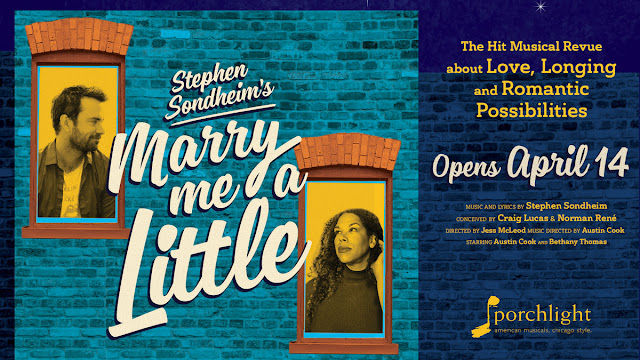 ChiIL Live Shows will be there for opening night, Tuesday, April 18th, so check back soon for our full review.

Porchlight Music Theatre and Artistic Director Michael Weber are proud to announce the final mainstage production it its 2016 – 2017 season Marry Me a Little starring Austin Cook and Bethany Thomas, music and lyrics by Stephen Sondheim and originally conceived by Craig Lucas and Norman René, with direction by Jess McLeod and music direction by Porchlight Artistic Associate Cook. Previews are Friday, April 14 at 8 p.m., Saturday, April 15 at 8 p.m., Sunday, April 16 at 2 p.m. and Monday, April 17 at 7:30 p.m. Opening night is Tuesday, April 18 at 7:30 p.m. The performance schedule is Thursdays at 7:30 p.m., Fridays at 8 p.m., Saturdays at 4 and 8 p.m. and Sundays at 2 p.m. with an added matinee performance Thursday, May 11 at 1:30 p.m.

Two urban singles, each alone in their apartments in the same building, share a Saturday night of sweet fantasies and deep yearning never knowing that they're only a floor away from each other and the end of their lonely dreams. Following in the tradition of Porchlight's hit Sondheim on Sondheim, and re-conceived with special permission given by Stephen Sondheim especially for this production, the rarely seen Marry Me a Little breathes new theatrical life and meaning into a collection of songs that were culled from the final productions of Anyone Can Whistle, Follies, Company, A Funny Thing Happened on the Way to the Forum, A Little Night Music and other Sondheim favorites.

Conceived by original Sweeney Todd cast member Craig Lucas and Norman René, the Off-Broadway premiere of Marry Me a Little debuted in 1981 starring Lucas and Suzanne Henry at the Actors' Playhouse. Marry Me a Little includes such songs as "So Many People," "The Girls of Summer," "All Things Bright and Beautiful," "There Won't Be Trumpets," "Can That Boy Foxtrot," "Bang!," "Your Eyes Are Blue," "Happily Ever After," "It Wasn't Meant to Happen" and "A Moment with You."

The two-person cast of Marry Me a Little includes: Austin Cook as “The Man” and Bethany Thomas  as “The Woman.”

ABOUT AUSTIN COOK, music director and “The Man”
Austin Cook is a Porchlight Music Theatre artistic associate. He made his Porchlight debut in Ain’t Misbehavin’ for which he won the Jeff Award for “Artistic Specialization” and later music directed and co-starred in the award-winning Sondheim by Sondheim where he received the Jeff award for “Music Direction.” The recipient of three Jeff awards, he is currently based in Brooklyn, NY. A native of Kansas City, MO, Cook has been a dedicated musician his entire life. After receiving his bachelor's degrees in piano and vocal performance, Cook toured Europe performing Rachmaninov's Piano Concerto No. 2. In 2008, he came back to the States to join Walt Disney Entertainment as a composer/orchestrator. In 2009, he moved to Chicago to continue his work as a music director, producer  and actor. He is a proud member of AEA and the AFM. As a producer, his most recently produced album The Beast in Me received the 2014 Independent Music Award for Best Roots EP. The album was performed in its entirety on the nationally televised PBS series Sun Studio Sessions. Cook moved to New York in 2016 after being in the orchestra for the pre-Broadway run of War Paint at the Goodman Theatre.

ABOUT BETHANY THOMAS, “The Woman”
Bethany Thomas made her Porchlight debut with Children of Eden in 2002 and has been a recurrent performer at Porchlight Music Theatre’s concert fundraiser Chicago Sings as well as starring as “The Witch” in its Into The Woods. Other Chicago credits include: All Shook Up, Big Fish (Theatre at the Center); South Pacific (Jeff Award-Marriott Theatre); Porgy and Bess (Court Theater); Hairspray (Drury Lane Theatre); Hair (Paramount Theatre); The Tempest (Chicago Shakespeare Theatre) as well as work with The Second City, About Face Theatre, Theo Ubique Cabaret Theatre and American Theater Company. Regional credits include: Little Shop of Horrors (Geva Theatre Center); The Color Purple, Ain’t Misbehavin’ and Ragtime (Milwaukee Repertory Theater). She frequently performs around Chicago at locations including The Hideout, Salonathon and “The Paper Machete” and has appeared on FOX Television’s “Empire.”

ABOUT PORCHLIGHT MUSIC THEATRE
Porchlight Music Theatre, now in its 22nd season, is nationally recognized for developing innovative new works, reimagining classic productions and showcasing musical theatre’s noted veterans and rising stars. Porchlight elevates the genre in Chicago by providing intimate and powerful theatrical experiences for its growing and diverse audiences. With the vision of Artistic Director Michael Weber, Porchlight builds on its role as Chicago’s only Equity not-for-profit company exclusively specializing in music theatre. Porchlight’s rich history includes the staging of more than 60 productions with 15 Chicago premieres and five world premieres. Through Porchlight’s “Off the Porch” new works program, the musicals of the next generation are developed and given a first audience. The School at Porchlight is Chicago’s new center for music theatre training in the areas of performance, writing and appreciation. The company’s many accolades include 17 Black Theatre Alliance nominations and three awards, as well as a total of 126 Joseph Jefferson Award nominations resulting in 39 Jeff Awards including four consecutive Best Production awards for Dreamgirls (2016), Sondheim on Sondheim (2015), Ain’t Misbehavin’ (2014) and A Class Act (2013). 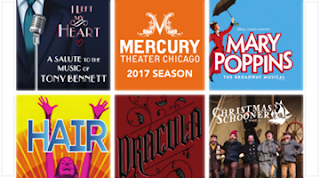