Save the dates for Signal Ensemble Theatre's latest, the Chicago premiere of The Drowning Girls by Beth Graham, Daniela Vlaskalic and Charlie Tomlinson. The show will be directed by Signal Ensemble Member Melanie Keller at Signal Ensemble Theatre, 1802 W. Berenice Ave., April 30 – June 6. Tickets are on sale now. ChiIL Live Shows will be there for opening night, so check back for our full review after May 1. 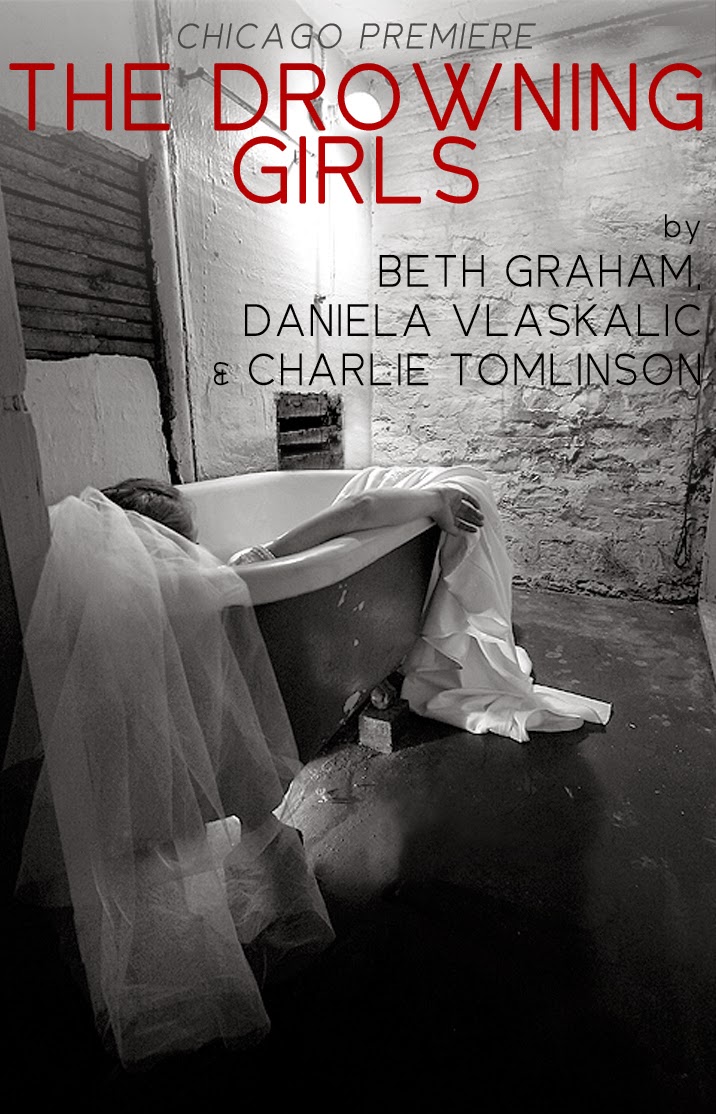 Previews are Thursday, April 30 and Friday, May 1 at 8 p.m. Opening/Press night is Saturday, May 2 at 8 p.m. Regular performances are Thursday – Saturday at 8 p.m. and Sunday at 3 p.m. Ticket prices are $23 for single tickets, $15 for industry/students/seniors/groups and $12 for previews. Tickets may be purchased by calling 773.698.7389 or by visiting www.signalensemble.com.

Bessie, Alice and Margaret have two things in common: they are married to George Joseph Smith, and they are dead.  Surfacing from the bathtubs they were drowned in, the three breathless brides gather evidence against their womanizing, murderous husband by reliving the shocking events leading up to their deaths.  Reflecting on the misconceptions of love, married life, and the not-so-happily ever after, The Drowning Girls is both a breathtaking fantasia and a social critique, full of rich images, a myriad of characters, and lyrical language.

ABOUT THE DIRECTOR
Melanie Keller is a member of Signal Ensemble Theatre, where her first appearance with them was as Beatrice in their Much Ado About Nothing. She was the winner of a Jeff Award for Best Principal Actress for her work in East of Berlin and The Russian Play, and was nominated for a Jeff Citation for Best Supporting Actress for her performance in The Weir. She also appeared in Signal's world-premiere production of Landslide, and played Kate Hardcastle in She Stoops to Conquer. She was the Chicago Fellow at the Stratford Shakespeare Festival of Canada and is also an artistic associate of First Folio Theatre.  Melanie’s credits include roles at Northlight Theatre, Michigan Shakespeare Festival, Next Theatre, Chicago Shakespeare Theater, Metropolis Performing Arts Centre, BackStage Theatre Company, Strawdog Theater Company, Goodman Theatre, Seanachai Theatre Company (now Irish Theatre of Chicago), Breadline Theatre, Shaw Chicago Theater Company, and Lifeline Theatre, among others. Melanie trained at the Birmingham Conservatory of Stratford, the Royal Academy of Dramatic Art in London, and is a graduate of Illinois Wesleyan University.

ABOUT THE CREATORS
Beth Graham is a co-creator of The Drowning Girls, which premiered at Alberta Theatre Projects’ 2008 PlayRites festival, went on to tour nationally, was published by Playwrights Canada Press, was nominated for the Carol Bolt Award, and received the Gwen Pharis Ringwood Award for Drama. Other co-creations include: Comrades,Mules and Victor and Victoria’s Terrifying Tale of Terrible Things. She is a graduate of the University of Alberta’s BFA acting program and is currently a member of The Playwright’s Forum at The Citadel Theatre in Edmonton.

Daniela Vlaskalic is an actor and playwright who has performed in many theatres across Canada. Daniela began collaborating with Beth Graham and Charlie Tomlinson in 1999 with The Drowning Girls. In 2008, a new full-length version of The Drowning Girls premiered at Alberta Theatre Projects as part of the Enbridge PlayRites Festival and received four Betty Awards (Calgary). Daniela continued collaborating with Beth on several plays including; Comrades, nominated for four Elizabeth Sterling Haynes Awards (Edmonton), The Last Train, which won the Alberta Playwrights Network Write-to-Win competition in 2003 and premiered at Shadow Theatre in their 2004/2005 season. Their most recent play Mules premiered at the 2006 Edmonton Fringe Festival.
Charlie Tomlinson is a teacher, director and actor who lives in St John’s, Newfoundland. He is the former artistic director of c2c theatre. He has worked at theatres from Newfoundland to the Yukon and has taught in Ontario, Alberta, and Newfoundland.