Tis the season for fabulous films and music and Music Box Theatre makes our ChiILpicks List as one of the city's best.   We adore the vintage decor, and their excellent lineup.   The Music Box is brimming with fam friendly sing alongs, Oscar winning classics, and new release international, indie and art films.

Music Box & The Stage
In 2012 we caught a number of The National Theatre of Great Britain's excellent live theatre productions, filmed and shown around the world, like Frankenstein staring dual Sherlocks (Benedict Cumberbatch from the BBC revival and Jonny Lee Miller from Elementary).   Check out our review here.  And more of our past coverage here.

Live theatre on film is an acquired taste, and many film critics dislike the genre, but theatre people are flocking to the shows.   Folks dress up for the films, more like a night out at a Broadway in Chicago show, and applaud like a live performance.   We think they're a hoot, and relish the opportunity to see world renowned stars on stage without a pricy flight across the ocean!   We hit up press previews of most of Music Box's National Theatre offerings.   The Last of The Haussmans, and Timon of Athens which we had just seen live at Chicago Shakespeare, were some of our favs pf 2012.   Keep an eye out for more in 2013.   Highly recommended. 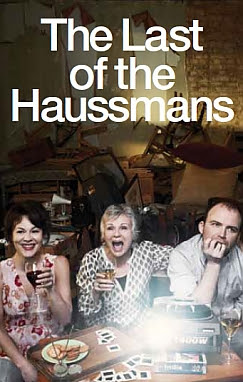 The Last of the Haussmans
A FILM BY HOWARD DAVIES STARRING JULIE WALTERS, RORY KINNEAR, AND HELEN MCCRORY

Julie Walters plays Judy Haussman with Rory Kinnear and Helen McCrory as her children in this eagerly-anticipated new play: a funny, touching and sometimes savage portrait of a family that’s losing its grip.
Anarchic, feisty but growing old, high society drop-out Judy Haussman remains in spirit with the Ashrams of the 1960s while holding court in her dilapidated Art Deco house on the Devon coast. After an operation, she’s joined by wayward offspring Nick and Libby, sharp-eyed granddaughter Summer, local doctor Peter, and Daniel, a troubled teenager who makes use of the family’s crumbling swimming pool. Together they share a few sweltering months in this chaotic world of all-day drinking, infatuations, long-held resentments, free love and failure.
One of Britain’s best-loved and most versatile actors, Julie Walters has wonBAFTA, Golden Globe and Olivier Awards for her work. Her screen credits range from Educating Rita to celebrated work with Victoria Wood, from lead roles in the movies of Mamma Mia! and Harry Potter to portraying Mo Mowlam for Channel 4.
Rory Kinnear recently won the Evening Standard Award for Best Actor for his performance as Hamlet at the National Theatre. Helen McCrory’s acclaimed work includes the films The Queen and, recently, Hugo.

Check out more of ChiIL Live Shows past Music Box coverage here.   We'll be bringing you even more film news, original reviews, and sneak peeks in the coming year. 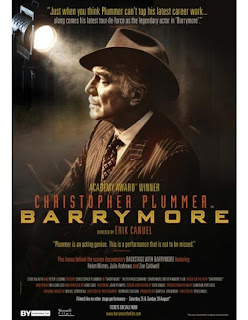 We had the great pleasure of catching a press preview and were blown away by Christopher Plummer's Barrymore.   We've been giving you the heads up on this one on our FB and Twitter feeds since the first week of December.   Check back January 10th to see if rumors of Oscar nominations for this film come true and absolutely catch it if you can. 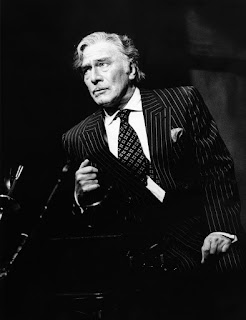 BARRYMORE, a captured-live stage production, stars Academy Award winner Christopher Plummer as American acting legend John Barrymore. In a career defining performance, Plummer (as Barrymore) reckons with the ravages of his life of excess while rehearsing a revival of his 1920 Broadway triumph in Richard III.

BARRYMORE, based on the 1997 Broadway production, is set in 1942, and follows acclaimed American actor John Barrymore, a member of one of Hollywood’s most well-known theatrical dynasties, as he rehearses the Shakespearean triumph that made him a household name, Richard III. The film finds Barrymore in his faded glory reckoning with the ravages of his life of excess, only months before his premature death. The film is directed and written by Érik Canuel, based on the play by William Luce.

Barrymore is played by Academy Award winner and master thespian Christopher Plummer, reprising his 1997 Tony Award-winning role. His nuanced performance has earned him rave reviews and, for a film that didn’t find a distributor after its World Premiere at the 2011 Toronto International Film Festival, talk of a third Academy Award nomination, and more importantly, a nomination for Best Actor after three nominations and one win for Best Supporting Actor. Could this staged one-man play, where Plummer chews the scenery for the entirety of its running time, get him that nomination?

“I’m all but convinced he has the Oscar in the bag,” Hollywood Elsewhere critic Jeff Wells exclaimed after seeing it.

David Edelstein of New York Magazine says, “God, I love Plummer’s performance — the twiddling fingers, the tipsy sway of the head, the reverberating roar, as well as the pathos of a man who can’t stop acting long enough to hear the cry of his own soul.”

There is a precedent for plays on film getting Academy love.  A 1965 filmed version of Britain’s National Theatre presentation of Othello earned acting nominations for its cast. In 1975, James Whitmore was nominated in the Best Actor category for the production of his one-man show Give ’Em Hell, Harry!

The December 27 showing includes a ”making of” documentary, Backstage with Barrymore, featuring Helen Mirren, Julie Andrews, and Zoe Caldwell.  Total running time of the film (84m) plus the documentary (45m) is 129 minutes.

Barrymore
Starring Christopher Plummer, directed and written by Érik Canuel, based on the play by William Luce. In English, 129 minutes. 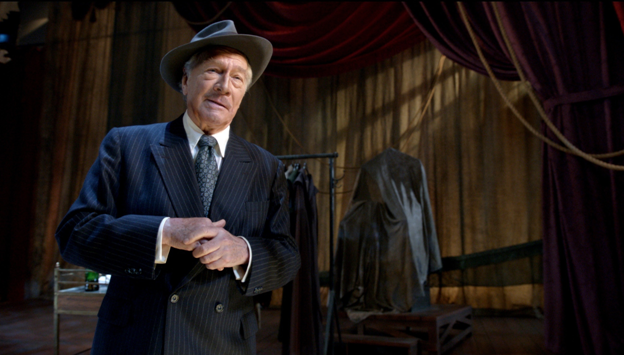