OPENING: THE ORIGINAL LONDON PRODUCTION of THE WOMAN IN BLACK at 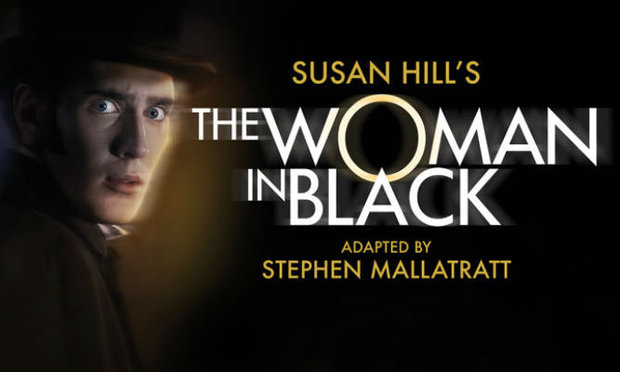 I'll be out for the press opening, November 18th, so check back soon for my full review. Here at ChiIL Live Shows, we enjoy a touch of the macabre, so we're eager to catch The Woman in Black.

Over eight million people have lived to tell the tale of one of the most successful – and terrifying - theatre events ever staged, and it’s coming to shock audiences in Chicago this fall. The Woman in Black – London’s long-running West End play -  will open at Chicago’s Royal George Theatre in November with all the stage thrills that have led audiences in London to shriek in fear for 30 years.

Susan Hill’s Gothic ghost story, adapted for the stage by Stephen Mallatratt, is set in an isolated windswept mansion with tragic secrets hidden behind its shuttered windows. There, a young lawyer encounters horrific visions in the house set amidst the eerie marshes and howling winds of England’s forbidding Northeast Coast. With just two actors, The Woman in Black offers audiences an evening of unremitting drama and sheer theatricality as they are transported into a chilling and ghostly world.

London’s The Independent said of it, “The atmosphere is so charged-up that on more than one occasion the entire audience screamed in terror.” The Daily Mail called it “A nerve-shredding experience.”

Reviewing the West End production this past January, the London newspaper The Daily Express said, “As the tale unfolds, it tightens its grip on the spectator like a medieval instrument of torture… It is all staged impeccably with amazing sound effects and shocks that make you jump out of your seat. But it is the simplicity that impresses. It is profoundly effective, and it will scare the living daylights out of you.”

The Guardian’s Mark Lawson said, “the great pleasure of the production remains the way in which Mallatratt and the director Robin Herford (who has been in charge of all the play’s incarnations) utilize the fears and imagination of the audience, so that, for example, a few glances and hand gestures create out of nothing a dog who is as convincing as animatronics, while a few puffs of stage smoke or a flap of fabric conjure up geographical and physical presences.”

For the Chicago production, director Robin Herford will recreate his original staging for the first time in the U.S., with a Chicago-based cast. This American premiere of the Original London West End production, presented by PW Productions and Pemberley Productions, will begin previews November 15th , with a Press Opening on November 18th at the Royal George Theatre, 1641 N. Halsted St., Chicago. 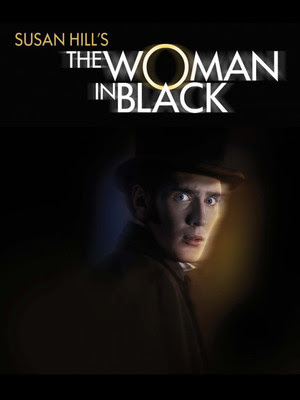 The History of THE WOMAN IN BLACK

Susan Hill’s novel, THE WOMAN IN BLACK was originally published in 1983 and has thrilled and spooked millions of readers ever since.  Robin Heford commissioned Stephen Mallatratt to adapt the novel for the stage in 1987 and it was produced as a Christmas show at the Stephen Joseph Theatre in Scarborough, U.K. After months of sold out performances, the play transferred to London’s West End in January 1989.

The classic chiller was released as a major motion picture starring Daniel Radcliffe in 2012, and soon became the highest grossing British horror film in 20 years.

The Chicago production of THE WOMAN IN BLACK will star Bradley Armacost as Arthur Kipps and Adam Wesley Brown as The Actor.

Bradley Armacost (Arthur Kipps)
Bradley has worked extensively on stage, in film & television, and in voice-over throughout the country.

Based in Chicago, he has received numerous Joseph Jefferson Awards and nominations for his stage work. Select credits include Oedipus Complex, The Zoo Story, The Trip To Bountiful, A Touch of the Poet and Chicago Boys at Goodman Theatre; Playboy of the Western World, Maria Arndt, The Seafarer, and Faith Healer at Steppenwolf Theatre Company; The Merchant of Venice, The Comedy of Errors, Timon of Athens, Antony & Cleopatra, Two Gentlemen of Verona, Elizabeth Rex, and The Madness of King George at Chicago Shakespeare Theatre; and You Can't Take It With You and A Life (with the late John Mahoney) at Northlight Theatre. Earlier this season he appeared in Translations at Washington, D.C.'s Studio Theatre.

Bradley is an Artistic Associate at Provision Theatre Company (Shadowlands, C. S. Lewis: Onstage, Tuesdays With Morrie) and Irish Theatre of Chicago (The Weir, Moon for the Misbegotten, The Seafarer, Hughie, Shining City).

Film credits include Patriot, Warren, The Company, Barbershop 2, Repetition, and Eight Men Out.

Bradley has made numerous appearances as narrator with the Chicago Symphony Orchestra in the Beyond the Score series.

Much of his early career was involved with Alan Ayckbourn and the Stephen Joseph Theatre in Scarborough. Joining the company in 1976 as an actor, he was appointed Associate Director in 1979 and was Artistic Director from 1986 to 1988. Robin has appeared in the original production of more Ayckbourn plays than any other actor, from Ten Times Table in 1977 to Henceforward… in 1987 and including the monster 16-play two-hander Intimate Exchanges. He came to London with Season’s Greetings and Suburban Strains (Roundhouse), Intimate Exchanges (Ambassadors) and Henceforward… (Vaudeville).

While Artistic Director at Scarborough, he commissioned and directed Stephen Mallatratt’s phenomenally successful adaptation of The Woman in Black, which has been running in the West End for almost 30 years and has completed 12 national tours. He always personally directs every recast and has also directed productions of the play abroad: in Tokyo (in Japanese!), India, Singapore, Hong Kong, Australia, New Zealand and soon, America.

Robin’s other London productions include The Glory of The Garden, (Duke of Yorks), Rough Justice (Apollo), Joking Apart and The Importance of Being Earnest (Greenwich) and The Secret of Sherlock Holmes (Duchess)

PW PRODUCTIONS (Producers)
PW Productions is responsible for producing some of the most successful productions in British theatre over the past 30 years.
As well as being prolific producers, they have acted as General Managers, Bookkeepers and Accountants to more than 500 productions in London, throughout the UK and around the world.

As well as producing the multi-award-winning J B Priestley’s An Inspector Calls in the West End, on tour in the UK and internationally, in 1989 they brought Stephen Mallatratt’s The Woman in Black to the West End which celebrates its 30th year in the West End this year, and tours the UK and the world.

Other productions and co-productions: Edmund Kean with Ben Kingsley; Rowan Atkinson at the Atkinson on Broadway; Julian Glover’s Beowulf in New York and the UK; A Betrothal with Ben Kingsley and Geraldine James; Dickens’ Women with Miriam Margoyles; Kings with Alan Howard; Dylan Thomas: Return Journey, directed by Anthony Hopkins and co-produced with Eric Clapton; The Father with Edward Fox and Stephanie Beacham; Boyband at the Gielgud; Amadeus at the Old Vic and on Broadway with David Suchet and Michael Sheen and Lenny with Eddie Izzard at the Queen’s, both directed by Sir Peter Hall; Old Wicked Songs with Bob Hoskins; The Madness Of George Dubya; Bombshells starring Caroline O’Connor, both at The Arts Theatre; What The Butler Saw at the Criterion Theatre; Honour with Dame Diana Rigg at the Wyndham’s Theatre; Aspects Of Love with David Essex; Sign Of The Times with Stephen Tompkinson; Peter Pan in Kensington Gardens and at the O2; The Railway Children at Waterloo Station; Broken Glass with Sir Antony Sher and Tara Fitzgerald at the Vaudeville Theatre; Maurice’s Jubilee at The Pleasance; Spot’s Birthday Party; This Is Ceilidh in Edinburgh and London; The Nightmares Of Carlos Fuentes at Arcola, directed by Nicolas Kent; Adrian Mole The Musical at Leicester Curve; This Is Living at Trafalgar Studios; Vault Festival; Chinglish at Park Theatre.

PW Productions has a number of new projects in development and continues its commitment in creating exceptional theatre.

Pemberley Productions (Producers) is a company founded and run by Andrew D. Hamingson and Tim Smith. They are dedicated to bringing European drama to North America and North American drama to Europe. Next season, as well as co-producing the US tour of Private Peaceful, Pemberley is producing US tours of PW Productions’ tour of the National Theatre of Great Britain’s production of An Inspector Calls directed by Stephen Daldry and the first US tour of the long-running West-End production of Susan Hill’s The Woman in Black, directed by Robin Herford. Previous projects include a US national tour of the Royal Shakespeare Company / Filter Theatre production of Twelfth Night, a European tour of The Public Theater’s Apple Family Plays and an Irish Tour of the American Players Theatre’s production of James DeVita’s In Acting Shakespeare.  Pemberley also co-produced the US tour of Ensemble Basiani from the Republic of Georgia in 2016 and general managed the US tour of Druid Theatre’s The Beauty Queen of Leenane. This past season Pemberley Productions is producing the second US national tour of Sancho by and with Paterson Joseph, and have general managed the national tour of Theatre De La Ville’s State of Siege and the NY premiere of Some Old Black Man at 59E59 Theatres.  Follow Pemberley Productions on Facebook: https://www.facebook.com/PemberleyProductions/ 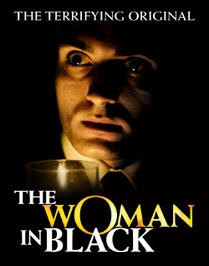 Performances of THE WOMAN IN BLACK are as follows: Wednesdays, Thursdays, Fridays & Saturdays at 7:30pm; Sundays at 7:00. Saturdays and Sundays at 2:30pm.  Tickets are $49 to $69. To purchase tickets, please visit www.ticketmaster.com or the Box Office at 312.988.9000. For more information, visit www.theroyalgeorgetheatre.com.
Posted by Bonnie Kenaz-Mara at 5:25 PM No comments: