Chi, IL Live Shows On Our Radar
17+
Join Us For a 3 Night Ska Bonanza

Last year I had 1 night press/photo credentials. We had so much fun that this year we sprung for two 3-day tickets. Can't wait to catch them live again.

Check out all my Slackfest 2018 live show shots of The Slackers here then come on out this week and catch them live!
(Sunday, December 2, 2018: 2nd Annual Slackfest)

The Circle City Demons
(direct support for The Slackers: Slackfest 2018)

2019 Three Nights with The Slackers with Three different sets…

THE SLACKERS
The Slackers have spreading their gospel of “Jamaican Rock N Roll” for 21 years now. While they have been influenced, and even personally taught by Jamaican ska/reggae originators, like the Skatalites and the Upsetters (Original backing band for the Wailers) they play it with a decidedly American accent. Basically, this band is equally appreciative of old blues, country, 60s soul, rock, and Rnb as it is of reggae, rocksteady, dub, and Ska. It is as if the Rolling Stones or the Yardbirds had grown up on Bob Marley as well as Muddy Waters.

Smashing the stereotypes of “ska” as happy, uptempo, and shallow music, the Slackers play with an aggressive edge and their songs veer in themes from the personal to the political. Back in 1996, the NY Times declared the Slackers to be part of “the sound of New York”, a mantle they haven’t given up since. Ten years later, Alternative Nation stated that their music is “protest music made for dim, sweaty basements. 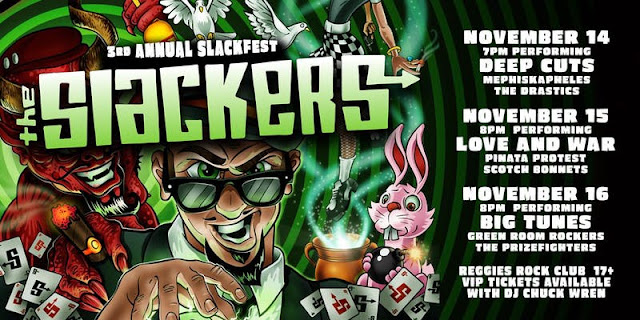 Posted by Bonnie Kenaz-Mara at 3:36 PM No comments: