There's power in beginnings and it's a thrill to see a staging of the first play ever written by Nobel Prize winner, Harold Pinter. The Room is disturbing, edgy and far more about "how do you feel" than "what does it mean". A Red Orchid's exceptional production makes this a full sensory experience, from the opening scene with aromas and sounds of bacon and eggs actually cooking, to the closing scene of a brutal, inexplicable beating. The sounds of clanging pipes, slamming doors, creaking floorboards, electrical shorts and thumping potatoes are as key as the dialogue. I had read The Room back in college as part of my theatre degree, but I'd never seen it performed, and what a difference that makes in the piece. 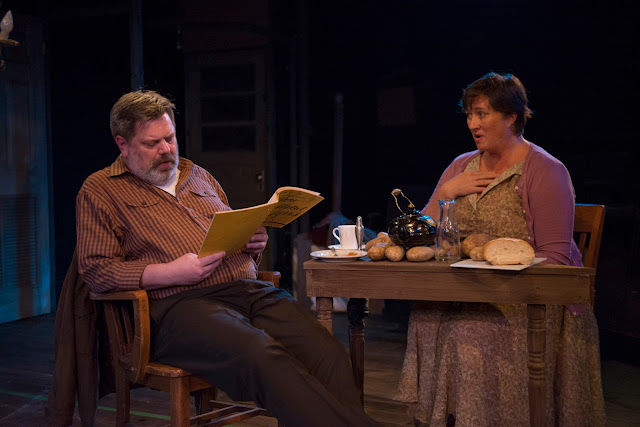 This is an ambitious season opener for A Red Orchid, and director DADO does an admirable job of bringing this unsettling, psychologically tense "comedy of menace" to life on stage. We've seen many of the productions she's directed over the years, and she never ceases to impress.

Light and lack thereof effectively evoked anxiety, and talk of the world beyond the room's walls being frigid and dangerous outside and dank and dripping above and below made the room a claustrophobic but cozy refuge. The angular, sparse set is perfect for this production and the choice to match the curtains to Rose's housedress was brilliant. She not only couldn't seem to leave the room, but the room really became Rose personified. What's left unsaid and unaddressed is as strong as the disjointed dialogue and strange relationships. The timing and rapport of the entire cast was stellar. Highly recommended. 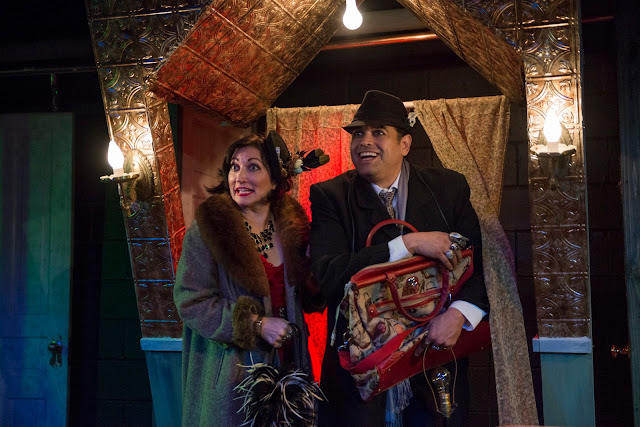 “Though I have seen and read many, The Room is my very first Pinter as an actor,” says Artistic Director Kirsten Fitzgerald. “I find his plays to be something of a Rorschach; everyone perceives something a bit different depending on the day and what they bring in. Today, as I consider The Room and the character of Rose in particular, I wonder what causes a person to retreat and how this willful isolation or chosen ignorance breeds territorialism and xenophobia. I wonder these same things when considering the world.”

By turns terrifying, moving and wildly funny, The Room is Pinter’s very first play. Rose prefers to stay in, safe from the hostile world outside, but her seemingly cozy sanctuary is continually being invaded. With visits from the landlord, a couple in search of their own space, a stranger and the return of her husband, it becomes increasingly unclear whether the menace comes from within or without.

Flashpasses and Memberships may be purchased from the Box Office at 1531 N. Wells Street, Monday through Friday from 12 pm to 5:00 pm. Subscriptions may also be purchased by telephone during office hours by dialing (312) 943-8722, or online at www.aredorchidtheatre.org. Individual tickets will go on sale at a later date. 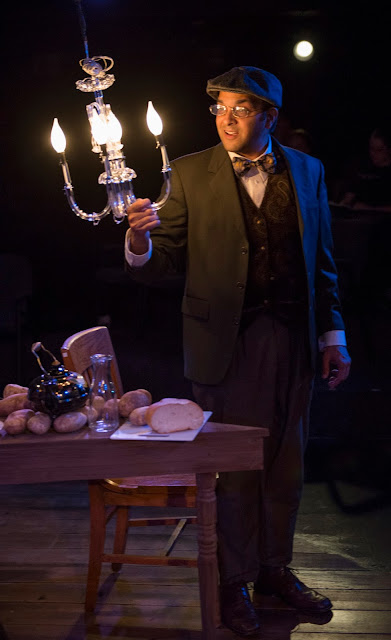 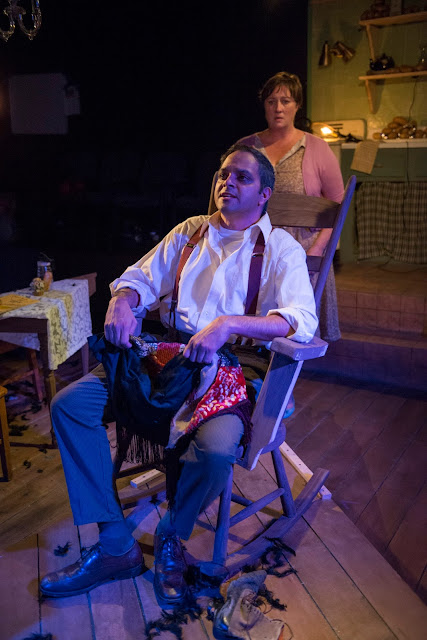 About The Artists
Dado (Director) directed A Red Orchid’s Jeff nominated production of Tennessee William’s The Mutilated last season. Previous shows at A Red Orchid include Red Handed Otter, Strandline (Actor), Simpatico, Megacosm and The Hothouse, among others. In 2015, Dado directed the Incubator project of Harold Pinter's Celebration (infused with the music of Mauricio Kagel) for A Red Orchid, which enjoyed an extended run at Kamehachi. She also directed As You Like It at UIC and Suburbia at St Joseph (where she also teaches Intro to Performance). She also staged an experimental opera at the Art Expo 2015 called Cake Mix, originally composed by Mikey Moran (Red Handed Otter) and based on the contents of a box of Pillsbury cake mix. She recently took her MFA from the University of Chicago in visual art. She lives in Whiting, Indiana with Stella and Booker.

Jo Jo Brown (Riley) is making their debut at A Red Orchid Theatre. Past credits include Passing Strange at UIC’s School of Theatre and Music, A Midsummer Night’s Dream at Two Pence Theater, and The People’s Temple at American Theater Company.

Dano Duran (Mr. Sands) is debuting with A Red Orchid Theatre for the first time. Dano also shoots as many films/TV/commercials as he's allowed to. When not acting Dano is a broker with The North Clybourn Group.

Kirsten Fitzgerald (Rose) has been a member of the Artistic Ensemble at A Red Orchid since 2001. Her performances here at home include three world premieres by Brett Neveu; Pilgrim’s Progress, Weapon of Mass Impact and Four Murders. Other AROT performances include Mud Blue Sky, The Butcher of Baraboo, The New Electric Ballroom, Abigail's Party, The Sea Horse [Jeff Award], Pumpgirl, Mr. Bundy, The Killer and more. Other Chicago credits include Mary Page Marlowe, The Qualms, Clybourne Park, The Elephant Man, and A Streetcar Named Desire (Steppenwolf Theatre); Appropriate (Victory Gardens), and work with Defiant Theatre, Circle Theatre, Next, Remy Bumppo, Chicago Shakespeare Theatre, The Goodman, Shattered Globe, Famous Door, Plasticene and the Utah Shakespeare Festival among others. You can see her on the small screen now in The Exorcist (FOX) and other TV credits include Sirens (USA), Chicago Fire (NBC), ER (NBC) and Underemployed (MTV).

Mierka Girten (Mrs. Sands) is an ensemble member at A Red Orchid, where she has been seen in over thirteen productions, including The Mutilated, Simpatico, Red Handed Otter, Mud Blue Sky and Abigail’s Party among others. This past summer Mierka played Maria Callas in Master Class at The Human Race Theatre Company in Dayton Ohio. Additionally, she has worked with The Hypocrites, Rivendell Theatre, Porchlight Music Theatre, Cobalt Ensemble, Apple Tree, Provision, Strawdog, Circle Theatre, American Blues, Mary-Arrchie, Live Bait, Roadworks, Steppenwolf and The Goodman. She played Esther in Mistakes Were Made both here at A Red Orchid and in the Off-Broadway Barrow Street Theatre production with friend Mike Shannon. Her voice can be heard on national broadcast and web commercials.

Anish Jethmalani (Mr. Kidd) makes his A Red Orchid debut with The Room. His stage credits include Wit and ten seasons of A Christmas Carol (Goodman Theatre); Water by the Spoonful, Titus Andronicus, Mary Stuart, The Invention of Love and Life’s a Dream (Court Theatre); Romeo & Juliet (Chicago Shakespeare Theater); Homeland Security (Victory Gardens Theater); Inana, Blood and Gifts (TimeLine Theatre Company); Bengal Tiger at the Baghdad Zoo, Around the World in 80 Days and Sita Ram (Lookingglass Theatre Company); The Caretaker, To the Green Fields Beyond (Writers’ Theatre); Citizens of the World (Steppenwolf Theatre Company); Omnium Gatherum, Return to Haifa and The Millionairess (Next Theatre Company); Twelfth Night (First Folio Theatre); The Man Who Murdered Sherlock Holmes (Mercury Theatre); Indian Ink, The Sign of the Four (Apple Tree Theatre); Merchant of Venice (Silk Road Rising) and The Age of Cynicism (Chicago Dramatists). Regionally, he appeared in Henry VIII and Much Ado About Nothing at the Oregon Shakespeare Festival. His film and television credits include APB, Boss, Leverage, Early Edition,and Batman vs. Superman: Dawn of Justice.

H.B. Ward (Bert) has worked with A Red Orchid Theatre once before, in The Butcher of Baraboo. He has acted with many Chicago companies including Curious Theatre Branch, Prop Thtr, Collaboraction, DOG – a Theater Company, The Magpies, Teatro Vista, WNEP, Theater Oobleck, Tympanic Theatre,16th Street Theater, Wildclaw Theatre, Trap Door Theatre, Next Theatre, Rivendell Theatre, The Side Project, Jackalope Theatre, American Blues Theater, Haven Theatre and, most recently, with Timeline Theatre in Chimerica. He has also acted in television, commercials, and films, including Stephen Cone’s In Memoriam. He has understudied at Victory Gardens Theater, Goodman Theatre and Steppenwolf Theater. He is represented by Paonessa Talent Agency. 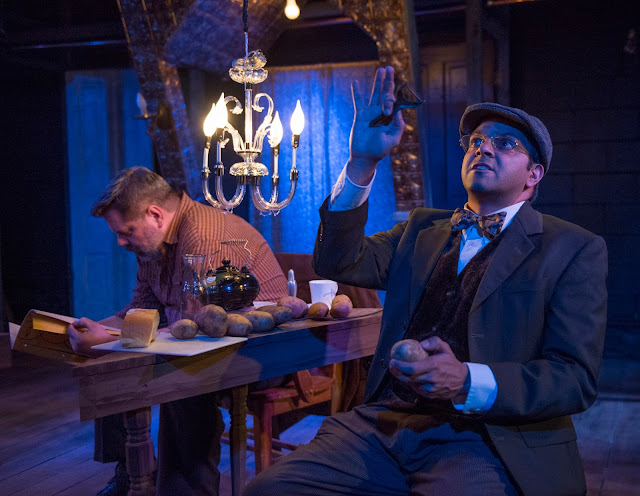 
About A Red Orchid
A Red Orchid Theatre has served as an artistic focal point in the heart of the Old Town community of Chicago since 1993 and was honored this year with a 2016 MacArthur Award for Creative and Effective Institutions. Over the past 23 years, its Resident Ensemble has welcomed into its fold an impressive array of award winning actors, playwrights and theatre artists with the firm belief that live theatre is the greatest sustenance for the human spirit. A Red Orchid is well known and highly acclaimed for its fearless approach to performance and design in the service of unflinchingly intimate stories. In addition to its professional season, the company also produces an annual OrKids (youth) project and hosts The Incubator (providing artists with space and time to explore new work, new forms and new artistic collaborations).