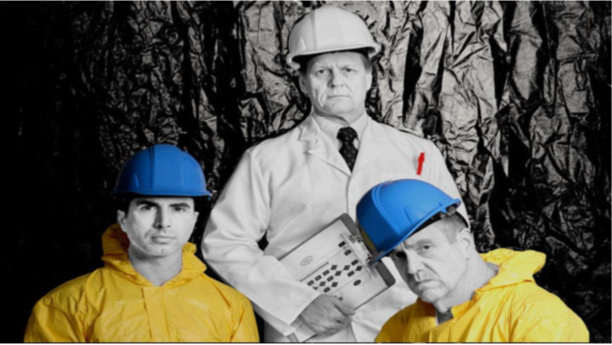 Redtwist Theatre announces an upcoming production of a bizarre dark comedy BELOW THE BELT, running May 17 through June 16. This Off-Broadway hit has been compared to NBC’s The Office as if written by Samuel Beckett and was named “Best American Play of 1996” by the Wall Street Journal. Since its debut it has found especially high popularity in Europe, with over 40 productions in Germany alone.

BELOW THE BELT takes place within the guts of an industrial compound sitting far off in an unknown location. Three men, a power-obsessed boss (played by David McNulty), an emotional middle manager (played by Michael Lomenick) and an eager newcomer (played by John Hundrieser) are isolated from their wives and the other unseen people occupying the factory. They must form a bond out of necessity, while battling sabotage, one-upmanship, and secret alliances among each other. But their need to compete is as strong as their need to connect. The play is about trust, betrayal, and the deep existential pettiness of people attempting to co-exist. Someone always wins and someone always retreats or loses.

Richard Dresser (Playwright) plays have been produced in New York, regional theater, and Europe. They include Rounding Third, which started in Chicago, appeared off-Broadway and has had hundreds of productions and BELOW THE BELT premiered at Actors Theatre of Louisville, moved Off-Broadway, then was made into the film “Human Error” which premiered at Sundance.

About Redtwist Theatre
Redtwist is located at 1044 W. Bryn Mawr – 2 blocks West of Lake Shore Drive & 2 blocks East of the Red Line station. Valet parking for Redtwist is available across the street in front of Francesca’s – Dining is not required.

Posted by Bonnie Kenaz-Mara at 9:38 AM No comments: