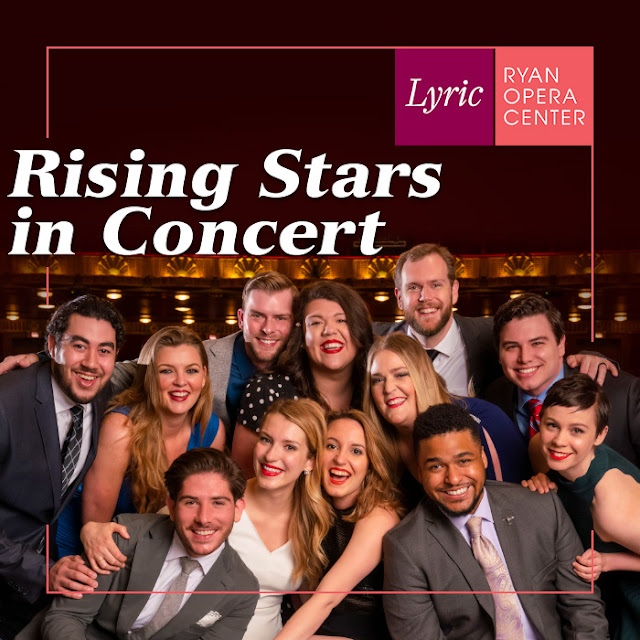 The weather outside was frightful (about 5 degrees, ok, so it is finally winter in January in Chicago), but the atmosphere at the Lyric Opera on Sunday afternoon was delightful. The “Rising Stars in Concert” concert is an impressive “Thank you!” to the donors of the Lyric.

The 2019-20 Ensemble of The Patrick G. and Shirley W. Ryan Opera Center is a very talented group of performers. Selected from over 400 auditions, the elite group consists of 11 singers and one pianist. According to their website, the program “prepares emerging singers and apprentice coaches for careers in opera by providing unique, comprehensive training.” Since 1974, the Ryan Opera Center has been recognized as one of the premier training grounds in the world for emerging talent. Young singers are able to study with powerhouse talents, like Renee Fleming, and perform supporting roles at the Lyric in actual, full-scale productions. What a gift for an aspiring star!

The singers study foreign languages in their apprenticeship so they are able to sing in French, German, and Italian as well as English. The program on Sunday included arias by Berlioz, Gounod, Richard Strauss, Rossini, Donizetti, as well as Victor Herbert and Ralph Vaughan Williams. So, check all four boxes on languages!

There were dramatic pieces, like Lauren Decker (in her awesome red shoes!) singing Verdi in her rich contralto. She gave me goosebumps when she sang the words “Be silent,”  in her very low, deep voice. Mario Rojas sang a lovely romantic piece from Gounod’s Romeo et Juliette in his gorgeous tenor voice. I would have climbed down from my balcony to join him!

Emily Pogorelc was a standout in her princess white gown singing Bellini’s aria from Act Two of La sonnambula. Her voice with its stunning trills and arpeggios was the cream in my coffee (which sounds like Cole Porter, but it’s Ruth Etting, because I looked it up...thanks, Google!)

There were comical pieces as well. My favorite was a duet by Bass Anthony Reed and Bass-Baitone David Wiegel by Rossini from Il turco in Italia where two men talk about selling a wife. The one gent determines if he can’t buy the other guy’s wife, he will abduct her! My favorite line was: “When marriage isn’t working, the husband becomes a salesman.” The men intend to duke it out, so they stretch and prepare physically with one of them falling comically as he attempts the splits. The other hurts his back while warming up, so both end up lame at the conclusion.

After intermission, there was a piano quartet playing Gabriel Faure’s Piano Quartet No. 1, Op. 15, Fourth Movement with pianist Madeline Slettedahl. She says in the program: “It’s been a privilege to perform frequently with my talented singing colleagues both here in Chicago and abroad, developing both musically and interpersonally in a field that has so much to say about the human experience.”

A video played with departing singers being interviewed about their experiences with the Ryan Opera Center. One singer stated that these four years immersed her in everything and allowed her to “be prepared for anything” while growing as an artist and as a person.

Another singer grew up attending the Lyric Opera since high school, so being in the program was like “coming home.”

The show ended with Victor Herbert’s finale from Naughty Marietta. When the singers burst into: “Ah! Sweet mystery of life, at last I found you!” there were chuckles in the audience, probably recalling Mel Brooks’ amusing take on this song in Young Frankenstein. “‘For ‘tis love, and love alone, the world is seeking!”

The world also needs more glorious music, and the Lyric Opera provided us with this balm on a dreary, frosty day.

Catherine Hellmann has great stories from a year doing singing telegrams, which was not as artistic as the Lyric, but pretty darn enteratining.

The radio broadcast of Rising Stars in Concert is generously sponsored by the Donna Van Eekeren Foundation.

Posted by Bonnie Kenaz-Mara at 11:20 AM No comments: