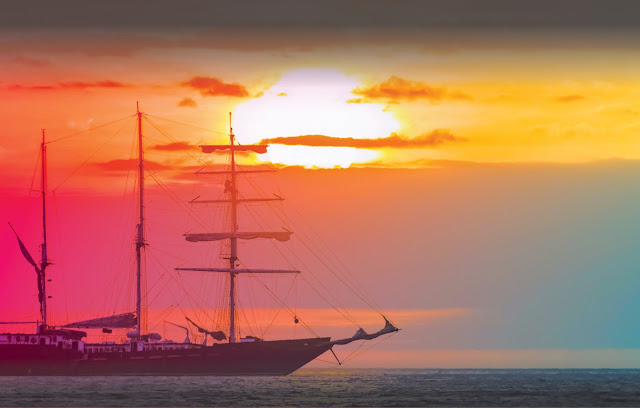 For the first time ever, Chicago’s iconic Music Box Theatre will host a classical live performance when Chicago Opera Theater (COT) debuts the Chicago premiere of Frank Martin’s 1942 “The Love Potion” (“Le Vin Herbe”) on September 30. Martin’s adaptation of the medieval legend of Tristan and Isolde chronicles the relationship of the two lovers who meet by deception, fall in love by magic and pursue their love in defiance of heavenly and earthly powers. “The Love Potion” will be performed at the Music Box Theatre (3733 N Southport). The press performance will be Friday, September 30 at 7:30 p.m.

Subsequent performances will be Oct. 1 and 9 at 3 p.m.  Due to a recently scheduled Chicago Cubs playoff game, there will be no performance on Oct. 7.

The oratorio begins with Tristan retrieving the reluctant Isolde so that she can be married to his uncle, King Mark. Isolde's mother has brewed a love potion meant to enchant King Mark into falling in love with her daughter. Tristan and Isolde mistakenly drink the potion when their maid confuses it for wine and they fall irrevocably in love. King Mark discovers Tristan and Isolde's love and declares vengeance. The lovers are able to escape the King and flee to the forest where they are quickly discovered propelling the story towards its climatic tragic end.

The libretto, originally by medievalist Joseph Bédier, was translated into English for this production by Hugh MacDonald.  “The Love Potion” will be conducted by Emanuele Andrizzi and directed and production designed by Chicago Opera Theater’s Stefan Edlis and Gael Neeson General Director Andreas Mitisek.

“Opera audiences are familiar with the story of Tristan and Isolde, thanks to Richard Wagner’s often-produced classic, but Martin’s take on this timeless tale is equally moving and musically hypnotic,” said Mitisek.  “One of our goals at Chicago Opera Theater is to bring our work to new audiences, and producing this work at the Music Box Theatre is in keeping with our mission.  It is an exceptional acoustic space and we are proud to bring this rarely seen work to Chicago audiences in a venue that serves it so well musically and aesthetically.”

Reviewing a 2013 production at the Berlin Staatsoper, A. J. Goldman of Opera News called Martin “distinctive and unjustly neglected” and called the piece “a work of startling economy and emotion” and that the composer had “succeeded in concocting a harmonically dense potion that, for all its dissonances, also goes down easy.” Bernard Holland, reviewing an earlier staging for the New York Times, called it “absolutely gripping… filled with dignity, mystery and a simplicity born of true sophistication… It ought to return so that more people can see and hear it.”  Jeremy Eichler, reviewing a 2014 Boston Lyric Opera production, called the piece “Mesmerizing… The score’s dissonant but ravishing musical language is a heady and highly personalized cocktail, indebted to Debussy yet at once updated and archaicized, its lulling waves giving voice to the characters’ strong emotions while at the same time keeping them at a precisely measured distance.”

The season continues on November 5 at the Studebaker Theater with three performances of “The Fairy Queen.” Composed in 1692 by Henry Purcell, “The Fairy Queen,” takes its inspiration from the mystical masques of Shakespeare’s “A Midsummer Night’s Dream,” creating the perfect world to explore relationships. On February 18, 2017, COT will present the co-world premiere with Long Beach Opera of “The Invention of Morel”. “Morel” is composed by Stewart Copeland and is based on “La invención de Morel” by Adolfo Bioy Casares. It is COT’s first-ever commissioned opera. The season will close with the Chicago premiere of Philip Glass’ 2013 “The Perfect American,” a fictionalized biography of Walt Disney’s life told through the musical lens of Philip Glass, melding delusions of the American Dream, immortality, and an empire.

Emanuele Andrizzi – Conductor
Andrizzi conducted “A Coffin in Egypt” at Chicago Opera Theater in 2015.  Educated in the rich musical tradition of the Rome's Conservatory as a conductor, composer, and pianist, Andrizzi has become a versatile musician with vast experience in the symphonic and operatic repertoires and a passion for the many areas of the musical arts. As a conductor, he has collaborated with various symphonic and operatic companies. In the past several years, he has conducted at the Lyric Opera of Chicago, San Diego Opera, Orchestradella Città di Ravenna, Chicago Philharmonic, Salt Creek Ballet, and New Philharmonic, among others. He has also collaborated with important music festivals, including the Millennium Park and the Ravinia Festivals.  In the next few months, Mr. Andrizzi is going to debut with several important operatic companies, among which the Opera Theater of St. Louis, where he will conduct a production of Puccini’s “La Bohème.”

An active teacher and performer, Andrizzi has worked since August 2013 as the Conductor and Head of the Orchestra Program at the prestigious Chicago College of Performing Arts at Roosevelt University. He often collaborates with young artist programs, including the Ryan Opera Center, the Lyric Opera of Chicago’s Young Artist Program. In addition, he has been invited to guest conduct in various university music programs, such as the Bienen School of Music at Northwestern University where he recently conducted Mozart’s “Le Nozze di Figaro,” after his earlier success in conducting “Così Fan Tutte.” He was the conductor of the Illinois All-State Orchestra in 2016 and is a recipient of the Honorable Mention award at the International Competition for Conductors of Contemporary Music “4X4 Prize” and a winner of the “P. Barrasso” International Competition for Chamber Music.

He recently directed and designed COT’s “gripping” (Chicago Tribune) “Macbeth” by Ernest Bloch in 2014. His other COT directing credits include ”La Voix Humaine” by Francis Poulenc, “Gianni Schicchi” by Giacomo Puccini, “Lucio Silla” by Wolfgang Amadeus Mozart,“Therese Raquin” by Tobias Picker, “Maria de Buenos Aires” by Astor Piazzolla and “The Emperor of Atlantis & The Clever One” by Viktor Ullmann and Carl Orff. Ricky Ian Gordon’s “Orpheus and Euridice,” at the Welles Park Pool in 2013, was critically and publicly acclaimed. Mitisek is on the board of directors for Opera America, the national service organization for U.S.  opera companies.

About Chicago Opera Theater
Chicago Opera Theater is an innovative, nationally recognized opera company that inspires a diverse community through immersive and thought-provoking opera experiences. COT, established in 1974 by Alan Stone, is a founding resident company of the Harris Theater for Music and Dance in Millennium Park. General Director Andreas Mitisek is known for his adventurous repertory, visionary leadership, fundraising skills and innovative audience-building initiatives.

Chicago Opera Theater has carved a significant place for itself in the operatic life of Chicago and has reached an audience of hundreds of thousands through its main stage performances, community engagement, education programs in Chicago Public Schools, as well as its renowned Young Artist Program.

Experience MORE OF THE DIFFERENT with Chicago Opera Theater!

For more information on the Chicago Opera Theater and its programs please visit www.chicagooperatheater.org.
Posted by Bonnie Kenaz-Mara at 1:57 PM No comments: