The Scottsboro Boys, Nominated for 12 Tony Awards, tells the Story of Nine African American Teenagers Put on Trial in Memphis for a Crime they did not Commit 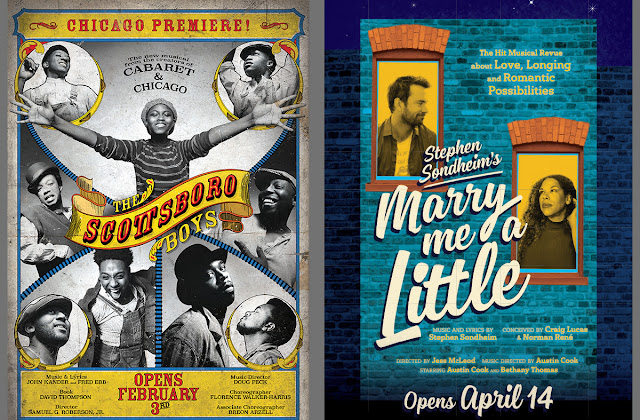 Porchlight Music Theatre is a perennial favorite of ours here at ChiIL Live Shows. They've earned a well deserved reputation for world class musical productions in an intimate space. We're particularly excited to see Larry Yando, another favorite of ours, make his Porchlight debut. He's the king of the pregnant pause and can work a silence better than just about anyone on the Chicago scene.

The thrilling, final collaboration by the creators of Cabaret, Chicago and Kiss of the Spider Woman, The Scottsboro Boys has been hailed as one of the most visionary and controversial musicals to grace the stages of Broadway and London. Nominated for 12 Tony Awards (including “Best Musical,” “Book of a Musical” and “Original Score”) and presented in the style of the notorious “minstrel show;” this true-life story of nine African American teenagers accused and put on trial in Memphis for a crime they did not commit is one of the most infamous events in our country’s history, igniting the start of the modern civil rights movement. 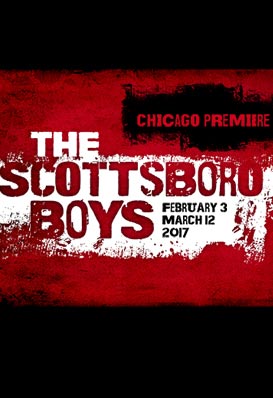 ABOUT SAMUEL G. ROBERSON, Jr., director
This is Samuel G. Roberson Jr’s debut with Porchlight Music Theatre. Roberson is the artistic director of Congo Square Theatre. His Chicago acting stage credits include: Samuel J and K (Steppenwolf Theatre), Civil War Christmas (Northlight Theatre), The Colored Museum and Sanctified (Congo Square), Living Green and The Lost Boys of Sudan (Victory Gardens Theatre), and The Ballad of Emmett Till (Goodman Theatre). Roberson also founded an education and outreach initiative with Congo Square Theatre called Y-BOOM (Young Brothers Owning Our Mission). As a two-time leukemia survivor he has always had a passion for giving back and started a non-profit organization, called Make Me A Match Project, dedicated to saving the lives of patients in need of a bone marrow transplant.

ABOUT DOUG PECK, music director
Doug Peck is a Porchlight Music Theatre artistic associate where he previously music directed and conducted Dreamgirls and Pal Joey as well as being the co-host and co-creator of Porchlight’s annual fundraiser Chicago Sings. Peck is the winner of six Jeff Awards (The Jungle Book; Porgy and Bess; Caroline, or Change; Carousel; Fiorello! and Man of La Mancha). His work has been heard in Chicago at Court Theatre, Chicago Shakespeare Theater, Goodman Theatre, Writers Theatre, TimeLine Theatre Company, Northlight Theatre, the Paramount Theatre, Drury Lane Theatre, Ravinia Festival and the Chicago Humanities Festival. Peck can be heard on the recordings Bright Young People: The Songs of Noël Coward, Foiled Again Live and Loving Repeating: A Musical of Gertrude Stein.

ABOUT FLORENCE WALKER-HARRIS, choreographer
Florence Walker-Harris makes her Porchlight Music Theatre debut with The Scottsboro Boys. Walker-Harris is the artistic director at Studio One Dance Theatre and trained in a variety of dance disciplines including Classical Ballet, the modern technique of Lester Horton, Kather, the Dunham technique, Jazz (strongly influenced by Mr. Frank Hatchet,) traditional Haitian folklore, African, Tap and Hip-Hop. She holds a Bachelor of Science in Sociology & Black and Latino Studies from the State University College at Oneonta in New York, and a Masters degree in Human Services Administration from National Louis University.

ABOUT BREON ARZELL, associate choreographer
Breon Arzell’s talents and choreography have been seen in the productions of Rutherford’s Travels (Pegasus Theatre), The House That Will Not Stand (Victory Gardens Theater) and The Hairy Ape (Oracle Productions), for which he received the 2016 Joseph Jefferson Award for “Artistic Specialization,” for his movement and step choreography. He specializes in hip hop, jazz, lyrical, contemporary and step and has choreographed for and danced with LaShelle's School of Dance and Twisted Dance Co. in Detroit and he has performed in And the Tony Goes To with Joel Hall Dancers & Center. Arzell teaches at Joel Hall Dancers & Center, Agassiz Elementary and Walter Payton High School. He has appeared in the film A Rose by Any Other Name and is television credits include: “Empire.” He specializes in hip hop, jazz, lyrical, contemporary and step.

ABOUT JAMES EARL JONES II, “Heywood Patterson”
James Earl Jones II returns to Porchlight Music Theatre where he was Jeff-nominated for his work in the award-winning Sondheim On Sondheim. Recently seen at The Goodman Theatre as the title character in the world premiere production of Carlyle, Chicago credits include October Sky, Elf, Dreamgirls and The Full Monty (Marriott Theatre); Satchmo at the Waldorf, The Secret Garden, The Good Book and Porgy and Bess (Court Theatre); Shrek (Chicago Shakespeare Theater); Cymbeline (First Folio Theatre); Sweet Charity and Company (Writers Theatre) and Mr. Rickey Calls a Meeting (Lookingglass Theatre Company). Jones’ national tour credits include The Gershwin’s Porgy and Bess. His television and film credits include “Pokerhouse,” “Chicago Fire” and “Empire.”

ABOUT MARK HOOD, “Mr. Tambo”
Mark Hood makes his Porchlight debut with this production. Recently seen in Sister Act at Marriott Theatre, Hood is a professional actor and recording artist most recently seen on NBC’s “The Voice” as a top 12 finalist. As an ensemble member of The Black Ensemble Theater, he has been seen in many productions including, Sounds So Sweet, At Last: A Tribute To Etta James, One Hit Wonders, The Curtis Mayfield Story, Chicago’s Golden Soul and Once Upon A People. Other credits include A Nativity Story (Congo Square Theatre); Hoodoo Love (The Collective Theater); Dreamgirls and The Color Purple (Theater 47).  Hood’s television credits include USA’s “Sirens” and NBC’s “Chicago Fire.”

ABOUT LARRY YANDO, “The Interlocutor”
Larry Yando makes his Porchlight debut with this production. Renowned as “Scrooge” in A Christmas Carol, his other Goodman Theatre credits include The Little Foxes, The Jungle Book and Candide (Jeff Award). Chicago credits include The Tempest, King Lear, and The Two Noble Kinsmen, (Chicago Shakespeare Theater); Angels in America (Jeff Award), Travesties, An Ideal Husband, and Ghosts (Court Theatre); Fake and Mother Courage and Her Children (Steppenwolf Theatre Company); The Dance of Death (Jeff Award), Bach at Leipzig, and Hamlet (Writers Theatre). Yando performed as “Scar” in the national tour of The Lion King for three years. He was honored as Chicago magazine’s “Best Actor in Chicago” and was the recipient of the 2014 Sarah Siddens Award for “Chicago’s Leading Man.”

ABOUT CYNTHIA CLAREY, “The Lady”
Cynthia Clarey makes her Porchlight debut with this production. Her reputation as a consummate singing actress has led to engagements throughout the world. Highlights of her repertoire include Handel’s Ariodante, Thomas’ Mignon and Bellini’s La Straniera (Wexford Festival); Monteverdi’s L’incoronazione di Poppea and Gershwin’s Porgy and Bess (Glyndebourne Festival); Berg’s Lulu (Chatelet in Paris) and Offenbach’s Robinson Crusoe (Opera Comique). She sang leading roles in several premieres, including Thea Musgrave’s Voice of Ariadne, which was her New York City Opera debut and she played Broadway and toured in seven countries with Peter Brook’s innovative La tragedie de Carmen. The films of Porgy and Bess and L’incoronazione di Poppea are available on DVD.

ABOUT PORCHLIGHT MUSIC THEATRE
Porchlight Music Theatre, now in its 22nd season, is nationally recognized for developing innovative new works, reimagining classic productions and showcasing musical theatre’s noted veterans and rising stars. Porchlight elevates the genre in Chicago by providing intimate and powerful theatrical experiences for its growing and diverse audiences. With the vision of Artistic Director Michael Weber, Porchlight builds on its role as Chicago’s only Equity not-for-profit company exclusively specializing in music theatre. Porchlight’s rich history includes the staging of more than 60 productions with 15 Chicago premieres and five world premieres. Through Porchlight’s “Off the Porch” new works program, the musicals of the next generation are developed and given a first audience. The School at Porchlight is Chicago’s new center for music theatre training in the areas of performance, writing and appreciation. The company’s many accolades include 16 Black Theatre Alliance nominations and two awards, as well as a total of 126 Joseph Jefferson Award nominations resulting in 39 Jeff Awards including four consecutive Best Production awards for Dreamgirls (2016), Sondheim on Sondheim (2015), Ain’t Misbehavin’ (2014) and A Class Act (2013)