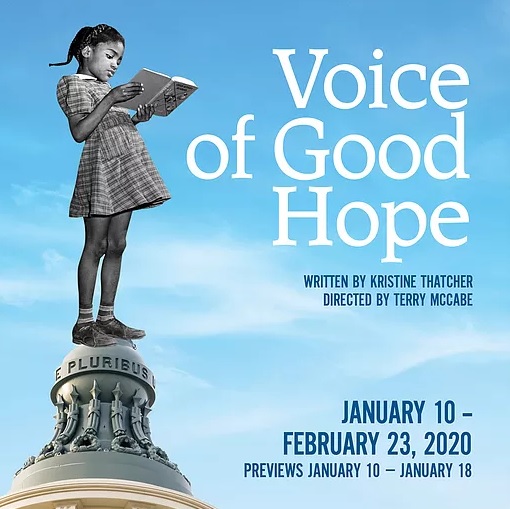 "FOUR STARS...captures the sense and sensibility of a bonafide powerhouse."
-Chicago Sun-Times 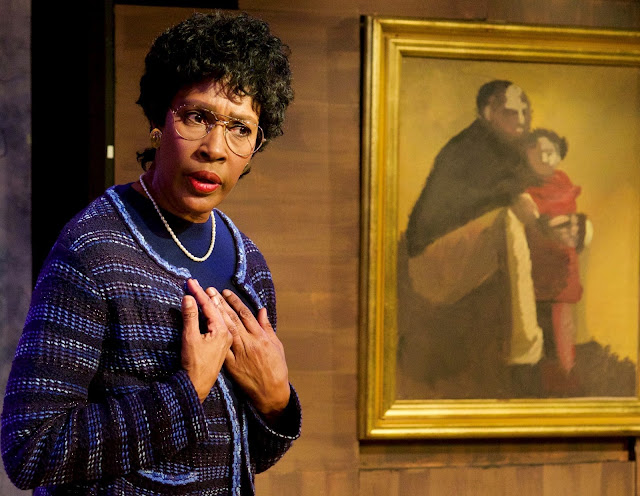 As the senate impeachment hearings wrap up, caucus votes roll in, and the 2020 campaigns amp up, political plays are filling the stages of Chicago as well. I was finally able to catch City Lit's excellent production, Voice of Good Hope last night. It was great to learn so much about Barbara Jordan, the first African American congresswoman from the Deep South, that I was unaware of before. This production is a gem of wit and wisdom. Women like Barbara Jordan give me hope for our democracy and our country's future. If you're tired of the lies and lunacy that have infiltrated Washington DC, come spend a few hours at City Lit and recharge. Recommended.

There are numerous strong shows on stage right now in Chicago, if you prefer your political figures to be articulate, intelligent and female. We recommend catching Voice of Good Hope at City Lit (Barbara Jordan), The Adult in the Room (Nancy Pelosi) at Victory Gardens, and A So-Called Qualified Woman (Sandra Day O’Connor), part of Valiant Theatre's New Works Festival. We also highly recommend Roe at The Goodman, for the back story on the Roe V. Wade ruling. 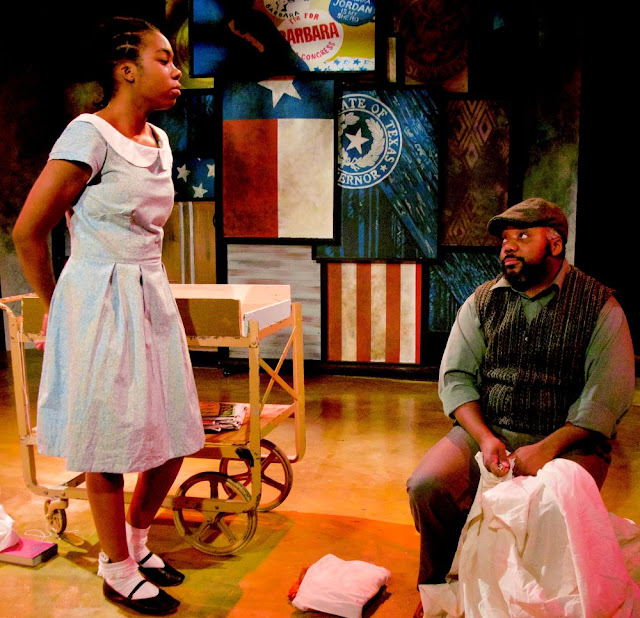 The storyline of Voice of Good Hope is delightfully nonlinear and I enjoyed meeting her first as a politician, before delving into her childhood to meet the Texas child she was. Heart (Barbara as a child) was deftly played by McKennzie Boyd the day I caught the production, alternating with her sister, MiKayla. It was stellar storytelling to see the seeds of Barbara Jordan's determination, intelligence, perception and personality already in play as she interacts with her relative (Jamie Black) and discovers early lessons on racism, religion, and character.

Her fierce determination, despite physical limitations is an inspiration. Although she ultimately died young, before age 60, of pneumonia and complications of leukemia and multiple sclerosis, her words and example live on. Now that we have another impeached president currently in the white house, Barbara's legendary history with Nixon's impeachment is all too timely. It was fascinating to me, how she protected her integrity and principles even after retirement, and wouldn't endorse or clear a fellow politician just because they were both black women, if she wasn't on board with her views. Conversely, it was a joy to see her navigating the good old boys network of cigarette smoking, whisky swilling Washington power brokers, and winning at it. She was truly an inspiration and a trailblazer today's women in politics might do well to emulate. 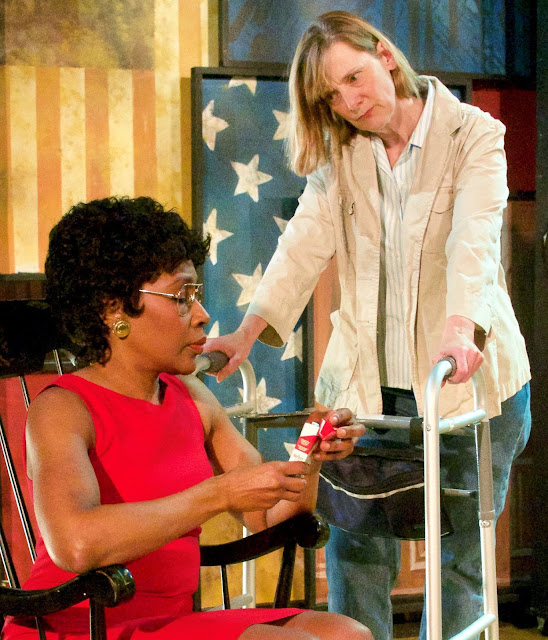 Don't miss this. We're nearing the end of the run for Voice of Good Hope, so catch it while you can. City Lit does an excellent job of keeping her legacy alive and inspiring audiences. Do leave extra time to search out parking. It can be a challenge around Edgewater.

Kristine Thatcher’s VOICE OF GOOD HOPE is a bio-drama of Barbara Jordan, the first African American congresswoman from the Deep South. Jordan earned national stature in the 1970’s as a member of the House Judiciary Committee that considered articles of impeachment against Richard Nixon and as the keynote speaker of the 1976 Democratic National Convention. Kristine Thatcher, who is City Lit’s playwright-in-residence, was nominated for Best New Work in the 2019 Jeff Awards for her play, THE SAFE HOUSE, which premiered at City Lit last fall. VOICE OF GOOD HOPE premiered at Victory Gardens Theater in 2000 and has been produced across the US since then.

The play follows Jordan from her childhood in Houston’s Fifth Ward through her receiving the Medal of Freedom from President Bill Clinton, and deals with her pivotal role on the House Judiciary Committee during its hearings concerning the possible impeachment of President Richard Nixon, her complex political relationship with Texas power broker Robert Strauss, her struggle with MS, and her twenty-year relationship with Nancy Earl, her companion and occasional speechwriter, and ultimately her caregiver. The play premiered at Victory Gardens Theater in 2000 and has been produced from New York to San Francisco in the years since then. 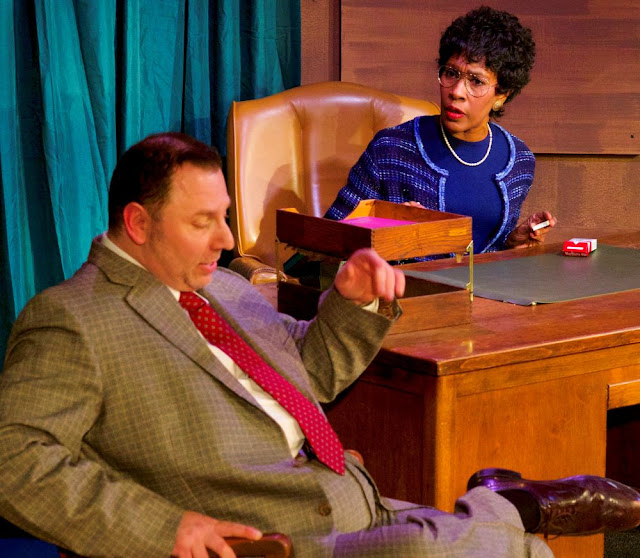 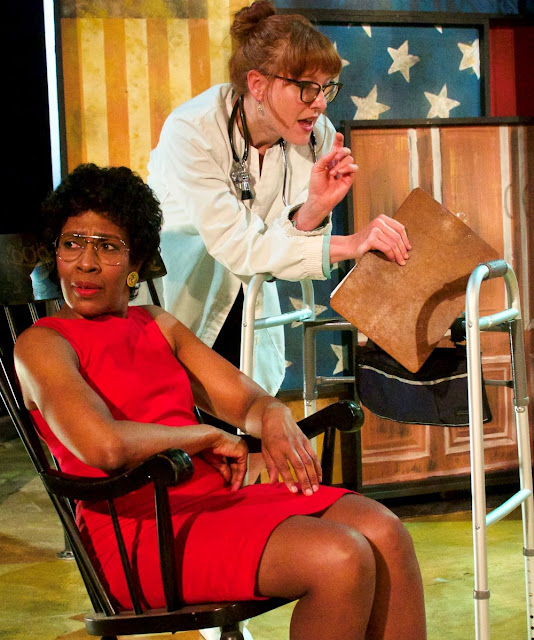 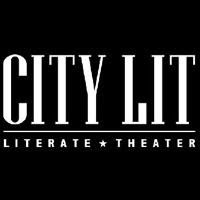 Posted by Bonnie Kenaz-Mara at 10:58 PM No comments: