A celebration of the artist many consider one of the most important composers in the history of American music, this stylish salute to “the Duke,” Duke Ellington, will transport audiences on a high-stepping, dynamic journey through the life and times of this great showman. From his early days at Harlem’s legendary Cotton Club through growing successes at Carnegie Hall, on Broadway, in Hollywood and around the world, this elegant, Tony

Award-nominated entertainment features a treasure trove of Ellington’s biggest hits, including  "Mood Indigo,” "Take the "A" Train,” "I'm Beginning to See the Light,” "Hit Me With a Hot Note and Watch Me Bounce,” "Perdido,” “It Don’t Mean a Thing,” "In a Sentimental Mood,” "Satin Doll” among many others.

ABOUT BRENDA DIDIER, director and choreographer
Brenda Didierreturns to Porchlight where she recently directed A Chorus Line and has directed and choreographed Billy Elliot, The Musical, In The Heights and Dreamgirls among others. Didier is a multiple Jeff Award recipient in both direction and choreography, and the recipient of After Dark Awards, BroadwayWorld awards and the National Youth Theatre award. She is the proud owner and artistic director of the Lincolnshire Academy of Dance, celebrating its 20th season. Other credits include work at the Goodman, Chicago Shakespeare, Second City, Marriott Theatre, The Paramount, Theatre at the Center, BoHo, Mercury Theatre Chicago, Theo Ubique Cabaret Theatre, Stage Left, Six Flags Great America, Busch Gardens Virginia, Cirque Shanghai at Navy Pier, T-Mobile’s national commercial “Home for the Holidays,” The Kenny Rogers Christmas Tour and the University of Illinois, University of Wisconsin and Carthage College.

ABOUT FLORENCE WALKER HARRIS, director and choreographer
Florence Walker-Harris made her Porchlight Music Theatre debut with The Scottsboro Boys and Duke Ellington’s Sophisticated Ladies marks her Porchlight directorial debut. Walker-Harris is the artistic director at Studio One Dance Theatre and trained in a variety of dance disciplines including Classical Ballet, the modern technique of Lester Horton, Kather, the Dunham technique, Jazz (strongly influenced by Mr. Frank Hatchet,) traditional Haitian folklore, African, Tap and Hip-Hop. She holds a Bachelor of Science in Sociology & Black and Latino Studies from the State University College at Oneonta in New York, and a Masters degree in Human Services Administration from National Louis University.

ABOUT JERMAINE HILL, music director
Jermaine Hill is a Jeff Award-nominated music director, actor, singer and arranger.  At Porchlight, most recently, he was the music director for the critically acclaimed Memphis. Other credits include Too Heavy for Your Pocket (TimeLine Theatre), The Music Man (Goodman Theatre), The Total Bent (Haven Theatre), Nell Gwynn (Chicago Shakespeare Theater), and Ragtime (Griffin Theatre). He has performed with Haven Theatre, Erasing the Distance, Onion Labs and appeared in an episode of Chicago Med. He is an assistant professor of theatre and music director at Columbia College Chicago, an ensemble member of Griffin Theatre and a graduate of Ithaca College and the New England Conservatory of Music. 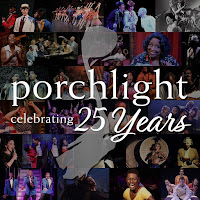 ABOUT PORCHLIGHT MUSIC THEATRE
As the home for music theatre in Chicago now in its 25th season, Porchlight Music Theatre is nationally recognized for reimagining classic productions, developing new works and showcasing musical theatre’s noted Chicago veterans and rising stars. Porchlight elevates the genre by providing
Intimate and powerful theatrical experiences of music theatre through the lens of the “Chicago Style.” The 2017–2018 year marked a milestone for Porchlight as the company became an Artist In-Residence at the historic Ruth Page Center for the Arts in Chicago’s Gold Coast. Porchlight’s rich history includes the staging of more than 70 productions with 15 Chicago premieres and five world premieres. Through Porchlight’s “Off the Porch” new works program, the musicals of the next generation are developed and given a first audience. The School at Porchlight is Chicago’s center for music theatre training in the areas of performance, writing and appreciation including the launch of a youth summer “Make Your Own Musical” Camp in 2017. The company’s many accolades include 30 Black Theatre Alliance nominations and 12 awards, as well as a total of 167 Joseph Jefferson Award nominations resulting in 42 Jeff Awards including five consecutive Best Production awards for The Scottsboro Boys (2017), Dreamgirls (2016), Sondheim on Sondheim (2015), Ain’t Misbehavin’ (2014) and A Class Act (2013).

Allstate is the principal sponsor for community outreach for Sophisticated Ladies.

Posted by Bonnie Kenaz-Mara at 12:51 PM No comments: