OPENING: US Premiere of “DON’T SMOKE IN BED” Via Chimera Ensemble at Collaboraction Studios June 15 - July 8, 2018 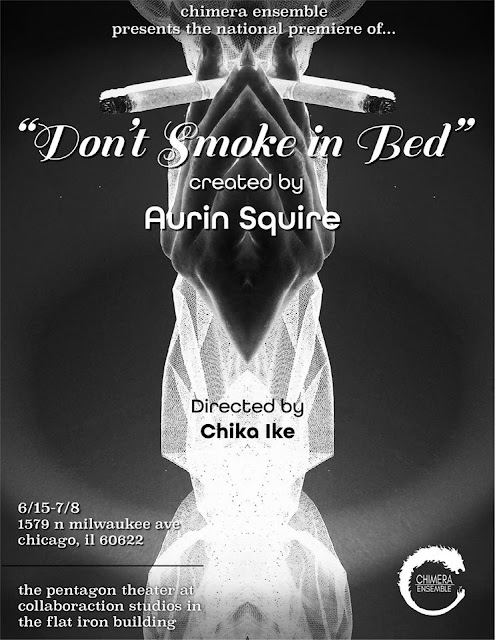 “Eye-opening and troubling, DON’T SMOKE IN BED will force audiences to re-evaluate their understanding of modern society.” – Michelle Keepence, THE UPCCOMING

Here at ChiIL Live Shows, we're eager to catch the US premiere. Chimera Ensemble is a favorite of ours, as is Chicago's own Chika Ike, directing. I'll be out for the press opening June 16th, so check back soon for my full review.

Chimera Ensemble's US Premiere of DON’T SMOKE IN BED, written by award-winning playwright Aurin Squire, and directed by acclaimed director Chika Ike, will open to the press on Saturday, June 16. Kai A. Ealy, who earlier this year appeared in MARY STUART at Chicago Shakespeare and FRANKLINLAND for Jackalope Theatre company; and ensemble member Nicole Fabbri, seen in Chimera’s SISTER CITIES, will play an interracial couple being interviewed about their marriage by an unseen journalist via webcam. Director Ike comes to the project from her recent sellout hit DONTRELL, WHO KISSED THE SEA, by Nathan Alan Davis, produced by First Floor Theater. Ike’s other recent directing credits include Janine Nabers’s A SWELL IN THE GROUND (The Gift Theatre) and Lloyd Suh’s FRANKLINLAND (Jackalope Theatre Company). 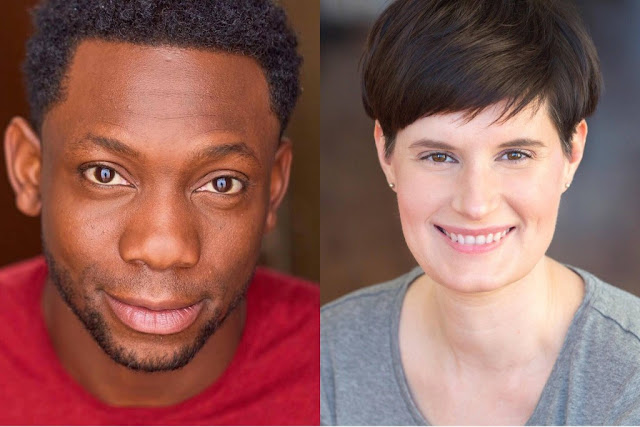 The production will go up June 15 - July 8 in The Pentagon Theater at Collaboraction Studios in The Flat Iron Arts Building, 1579 N. Milwaukee Ave, Chicago IL 60622. There will be one preview on Friday, June 15 at 7:30 pm. Opening night, followed by a reception, will be Saturday, June 16 at 7:30 pm.

DON’T SMOKE IN BED tells the story of Jamaican-American Richard (Ealy), and Irish-American Sheryl (Fabbri). As the couple open up about their relationship, inner demons are revealed and their effort to start a family together is complicated. DON'T SMOKE IN BED presents a rich, insightful exploration of how society's expectations influence what goes on behind closed doors. The play, which had its World Premiere in London in 2016, contains “intelligent, self-aware dialogue” and has been called “honest and raw” with “each scene more passionate than the last” (Annabel Mellor, THEATRE AND PERFORMANCE GUIDE AND GURU and Michelle Keepence, THE UPCOMING).

Aurin Squire (Playwright) is a Brooklyn-based playwright and journalist whose work has been called “refreshingly clever” by THE NEW YORK TIMES. He is a 2015 graduate of The Julliard School’s Lila Acheson Wallace American Playwrights Program, and took part in the Royal Court Theatre’s US Writer Programme, as well as the Dramatists Guild Fellowship. His plays include A FAMILY MANUAL FOR KWANZAA (The Kennedy Center MFA Workshop) THE GREAT BLACK SAMBO MACHINE (Lincoln Centre Lab and Ars Nova), DEFACING MICHAEL JACKSON (Nuyorican Poets Café workshop and winner of Lincoln Center’s Act One Prize), TO WHOM IT MAY CONCERN (Abingdon Theatre and ArcLight Theatre productions), and AFRICAN AMERICANA (Brooklyn Arts Exchange and Theatre 503).

Chika Ike (Director) is a Chicago-based director who comes to DON’T SMOKE IN BED fresh from a sold-out run of DONTRELL, WHO KISSED THE SEA, by Nathan Alan Davis, produced by First Floor Theater. Other recent directing credits include Janine Nabers’s A SWELL IN THE GROUND (The Gift Theatre) and Lloyd Suh’s FRANKLINLAND (Jackalope Theatre Company). She has also worked with Berkeley Repertory Theatre, Victory Gardens, The Gift Theatre Company, American Blues Theatre Company, Eclipse Theatre, and Prologue Theatre Company. Chika is an ensemble member at The Gift Theatre Company and has received the SDCF Gielgud Directing Fellowship and the Bret C. Harte Directing Fellowship at Berkeley Repertory Theatre. Chika is also a member of the 2017-18 SDCF Observership class, and a member of the Victory Gardens Directors Inclusion Initiative.

Tickets may be purchased HERE.

ACESSIBILITY:
Access is an important part of our mission at Chimera Ensemble. Through discussions within the Ensemble and with Chimera’s amazing collaborators in the Chicago community, we attempt to create an environment in which performers, directors, designers, playwrights, and audience members feel welcome to work with us and experience our productions. Season Two marks a new chapter in our mission of access, as every performance will feature Open Captioning, rather than the norm of this programming only being offered for one performance during a production's run. By providing Open Captioning for every performance, Chimera hopes to create not only a more cohesive and inclusive theatrical process that better reflects the varied ways in which individuals experience the world, but also a model for other theater companies to follow. DON’T SMOKE IN BED will also feature one Audio Described performance proceeded by a Touch Tour, date TBD.

CHIMERA’S COMMUNITY FUND:
Part of Chimera Ensemble’s mission as a theatrical platform is to give back to the community, so for each show we produce we partner with a local organization whose work matches the themes of the production. We collect money and raise awareness for our partner organization. Please stay tuned for an upcoming announcement on Chimera’s partner organization for DON’T SMOKE IN BED.
Posted by Bonnie Kenaz-Mara at 7:59 PM No comments: