OPENING: Valentine Fun Abounds With THE GOLDEN GIRLS: The Lost Episodes – The Valentine Edition Via Hell in a Handbag Productions February 8, 2019 – March 10, 2019 at Stage 773 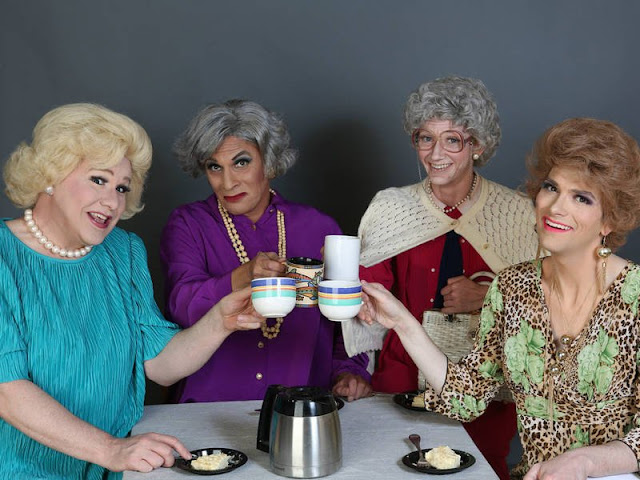 I'll be ChiILin' with Chi, IL's Hell in a Handbag for the press opening of THE GOLDEN GIRLS: The Lost Episodes – The Valentine Edition, February 10th, so check back soon for my full review. Hell in a Handbag is a long time favorite of ours here at ChiIL Live Shows, and their Golden Girls parodies are something to see!

THE GOLDEN GIRLS – The Lost Episodes series began in 2017 and has been going strong ever since. Chicago loves Handbag’s long-running parody of the classic TV sitcom with original scripts. Get your tickets early and bring a sweetheart!

Poor Dorothy can’t find a date for the Sadie Hawkins dance at the Miami Senior Center. When Rose sets her up with a man with a colorful past, the evening takes a turn for the bizarre. Meanwhile Sophia locks horns with her arch rival, Sylvia Martinelli and the two engage in a steamy battle of wits.

David Cerda (Playwright) is the Artistic Director and co-founder of Hell in a Handbag Productions. Cerda has written or collaborated on POSEIDON! An Upside Down Musical, Caged Dames, Sexy Baby, Lady X: The Musical, Christmas Dearest, Rudolph the Red-Hosed Reindeer, SCARRIE-The Musical, The Golden Girls: The Lost Episodes (Volumes 1 & 2), The Golden Girls: The Lost Episodes: The Holiday Edition, The Halloween Edition, and many others. He has also worked as a songwriter with Amazon Studios and as an actor around Chicago. In 2016, Cerda was in inducted into the Chicago GLBT Hall of Fame and in 2017 he received a Lifetime Achievement Jeff Award for his contributions to the Chicago theater community and philanthropic efforts.

Jon Martinez (Director) is glad to be back on board after directing and choreographing Snowgirls – The Musical with Handbag. Other credits include: The Buddy Holly Story (American Blues); Crumbs From The Table of Joy (Raven Theatre); The View Upstairs (Circle Theater); In The Heights (Civic Theatre);On A Clear Day… (Porchlight Music Theater); It’s Only a Play, Priscilla Queen of the Desert (Joseph Jefferson Award nomination) (Pride Films & Plays); Rock of Ages (Timberlake Playhouse); Tonya & Nancy The Rock Opera (Chicago Premiere) (Underscore Theatre); 3C (Red Orchid); We’re Gonna Die (Haven Theater/Steppenwolf); LIZZIE (Firebrand Theatre); Xanadu (ATC); Carrie, Murder Ballad (Bailiwick Chicago). His first ballet, Le Apache, premiered in 2016 at The Harris Theater in Chicago. Next up, he will be directing and choreographing the regional premiere of Be More Chill at Playhouse Square Cleveland.

About Hell in a Handbag Productions
Hell in a Handbag is dedicated to the preservation, exploration, and celebration of works ingrained in the realm of popular culture via theatrical productions through parody, music and homage. Handbag is a 501(c)(3) Not for Profit.
Posted by Bonnie Kenaz-Mara at 1:57 PM No comments: