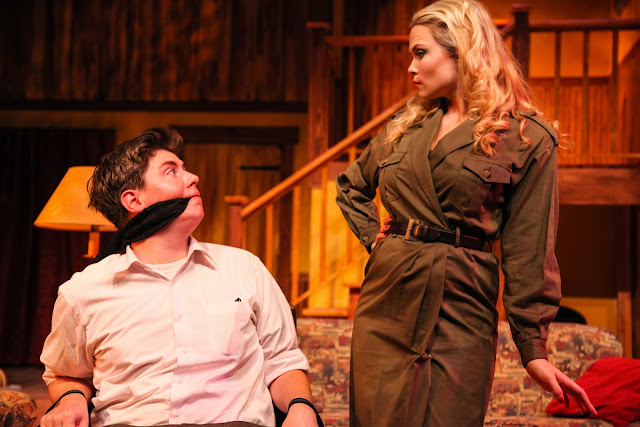 ACCOMPLICE begins as a conventional English thriller set in a country home: a sex-starved wife and her lover plot the murder her stuffy husband.  But nothing is quite what it seems in this outrageous whodunit. Four characters, bent on revenge, take the audience on a theatrical thrill ride of plot twists and turns guaranteed to keep everyone guessing until the very end.

About the Playwright:
Rupert Holmes’ first work for theater was The Mystery of Edwin Drood, for which he created the book, music, lyrics and orchestrations. When Drood won the Tony Award for Best Musical, Holmes simultaneously became the first sole recipient of Tony awards for both Best Book and Best Score. Drood and Holmes received the same honors from the New York Drama Desk, with a fourth award going to Holmes in the additional category of Best Orchestration. Holmes also received the coveted Edgar Award from the Mystery Writers of America, the first Broadway author-composer to be so honored. Accomplice is his second work for theater and his first non-musical.

About the Director:
Dante J. Orfei has been the Artistic Director at the Jedlicka Performing Arts Center for over 25 years. He is a graduate of the University of Notre Dame and has produced and directed a travel documentary titled European Sojourn, which aired on PBS. Dante also directed the U.S. Premiere of the musical Metropolis and worked closely with the show’s creator, Academy and Grammy Award-winner Joseph Brooks on the development of the show. Dante directed the national regional theatre premiere of Brooks’ most recent Broadway show, In My Life. He has studied with Tony Award-winners Harold Prince and Jules Fisher. He directed the Midwest Regional Premiere of the Queen rock musical, We Will Rock You, and has also directed the World Premiere of Nefertiti – The Musical, as well as Premiere Chicago Productions of Little Women, Andrew Lloyd Webber’s Aspects of Love, Blood Brothers, Jekyll and Hyde, The Baker’s Wife, and numerous plays by Olivier Award-winning playwright Ray Cooney, including the U.S. Premiere of Cooney’s It Runs in the Family. Dante has directed well over 175 stage productions on the professional, dinner theatre and academic levels.

Jedlicka Performing Arts Center strives to bring audiences a variety of theatrical pieces, from the classics to premiere works, providing an environment of excitement and discovery for its patrons while maintaining a unique performance venue for its artists.  For additional information, visit www.jpactheatre.com.

Posted by Bonnie Kenaz-Mara at 12:30 PM No comments: