Films On Our Radar:

The Chicago Film Critics Association (CFCA) Festival kicks off on Friday, May 20th, 2016 at The Music Theatre!

This year's lineup will include 25 feature films and shorts. This programming brings together an eclectic array of films ranging from raucous comedies and foreign-made dramas to thought-provoking documentaries and midnight genre films.

Now in its fourth year, the CFCA festival will run May 20-26th, 2016 and will be held once again at Chicago's historic Music Box Theatre. Click HERE for Program Scheduling.

Passes are also on sale HERE

The CFCA will be programming the following titles as part of this year's program at The Music Box Theatre:

Beauty and the Beast
Christophe Gans, the director of such visually stunning films as "Brotherhood of the Wolf" and "Silent Hill," unites two of France's biggest stars, Vincent Cassel and Lea Seydoux, to produce this lavish live-action version of Jeanne-Marie Leprince de Beaumont's classic fantasy story that has already served as the basis for two classic screen adaptations from Jean Cocteau and Disney. For those of you who somehow missed those, it tells the story of a beautiful young woman who agrees to become the prisoner of a ferocious beast in order to save her beloved father's life and eventually learns that there is more to him than his gruff exterior would suggest.

The Blackcoat's Daughter
Set on a nearly deserted prep school campus during winter break, the debut feature from writer/director Oz Perkins (son of Anthony Perkins) follows two students (Kiernan Shipka and Lucy Boynton) who have been left behind and a young woman (Emma Roberts) who has just left the hospital and is hitchhiking towards the school with a seemingly good-natured couple (James Remar and Lauren Holly). Needless to say, something is clearly amiss but what exactly it is and how it connects these seemingly unrelated characters is what gave audiences a start when it premiered at the Toronto International Film Festival, where it was formerly known as “February”.

Goat
Co-written by David Gordon Green and based on the memoir by Brad Land, this harrowing drama follows a 19-year-old boy, who, following a brutal assault, pledges the college fraternity to which his older brother belongs. As the hazing rituals grow more and more dangerous, he finds himself reconsidering his loyalty to both his brother and his new-found allies. Directed by former documentarian Andrew Neel and co-starring Nick Jonas and James Franco, the film offers an eye-opening look at some of the more appalling aspects of masculinity in contemporary society.

Hunt For the Wilderpeople
From Taika Waititi, the writer-director-star of "What We Do In The Shadows," comes the comedic coming-of-age story of Ricky (Julian Dennison), an unruly orphan boy who is dropped off at a remote farm with the latest in a long string of foster parents, the cheerful Aunt Bella and the more taciturn Uncle Hec (Sam Neill). For a while, everything works out fine, but when a tragedy strikes that threatens to remove Ricky to another family, he and Uncle Hec take off into the bush and, thanks to a series of odd events, unexpectedly find themselves at the center of a nationwide manhunt.

Life, Animated
Based on the memoir by Ron Suskind, this documentary tells the story of his autistic son Owen and how they still managed to communicate with each other utilizing characters and dialogue from Disney animated films that were the only thing that seemed to truly engage the boy. Mixing live-action and animation, the film shows  how Owen was able to utilize his responses to these films as a way to explore his own personal feelings while growing up, and to help him as he makes his first steps towards adulthood and independence.

Morris From America
Directed by Chad Hartigan (whose previous feature, "This is Martin Bonner," was part of the first Chicago Critics Film Festival), this crowd-pleasing comedy follows the adolescent misadventures of a 13-year-old American boy (Markees Christmas) growing up in Germany while living with his father (Craig Robinson). This film was a hit at this year's Sundance Film Festival, where it won the Waldo Salt Screenwriting Award and a Special Jury Award for Individual Performance for Robinson.

Trash Fire
In this super-dark comedy with horrific overtones from Richard Bates Jr. (whose "Excision" managed to make even the most dedicated genre buffs squirm in their seats), Adrien Grenier stars as an unpleasant young man who, to please his pregnant girlfriend (Angela Trimbur) and prove that he can be a reliable father figure, agrees to visit the estranged grandmother (Fionnula Flanagan) and sister (Annalynn McCord) that are his only living relatives. Although the two make the trip in order to allow him to bury the hatchet at last, they soon discover that family ties can choke as well as bind.

American Fable
American Fable is a fairytale thriller set in the 1980s Midwest farm crisis about a courageous girl living in a dark and sometimes magical world. When 11-year-old Gitty discovers that her beloved father is hiding a wealthy man in her family’s silo in order to save their struggling farm, she befriends the captive in secret and quickly becomes trapped between protecting her family and her soul.

Another Evil
After encountering a ghost in his family’s vacation home, a modern artist and his wife hire an “industrial-grade exorcist” to get rid of the beings. But he soon realizes that ridding the home of evil won’t be as simple as it seems.

Contemporary Color
In the summer of 2015, legendary musician David Byrne staged an event at Brooklyn’s Barclays Center to celebrate the art of Color Guard: synchronized dance routines involving flags, rifles, and sabers. Recruiting performers that include the likes of Saint Vincent, Nelly Furtado, Ad-Rock, and Ira Glass to collaborate on original pieces with 10 color guard teams from across the US and Canada.

Dark Night
The lives of six strangers intersect at a suburban Cineplex where a massacre occurs.

Demon
A bridegroom is possessed by an unquiet spirit in the midst of his own wedding celebration, in this clever take on the Jewish legend of the dybbuk.

Disorder
Vincent is an ex-soldier with PTSD who is hired to protect the wife and child of a wealthy Lebanese businessman while he’s out of town. Despite the apparent tranquility on Maryland, Vincent perceives an external threat.

Seventeen-year-old Anne just fell in love with Sasha, the most popular girl at her LA public high school. But when Anne tells her best friend Clifton—who has always harbored a secret crush—he does his best to get in the way.

The Fits
While training at the gym 11-year-old tomboy Toni becomes entranced with a dance troupe. As she struggles to fit in she finds herself caught up in danger as the group begins to suffer from fainting spells and other violent fits.

In a Valley of Violence

With Writer/Director Ti West in attendance!

A mysterious stranger, and a random act of violence drags a town of misfits and nitwits into the bloody crosshairs of revenge.

With Director Patricia Rozema in attendance

In the not-too-distant future, two young women who live in a remote ancient forest discover the world around them is on the brink of an apocalypse. Informed only by rumor, they fight intruders, disease, loneliness and starvation.

With Adam Pally in attendance

Josh treats what would have been his bachelor party as an opportunity to reconnect with his friends.

With Writer/Director Ira Sachs in attendance!

A new pair of best friends have their bond tested by their parents’ battle over a dress shop lease.

Lo and Behold: Reveries of the Connected World
Werner Herzog’s exploration of the Internet and the connected world.

My Blind Brother
The rivalry between two brothers reaches a fever pitch during a charity swim competition.

Nuts!
The mostly true story of Dr. John Romulus Brinkley, an eccentric genius who built an empire with his goat-testicle impotence cure and a million-watt radio station.

Joe (Martin Starr) is a programmer and self-quantifier who uses the data he collects to make sense of the world and control his panic attacks. He and his wife Emily (Mae Whitman), a member of the Neo-Futurists, are happily married until they start working together on a project that promises to replicate Emily’s personality. What begins as a collaboration that strengthens their relationship quickly spirals into a technological love triangle in this dark comedy about love in the age of anxiety shot on location in Andersonville.

The Other Half
Nickie Bellow (Tom Cullen) is a self-destructive drifter, ever mourning the disappearance of his younger brother. Then he meets Emily (Tatiana Maslany) and the two form an immediate, inseparable bond – it is love at first sight deepened by a shared sense of sorrow. After a short amount of time, his PTSD and her bipolar disorder surface complicating their new-found intimacy. For Nickie and Emily, time does not heal all wounds, but could real love indeed conquer all?

For the most current details, along with information on the festival as a whole and a look back at previous years, please go to www.chicagocriticsfilmfestival.com 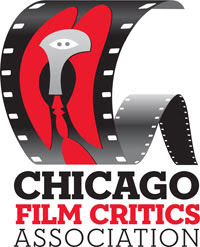 About The CFCA-
The CFCA has always been dedicated to supporting and celebrating quality filmmaking that has something to say about our world, our lives, and our society. In the past, while it supported and fought for the continued role of film critics in the media, the CFCA's primary public interaction was through the announcement of its annual film awards each December. In recent years, however, the CFCA moved aggressively to expand its presence on the Chicago arts scene and to promote critical thin king about cinema to a wider base. In 2012, in addition to re-launching a late-winter awards ceremony, CFCA members presented numerous film screenings at theaters like the Studio Movie Grill in Wheaton, and Muvico Theaters Rosemont 18 in Rosemont. Illinois. CFCA members also team-taught a new Young People's Film Criticism Workshop at Facets Multimedia that emphasized not just film analysis and criticism, but also writing skills to middle- and high-school students, many of whom were attending the course on lower-income scholarships. With this film festival, we intend to take the next step.

Posted by Bonnie Kenaz-Mara at 7:33 PM No comments: