OPENING: Midwest Premiere of By the Water at Northlight 3/16-4/23

Hurricane Sandy has just ravaged the lifelong home of Marty and Mary Murphy. But the storm has ripped apart more than just the walls: with their neighbors too devastated to stay, the couple’s beloved Staten Island community is in danger of disappearing forever. Determined to rebuild, Marty wages a campaign to save his neighborhood and his home, but when the Murphys’ sons arrive to help their parents dig out, past betrayals come rushing to the surface.

With fierce compassion and poignant humor, By the Water reminds us that the very powers that tear us apart can also bring us together.

“Sharyn is a wonderful talent and we are proud to have her work on our stage directed by longtime collaborator Cody Estle, who has assisted me on many projects here at Northlight,” said Artistic Director BJ Jones. “In this play, natural disaster serves as a metaphor for the social and political change that forces generations to confront very real issues about their own lives—lives built on values that have become outmoded. Sharyn's sharp sense of humor built on rich character development is sprinkled throughout, and the themes of justice and family values and loyalties emerge full-throated in her dialogue and her surprising plot.”

•In the neighborhood that By the Water is based on,
there were 184 families living on the water.
When Governor Cuomo’s buyout plan was proposed,
all but 40 families took it.

Director Cody Estle adds, “It’s about confronting deep-seated personal problems in the face of a generational divide and finding a way to move forward. Times are changing and it’s not about you and me; it’s about our grandchildren, and their children. It’s about all of us making sacrifices today to create a better tomorrow. The harrowing backdrop of a natural disaster also allows for unexpected wit and humor—all in all I think it will engage, move and inspire audiences.”

•By the Water was the recipient of the 2015 American Theater Critic’s Association Francesca Primus Prize, awarded annually to an emerging woman playwright.
The Primus Prize was founded in 1997 in memory of actress and critic
Francesca Primus. Previous awardees include Jennifer Haley, Stefanie Zadravec,
Karen Zacarias, and Lynn Nottage. •By the Water marks Cody Estle’s directorial debut for Northlight Theatre where he previously served as an assistant director to BJ Jones on Charm, Season’s Greetings and Stella & Lou, and others, as well as an artistic assistant for the 2014-2015 season.

CODY ESTLE (Director) is a Chicago-based freelance director. Directing credits include The Assembled Parties, A Loss of Roses, Dividing the Estate, Vieux Carré (named by Chicago Tribune as one of the Year's Best in 2014), Good Boys and True, Brighton Beach Memoirs, Boy Gets Girl and Dating Walter Dante at Raven Theatre; Scarcity at Redtwist Theatre; The Seagull and Watch on the Rhine at The Artistic Home; Don't Go Gentle at Haven Theatre; Uncle Bob at Mary-Arrchie Theatre Company and Hospitality Suite at Citadel Theatre. He’s had the pleasure of assistant directing at Northlight, Steppenwolf, Goodspeed Musicals, Court, Writers, Next Theatre and Strawdog. Estle is the Associate Artistic Director at Raven Theatre, an associate member of SDC and a graduate of Columbia College Chicago.

•Sharyn Rothstein’s idea for By the Water sprang from a visit to the areas of Staten Island designated for a buyout following Hurricane Sandy. She said, “Leaving behind a community, a lifetime of memories, seemed like an enormous leap of faith and an incredibly difficult decision, but the destruction was gut wrenching. Yet, in front of one neat, clearly beloved house, a man who looked to be in his sixties was tending his lawn. With his whole neighborhood in ruins, with a majority of his neighbors already gone or figuring out how to leave, here was a man clearly standing firm. The image of him standing there amid so much loss was the genesis of my play.”

SHARYN ROTHSTEIN (Playwright) is a playwright and television writer, whose plays and musicals have been workshopped and produced around the country, as well as internationally. Her play By The Water was first produced by Manhattan Theater Club and Ars Nova in 2014 and was the recipient of the 2015 American Theater Critic’s Association Francesca Primus Prize for a play by an emerging woman playwright. Her play All The Days was the recipient of the Edgerton Foundation Award and was produced at the McCarter Theater Center in 2016, directed by Emily Mann. In addition to playwriting, Sharyn is a writer for the USA Network drama SUITS. She holds an MFA in dramatic writing from NYU and a Masters in Public Health from Hunter College, with a concentration in Urban Health.

JANET ULRICH BROOKS (Andrea Carter) returns to Northlight after previously appearing in Ten Chimneys. A company member of TimeLine, her credits include Bakersfield Mist, The How And The Why, Apple Family Plays and Jeff-nominated performances in All My Sons, When She Danced, Not Enough Air and Weekend.  Other credits include Vanya and Sonia and Masha and Spike, The Seagull (Goodman); Crazy For You (Drury Lane); Women Laughing Alone With Salad (Helen Hayes nomination - Woolly Mammoth Theatre, DC); Failure: A Love Story (Victory Gardens); Golda’s Balcony (Jeff Award – Pegasus Players) and work with Steppenwolf, ATC, About Face and Writers.  TV: Sense8, Chicago Fire, Chicago Justice and Boss.  Film: Divergent, Conviction, One Small Hitch and Fools. A recipient of the Ed See Outstanding Theatre Alumnus Award from University of Central Missouri, Janet is represented by Gray Talent Group.

Jordan Brown (Sal) returns to Northlight where he previously appeared in White Guy on the Bus and Sense & Sensibility. Other Chicago credits include the Goodman’s Wonderful Town, Vanya and Sonia and Masha and Spike, Brigadoon (Jeff Award nomination for Best Supporting Actor, Musical) and A Christmas Carol; Iphigenia In Aulis (Court); The Pitmen Painters and Juno (TimeLine) and In The Company Of Men (Profiles). Off-Broadway, he played Claudio in Much Ado About Nothing (Theatre Row in the Beckett Theatre). In Baltimore, he appeared in A Skull in Connemara (Centerstage Theatre). TV credits include Sirens and Crisis. Jordan can also be seen playing the role of Kirt in NBC's web series Bobby & Iza. He is a graduate of the University of the North Carolina School of the Arts.

Patrick Clear (Phillip Carter) returns to Northlight where he was seen as Mr. Kirby in last season’s You Can’t Take It With You. His other Northlight appearances include The Mousetrap, The Miser, Dr. Jekyll & Mr. Hyde and Pride and Prejudice. He has appeared in more than 60 productions with Chicago area theatres including Goodman, Chicago Shakespeare, Steppenwolf, Writers and Remy Bumppo. His regional credits include appearances at Hartford Stage, the Asolo Repertory Theatre, Indiana Repertory Theatre, Cleveland Playhouse, Maltz Jupiter Theatre, Arena Stage, the Guthrie Theater, American Shakespeare Theatre, Centerstage, the Huntington Theatre and the Cincinnati Playhouse in the Park. He appeared on Broadway in Noises Off and Hollywood Arms. Film and television credits include Empire, The Dark Knight, Chicago PD, Boss, The Untouchables and Early Edition.

Joel Reitsma (Brian) is a company member with Steep Theatre, where he performed in Bobby Clearly and Motortown (Joseph Jefferson Award Nomination). He is also a co-founder, writer, performer, and director for The LIVINGroom, a Solo Performance ensemble that tells personal, autobiographical, and universal stories live on stage. Other Chicago credits include A Loss of Roses and Vieux Carré (Raven); Lisbon Traviata (Eclipse); Ecstasy (Cole Theatre); Love and Understanding (Redtwist); and The Brig (Mary Arrchie).

•Hurricane Sandy was the deadliest and most destructive hurricane of the 2012 Atlantic hurricane season, and the second-costliest hurricane in United States history. In the US, Hurricane Sandy affected 24 states, with particularly severe damage in New Jersey and New York.  Of the five boroughs, Staten Island – where By the Water is set – faced the most death and damage. 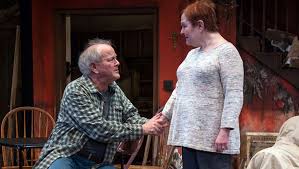 Northlight is continuing its popular special event series in conjunction with each production.  All events are free.

Inside Look: By the Water
March 29 at 10:45am
at Bernard Weinger JCC
300 Revere Dr, Northbrook, IL
Explore the ​social and ​environmental context of By the Water, as well as aspects of the creative process through a discussion and Q&A session with director Cody Estle​.

Panel Discussion: Changing Climate, Changing Lives
April 1 at 4:00pm
at Evanston Public Library
1703 Orrington Ave, Evanston IL
In Northlight Theatre's By the Water, the Murphy family and their Staten Island neighbors lose their home to Hurricane Sandy - a natural disaster amplified by global warming. Join a panel of environmental experts to discuss the very human implications of climate change, and the many ways our changing environment can affect our lives.

Now in its 42nd season, the organization has mounted over 200 productions, including nearly 40 world premieres. Northlight has earned 198 Joseph Jefferson Award nominations and 34 Awards. As one of the area’s premier theatre companies, Northlight is a regional magnet for critical and professional acclaim, as well as talent of the highest quality.

•By The Water received its world premiere through The Writer’s Room, a new development partnership between Manhattan Theater Club and Ars Nova. The Writer’s Room is designed to commission, develop and support playwrights in the process of creating new work. By the Water marked the first world premiere production from the program and opened off-Broadway in November 2014 at MTC’s Studio at Stage II in New York’s City Center.

Posted by Bonnie Kenaz-Mara at 12:39 PM No comments: