REVIEW: World Premiere of INVISIBLE Via Her Story Theater Now Playing Through November 3, 2019 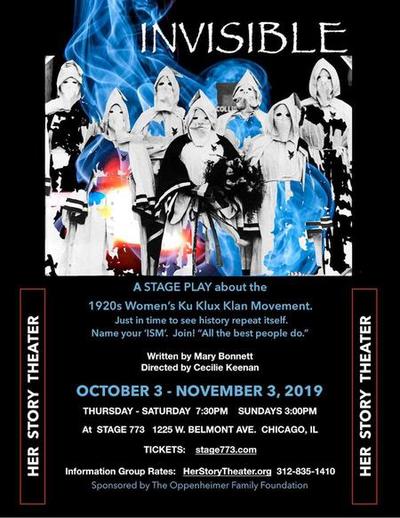 Her Story Theater's Invisible is full of characters you'll love to hate. These women, in a small Mississippi town in 1925, are the most dangerous kind of self-righteous, southern bigots, who justify hate crimes, violence, and even murder in the name of Christianity and white supremacy. Though subservient to their husbands and sometimes even domestic violence abuse victims themselves, these women have power and use their smarts, social standing and ability to ostracize to amass an army for the first Women’s Ku Klux Klan. The clan not only harassed and hurt African Americans, but Jews, Catholics, and even disenfranchised whites who were perceived as "other" as well. Greed, deception, corruption and theft ran rampant among the ranks of the KKK movement, which eventually imploded, but not before amassing a frightening number of members. This period piece is a stark reminder of how little has changed in 100 years, as white supremacy, scapegoating immigrants, and race based discrimination is once again gaining mainstream credibility in our current political climate. 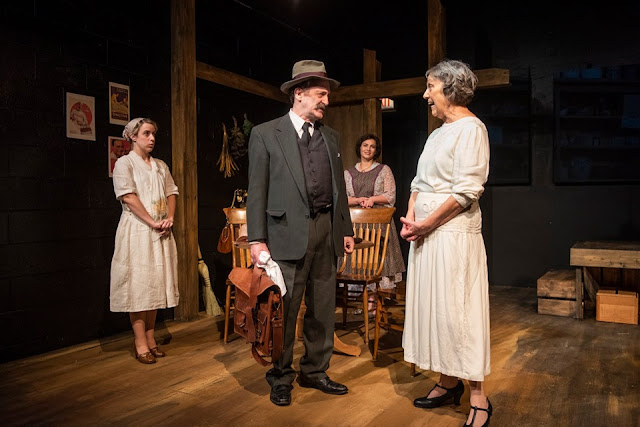 Invisible is a character driven exploration of a moment in history, between world wars, where immigrants were maligned, race based violence was condoned, and patriotism and Christian religion got twisted to justify horrific ends. It's an era of errors we'd best remember as a country, as we teeter on the bring of repeating it.

There is a bright spot in the morass. Without revealing too many spoilers, there are those who step up embrace human decency regardless of skin color, heritage or religion, just because another person is in need. Invisible has a wonderful character, a well educated artist from Chicago, who has gone back to the location of family trauma and tragedies to challenge the status quo with poetry, music, activism and acts of human kindness. We're also huge fans of the swamp foundling who can hear and speak to the dead. There's also a compelling mystery around the lineage of "ghost girl" and an intriguing dose of the supernatural, which makes Invisible great storytelling. This production has nuance and depth, and avoids coming across as preachy, on a tough topic. 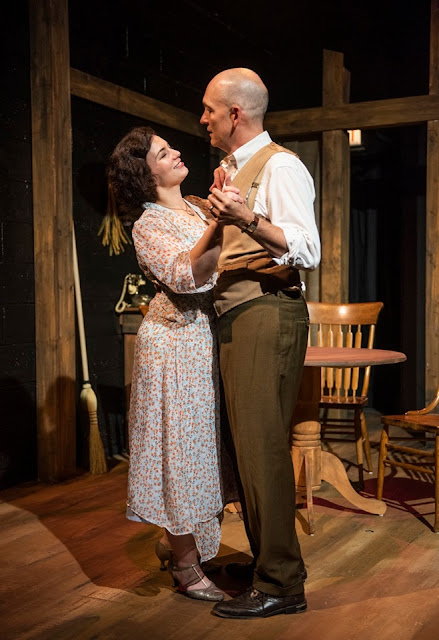 Invisible also does an excellent job of including conflicted characters, trying to do the right thing. In every movement there are those who embrace an ideology for financial reasons, out of fear, or for other reasons aside from true belief in the cause. It's telling that the core KKK women relied on bullying and fear of financial ruin to control this segment of their base. Even white women were seen as "other" if they were Irish, not born in town, or showed any slight immodesty, impropriety, or rebellion. 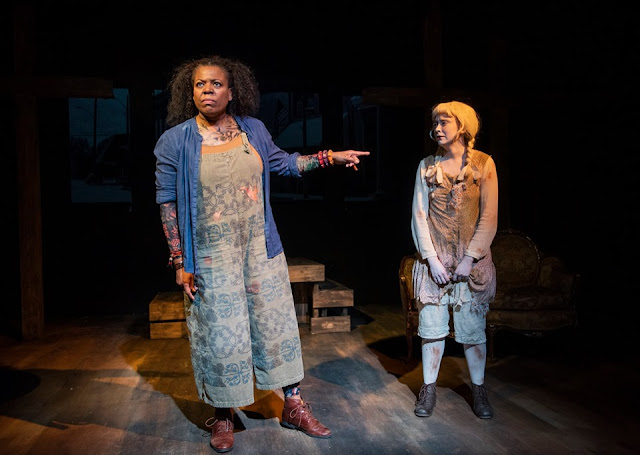 The casting is excellent, and Maddy Flemming and Lisa McConnell are particular standouts. Though the subject matter is heavy, particularly the end with video projections of throngs of hooded KKK members, it's a story that needs to be seen. As long as hate crimes and immigrant bashing are still happening, racial inequality is acceptable, and religion is used to justify hate, there's a need for theatre and art to shine a light in those dark corners, and make audiences think and feel again. Kudos to Her Story Theater for bringing this world premiere to life on stage. 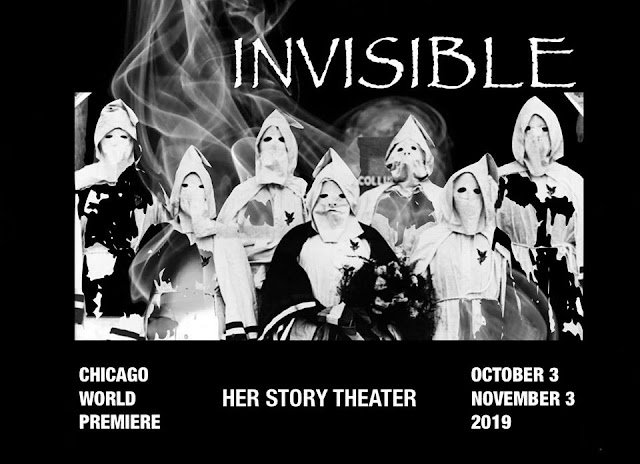 INVISIBLE imagines a woman in a small Mississippi town in 1925 who is forced to reconcile her involvement in the modern Women’s Ku Klux Klan movement with her religious beliefs and sense of decency. Wrapping their anti-immigrant mission in a cloak of patriotism following the passage of women’s suffrage, Mabel Carson’s neighbors have convinced her of the justness of their cause, but the arrival in town of a Chicago newspaper reporter just as their WKKK chapter is gaining momentum forces Mabel to question her beliefs. INVISIBLE is a powerful and suspenseful drama in the tradition of American southern-set narrative fiction.

In the 1920s in America, the Women's KKK came into being. By then Black Codes in the South were firmly in place; the oppression was profound and often violent. Unlike the Klans of the Reconstructionist Era and Civil Rights Movement who specifically targeted the African American community, this Klan turned its main attention toward Immigrants, Catholics and Jews.

Under the guise of an all welcoming flag of patriotism, they wrapped themselves up in Nationalism, Nativism and Purity -- 100% American. "America for Americans". The newly formed Women's Klan of that era fought their way to power after winning the women's right to vote. They infiltrated churches, schools, civic organizations and appealed to motherhood, the future and safety of children.

They were the inventors of "Poison Squads" who spread lies and destroyed reputations. If any of this reminds you of today's climate, come see this show and understand what we collectively inherited from this brief but impactful time in history. It was a movement that swept the nation. It was when the Klan went mainstream in America. While the plot and characters of INVISIBLE are imagined, the descriptions of the WKKK activities are accurate, and actual historical figures are mentioned as off-stage characters. 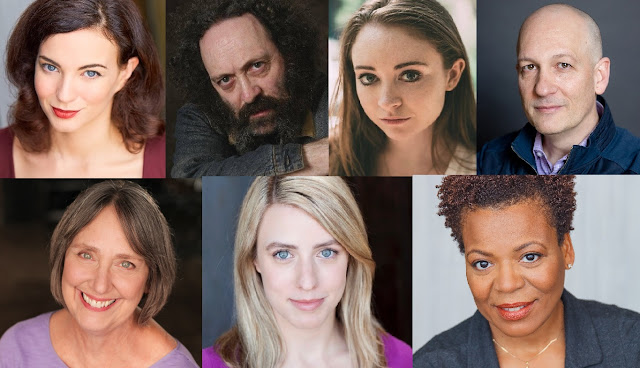 INVISIBLE was written by Her Story Theater’s Producing Artistic Director Mary Bonnett, author of the company’s earlier productions that comprised its “Chicago Sex Trafficking Cycle.” The cycle includes SHADOW TOWN, voted one of the 2013 “Ten Best Productions of the Year” by Chicago Theater Beat; THE JOHNS, MONEY MAKE ‘M’ SMILE for youth, and 2018’s breakout hit MONGER, of which the SUN TIMES said “It lands with a crushing (and factually supported) weight.”  SPLASH MAGAZINE gave it four stars, saying, “The Play’s action is mesmerizing; at a tightly crafted 75 minutes… it hits many nerves at once; anger, disbelief, compassion, fear and a desire to help.” BUZZ CENTER STAGE said “What I really want is for you to go see this play. This is something real.”

INVISIBLE will be directed by longtime Chicago director Cecilie Keenan, who earned raves for her direction of WEDDING BAND in 2017 for The Artistic Home. That production prompted Tony Adler, the then-theater editor of the READER to declare “ So praise the Lord, as one of its characters would certainly say, for the Artistic Home revival of Childress's WEDDING BAND.”

INVISIBLE will be the first HerStory Theater production to be eligible for Chicago's Jeff Awards.

HER STORY THEATER
Her Story Theater is a theater for social change. Through theater and the written word, our mission is to shine bright lights in dark places on women and children in need of social justice and community support.  Since 2011, we have partnered with countless organizations to raise awareness on current issues that impact women and children.

Sponsored by the Oppenheimer Family Foundation

Posted by Bonnie Kenaz-Mara at 2:13 PM No comments: