Chicago’s Las Guitarras de España will be collaborating with musician/composer Ronnie Malley for a truly multicultural show at City Winery on Monday, March 7. 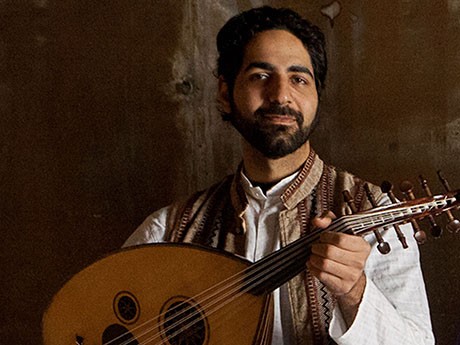 The collaboration will explore music from the shared cultural history of the Middle East, North Africa, and Spain. The special program will also feature flamenco and Indian dance with music from the ensemble Surabhi featuring Sara Ranganathan (veena), Chihsuan Yang (violin, erhu) and Carlo Basile (guitar) just returning from Shanghai, Taiwan, and Hanoi to explore music from the Silk Road tradition. Click HERE for full show details, and to purchase tickets.

Here at ChiIL Live Shows/ChiIL Mama, we've long been admirers of David Kersnar's works.   Check out our original video interview with him, during his collaboration on Goodnight Moon for Chicago Children's Theatre.

Now check out his latest collaboration in person:
World Premiere of THE SEVENTH LOVE
Harris Theater
One Night Only: November 2

Real life stories from Chicago women about love and relationships play a key role in the sound score of The Seventh Love, a work that explores the various aspects of love through dialogue, original music and powerful Bharata Natyam dance.

Natya Dance Theatre, Chicago’s critically-acclaimed and longest running dance company rooted in the Indian dance-theater technique of Bharata Natyam, returns to the Harris Theater with the World Premiere of The Seventh Love, an exploration of love in eastern teachings based on the life of the god Krishna.  The Seventh Love is conceived by Natya Associate Artistic Director Krithika Rajagopalan in collaboration with David Kersnar, a founding member of Chicago’s Tony Award®-winning Lookingglass Theatre, and is written and directed by Kersnar and choreographed by Natya Founder and Artistic Director Hema Rajagopalan.   Natya presents The Seventh Love in one performance only at the Harris Theater, 205 E. Randolph Street, Saturday, November 2 at 7:30 pm.

Following last year’s highly successful Sita Ram, an original world musical at the Harris Theater created by Kersnar, Krithika Rajagopalan, Josephine Lee of the Chicago Children’s Choir and composer Jai Uttal, Kersnar and Rajagopalan team up once again for The Seventh Love, a humorous dance drama revolving around the life of Krishna and understanding the various aspects of love.  Based on the ancient Buddhist discourse known as “The Five Aspects of Love” – which include attention, affection, acceptance, allowance and appreciation – Kersnar and Rajagopalan’s narrative story, brought to life through expressive dance and dialogue between a sage and a king, examines the various stories of Krishna’s life, from childhood through his adult relationships.  Through the lens of Krishna, the sage and the king seek to understand what true love really means and how a person can attain the sixth love, or “perfect love” encompassing all five aspects, before moving on to the seventh love, which is universal, selfless love.

Bringing a real life element to Kersnar and Rajagopalan’s story, the sound design includes true stories from Chicago women about their real-life relationships, ranging from anecdotes about arranged marriages and surviving domestic abuse to lessons learned from both successful and failed marriages.

Accompanied by original music from Rajkumar Bharathi, who also composed for Natya’s premiere of The Flowering Tree at the Harris Theater in 2011, and brilliant costumes designed by Ruknini Rajans and Krithika Rajagopalan, Hema Rajagopalan’s Bharata Natyam choreography – full of percussive footwork, symbolic hand gestures, fascinating geometry in movement and engaging facial expressions – uses 15 dancers to bring the story of The Seventh Love to life in a fresh, contemporary way that sheds new light on the ancient mysteries of love, life and human relationships.

Tickets
Tickets for The Seventh Love range from $24 to $75 and are available by calling the Harris Theater Box Office at 312-334-7777 or online atwww.harristheaterchicago.org.

About the Artists
Natya Dance Theatre was founded in 1975 by renowned dancer, choreographer and dance educator Hema Rajagopalan to serve as an agent of cultural preservation, presentation and exchange.  Natya seeks to sustain and develop the traditional art forms of India through the teaching and performance of Bharata Natyam for audiences of all backgrounds.  Bharata Natyam is a classical dance form of southern India that combines dynamic body movement with rhythmic footwork and stylized hand gestures and facial expressions.  Natya promotes the values of Indian culture, preserves an ancient art form, and forges links among Indian, American and other cultures.

Hema Rajagopalan (Artistic Director, Choreographer) is a Bharata Natyam dancer, teacher and choreographer of international repute.  She is the founder and Artistic Director of Natya Dance Theatre, a professional touring company and school that has specialized in Bharata Natyam for the past 38 years.  Her innovative work preserves Bharata Natyam in its full integrity, developing the art form in new directions and bringing it to diverse audiences all over the world.  Her gurus are some of the foremost figures in Bharata Natyam: Padma Shri K. N. Dandayudapani Pillai and Padma Bhushan Kalanidhi Narayanan theAbhinaya exponent.  She has performed as a soloist at prestigious venues throughout the world.  As a choreographer, she has created numerous short works and over thirty evening-length productions.  Noteworthy among her many prestigious awards are an Emmy® Award for the public TV production, World Stage Chicago, seven National Endowment for the Arts choreography awards in the U.S. (the highest number ever) and the Vishwa Kala Bharati award for artistic excellence in India.   She conducts workshops and master classes at colleges and universities throughout the country, and is an adjunct faculty member at the Dance Center of Columbia College Chicago.

Krithika Rajagopalan (Associate Artistic Director, Story Creator) has trained under Bharata Natyam masters, learning from world-renowned practitioners Hema Rajagopalan and Padma Bhushan Kalanidhi Narayanan.  Krithika also has trained in Kalari Payatu (Indian martial arts) and yoga.  She has given numerous solo performances and has had the honor of appearing for President Bill Clinton and at prestigious venues all over the world, including the Kennedy Center for the Performing Arts in Washington, DC; the Ravinia Festival; the Auditorium Theatre; the Kentucky Centre for the Arts; the Music and Dance Festival of Madras, India; and the National Centre for Performing Arts, Bombay, India.  She has choreographed sixteen full-length works.  In 2006, she performed as a soloist at Chicago’s Millennium Park with acclaimed cellist Yo-Yo Ma and the Silk Road Ensemble, and also performed with the Silk Road Ensemble at New York’s Rubin Museum.  In 2006, Krithika was the first Indian ever nominated for a Joseph Jefferson Award, an award that acknowledges outstanding achievement in Chicago theater.  Recognition of Krithika’s work includes the Chicago Dance Award, the Jerome Foundation Grant, the Master Teacher Award from the Illinois Arts Council, the Illinois Arts Council Fellowship, the Woman Warrior Award from Columbia College Chicago, and the Commitment to the Arts Award from Mayor Daley and the City of Chicago.

David Kersnar (Story Creator, Writer and Director) is a founding ensemble member of the Tony Award-winning Lookingglass Theatre Company and has performed, designed and directed with the company since it was founded in 1988.  Kersnar has also appeared with the Goodman, Steppenwolf and Remains Theatre in Chicago, the Brooklyn Academy of Music, The Actor’s Gang in Los Angeles, and the Touchstone Theatre of Pennsylvania.   Kersnar served as the Lookingglass Artistic Director from 1988 to 1990 and again from 1997 to 2000.  Kersnar founded and currently serves as one of the Master Teachers of the Lookingglass Education & Community Programs, and served as its Director from 1992 to 1997.  He has over 25 years of experience teaching residencies, camps and classes, including courses for Roosevelt University, DePaul University, University of Chicago, Northwestern University, residencies for children with special needs in Chicago area schools, and workshops for the Lookingglass Studio.  Kersnar recently directed Iphigenia 2.0 for Next Theatre and Pulcinella and Peter and the Wolf for Chicago Symphony Orchestra and Marisol, Old Times, and Some Girls for Northwestern University.  Other directing and writing credits include Popcorn and Pasquale for Chicago Lyric Opera, Goodnight Moon for Chicago Children’s Theatre, The Last Act Of Lilka Kadison, La Luna Muda for Lookingglass Theatre, Flying Griffin Circus for the Actor’s Gymnasium and Brundibar for Lookingglass in collaboration with Lively Arts, Chicago Children’s Choir and the Chicago Youth Symphony Orchestra.  Kersnar also co-wrote and directed the Lookingglass namesake production,Through the Looking Glass and several productions for the Lookingglass World Circus.

Rajkumar Bharathi (Composer) graduated as an electronics and telecommunications engineer from the prestigious Guindy College of Engineering, Chennai, but turned to music as a full time career after a short stint as an engineer.  He has given classical Carnatic music concerts all over India and has traveled widely to the U.S., Canada, U.K., Gulf countries, Sri Lanka, Singapore, Malaysia, Australia and New Zealand.  Bharathi has been involved in composing music for CD’s, thematic presentations, dance ballets and also for fusion projects.  He also has composed many Varnams, Thillanas and Padams especially for dance projects.  As the great grandson of the poet Mahakavi Subramanya Bharathi, he has tuned many of Bharathi’s lesser known compositions and presented them in the classical Carnatic forums.  Bharanthi was nominated for the prestigious Lester Horton Dance Award for Outstanding Achievement in Composing Music for Creation Myth, a dance ballet for the UCLA Centre for Performing Arts (University of California) in 1995.

For more information on Natya Dance Theatre and its programs, please visit www.natya.com.
Posted by Bonnie Kenaz-Mara at 12:02 PM No comments: