ACT OUT OPENING: Mud Blue Sky at A Red Orchid 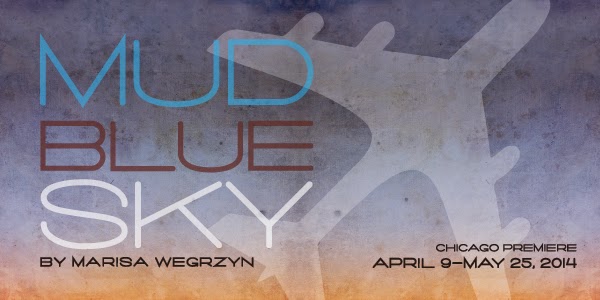 A high school pot dealer abandons his prom night to crash the hotel room reunion between three flight attendants (all old enough to be his mother). Booze is poured, herb is smoked, the room blurs and futures, careers, and kindness snap sharply into focus. We suggest that you keep your seat belt fastened throughout the performance, as you are certain to experience turbulence. Local Playwright Marisa Wegrzyn's profoundly compassionate and fiercely witty play makes its Chicago Premiere.

“Mud Blue Sky is both fierce and compassionate,” comments Artistic Director Kirsten Fitzgerald. “I find these two qualities at the core of Marisa’s work and am thrilled to be collaborating with her and with my fellow Orchids to bring it to Chicago. The previous work we have all done together allows us to challenge each other and the play all the more.”

Shade Murray (Director) directed Annie Baker’s The Aliens and Nick Jones’ Trevor at A Red Orchid as well as The Butcher of Baraboo, Abigail's Party (Jeff Nomination, Director) and Kimberly Akimbo.  He recently had the pleasure of directing Annie Bosh is Missing for Steppenwolf Theatre’s First Look.  Other credits include End Days at Next Theatre, The Chosen (Jeff Nomination, Director), The Subject Was Roses at Writers' Theatre, Fatty Arbuckle... at Second City, The Petrified Forest, The Good Soul of Szechuan, R.U.R., Marathon '33 (Jeff and After Dark Awards, ensemble), Detective Story (Jeff Award, Production, Director, Ensemble), WRLS #5, and Our Country's Good at Strawdog Theatre, Stupid Kids (Jeff Nomination, Director), Some Explicit Polaroids, Santaland Diaries, Never Swim Alone at Roadworks as well as productions at the MCA, Shattered Globe, About Face, Colbalt, Shakespeare's Motley Crew, Timberlake Playhouse and dance theatre in collaboration with MK and Birgitta Victorson. Shade is an MFA candidate in directing at Northwestern University, an associate artist with A Red Orchid and Strawdog Theatre Companies and has taught at Northwestern University, DePaul University, Act One Studios, National Louis University, National High School Institute, Piven Workshop and the Actor's Gym.

Kirsten Fitzgerald (Angie) is a member of the Artistic Ensemble at A Red Orchid and the current Artistic Director.  Her performances here at home include The Butcher of Baraboo, The New Electric Ballroom, Abigail's Party, The Sea Horse [Jeff Award], Pumpgirl, Weapon of Mass Impact, Mr. Bundy, The Killer and more. Other Chicago credits include Appropriate (Victory Gardens), Clybourne Park, The Elephant Man, and A Streetcar Named Desire (Steppenwolf Theatre); Major Barbara (Remy Bumppo); Romeo and Juliet (Chicago Shakespeare Theatre); Flaming Guns of the Purple Sage (Defiant Theatre);  A Moon for the Misbegotten (Circle Theatre) in addition to work with Next, Goodman, Shattered Globe, Famous Door, Plasticene and the Utah Shakespeare Festival among others. Kirsten teaches acting at DePaul University and Columbia College.  She can be seen on TV right now in Sirens (USA- Thursdays 9:00c) and has worked on Chicago Fire (NBC), ER (NBC) and Underemployed (MTV).

MIERKA GIRTEN (Sam) was last seen in Trevor and in Simpatico at A Red Orchid Theatre where she is an ensemble member. Off-Broadway, she was seen in Mistakes Were Made with Michael Shannon and Sam Deutsch, after doing the world premiere right here at home. Also at A Red Orchid: Abigail’s Party, Weapon of Mass Impact, The Meek, Kimberly Akimbo and The Treatment. Other Chicago credits include:  her one woman show With or Without Wings, The Walls at Rivendell Theatre Company, A View From The Bridge at ATC, The Book Of Liz with Roadworks, The Danube, Edmond, Marat Sade and A Blood Wedding with The Hypocrites, Into The Woods at Porchlight, Marathon 33 and Subterranean Love Story at Strawdog Theatre, in addition to work with Appletree, Circle Theatre, Livebait, Illinois Theatre Center, Provision, and Cobalt Ensemble.  Mierka toured the country in The Secret Garden and has been heard nationally, as an announcer and jingle singer on many radio and television commercials. Film credits include: The Manson Family, The Lake at Evening and The Drunk. Mierka is the founder of The Mookie Jam Foundation, benefiting artists with Multiple Sclerosis - because she is a daily warrior against the disease. Perseverance furthers.

Natalie West (Beth) is a member of the ensemble at A Red Orchid. She most recently appeared in Sons of the Prophet at American Theatre Company. Previous productions include Side Man (Steppenwolf), The Man Who Came to Dinner (Steppenwolf and The Barbican in London), House and Garden (Goodman), How I Learned to Drive (Northlight), God of Hell (Next), The Guys (Piven), and several shows with Remains Theatre where she was an ensemble member for many years. Natalie was a regular on the television show Roseanne as Crystal. Films include Nate and Margaret, Poker House, Life Sentence and Bushwhacked. Natalie is the recipient of three Jeff Awards for supporting actress for Butcher of Baraboo and Abigail's Party at A Red Orchid and Life and Limb at Wisdom Bridge. She holds a MSW from Loyola University Chicago and a BA in Theatre from Indiana University. She also attended Webber Douglas Drama Academy in London.

About A Red Orchid
Since 1993 A Red Orchid Theatre has been an artistic mainstay of the Chicago theatre community; known and praised for its powerful ensemble, creative design and its gripping, intimate productions.  It was named Best Theatre of 2010 by Chicago Magazine. The resident Ensemble maintains the conviction that live theatre is the greatest sustenance for the human spirit, and the 2013-2014 subscription season promises to bring Ensemble and audience even closer together.