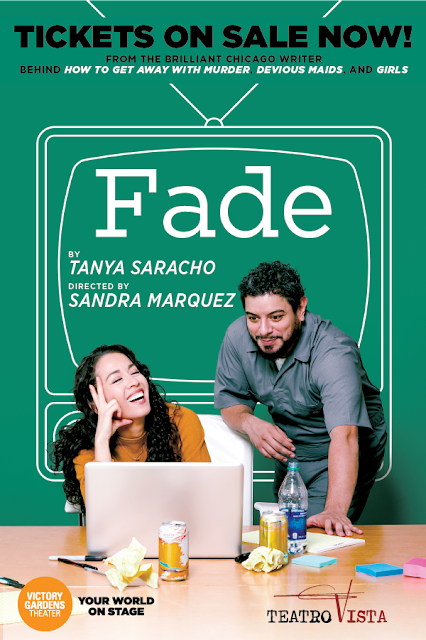 Tonight, ChiIL Live Shows will be ChiILin' at Chi, IL's Victory Gardens Theater for the press opening of Fade, a co – production with Teatro Vista, written by Tanya Saracho and directed by Sandra Marquez. We love it when our favorites play well together and we've enjoyed Victory Gardens and Teatro Vista's thought provoking productions for years. Can't wait to catch this collaboration. Check back soon for our full review.

About the Artists
Tanya Saracho (Playwright) was born in Los Mochis, Sinaloa, México. She is a playwright and Television writer who’s worked on How To Get Away With Murder, HBO’s Looking, Girls, and Devious Maids. Named “Best New Playwright” by Chicago Magazine in 2010, Saracho has had plays produced at: Primary Stages in NYC, 2nd Stage in NYC, Denver Theatre Center, Oregon Shakespeare Festival, The Goodman Theater, Steppenwolf Theater, Teatro Vista, Teatro Luna, Fountain Theater, Clubbed Thumb, NEXT Theater and 16th Street Theater. Saracho was named one of nine national Latino “Luminarios” by Café magazine and given the first “Revolucionario” Award in Theater by the National Museum of Mexican Art. She is the founder of Teatro Luna (the first all-Latina Theatre Company in the nation) as well as the founder of ALTA (Alliance of Latino Theatre Artists). She is currently in development STARZ and Big Beach Films and under commission with:  South Coast Repertory Theatre and Two Rivers Theatre. Tanya is proud SAG/AFTRA actor.

Sandra Marquez (Director) is an educator, actor and director who has worked at many theaters in Chicago and beyond including The Goodman Theater, Steppenwolf Theater, Victory Gardens, the Oregon Shakespeare Festival, Madison Repertory, Second Stage Theater in New York and the Getty Villa in CA. She is a longtime and proud member of Teatro Vista where she received a Jeff Award for her performance in A View from the Bridge by Arthur Miller, and in 2016 she was thrilled to join the esteemed Steppenwolf Theater Company ensemble. Her film and TV credits include Chicago Med, Chicago Justice and Boss. She enjoys teaching and mentoring young people at Northwestern University where she is on the acting faculty.

Eddie Martinez (Abel) is an ensemble member of Teatro Vista in Chicago where he has been seen in Parachute Man and In the Time of the Butterflies among others. Select credits include: Fade (Denver Center, Cherry Lane, and TheaterWorks), Big Lake Big City, Cascabel (Lookinglass Theater); Our Lady of 121st Street(Steppenwolf); and Romeo y Julieta (Chicago Shakespeare Theater. Film/TV credits include: Sense8 (Netflix), Sirens (USA Network), Chicago Fire (NBC) and The Dilemma (Ron Howard). Eddie studied at Columbia College in Chicago.

Victory Gardens has partnered with mobile theater ticketing app TodayTix to offer free tickets for the first preview of Fade. Free Tickets will be available via TodayTix mobile lottery, launching one week before the first preview on Friday, October 27, 2017. Winners will be notified by email and push notification between 12:00pm and 3:00pm on the day of the first preview, Saturday, November 4, 2017.

Performances are at the Victory Gardens Theater, 2433 N Lincoln Avenue, in the heart of Chicago's Lincoln Park neighborhood.

Public Programs
Public Programs is an event series designed to enhance your experience by exploring themes and issues within Victory Gardens Theater’s productions. Connecting our theater to the world beyond the stage and rehearsal room, Public Programs bridge ideas, provoke dialogue, and deepen the relationship between our audiences and our productions.

A full and updated schedule of special events, post-show discussions, and presentations centered on performances of Fade is available at www.victorygardens.org . All events are free unless otherwise noted. For more information, call 773.871.3000 or visit the Victory Gardens website.

PASS/FAIL?
Post-Show Town Hall November 7 | Tuesday | 9:30 p.m.
In Fade, Lucia is white-passing: she is Mexican, but you wouldn’t know it by looking at her. Many people hold identities that lie underneath the surface in race, ethnicity, sexuality, ability. Still others wear their identities conspicuously on the outside. Join us after tonight’s performance of Fade for a town hall conversation challenging assumptions and breaking open the concept of passing.

A CONVERSATION WITH TANYA Y SANDRA
Post-Show Conversation  November 11 | Thursday | 9:30 p.m.
For decades, playwright Tanya Saracho and director Sandra Marquez have developed trust and friendship through their work together, collaborating as playwright-director and as playwright-actor. Join Tanya and Sandra as they give you an exclusive look into their collaboration over the years.

COLLEGE NIGHT: YES SHE CAN
Free Post-Show Performance November 16 | Thursday | 9:30 p.m.
Women made up just 29% of TV’s screenwriters and just 20% of Broadway’s playwrights last year. Latina writers are scarcely recognized in this field and as successful screenwriter and Fade playwright Tanya Saracho proves, it’s not for lack of skill. Join us for a pre-show celebration in the lobby with free drinks and pizza. Then, stick around after tonight’s performance of Fade for free post-show scenes written by collegiate Latinas and directed and performed by their peers from DePaul University, Loyola University, Northwestern University, and Columbia College.

SHADES OF FADE
Free Pre-Show Performance December 1 | Friday | 5:30 p.m.
For a hilarious play about a woman screenwriter, Fade as a title holds a myriad of literal and symbolic meanings. What lies beneath the surface? Join dynamic Latinx spoken word poets from across Chicago for a free pre-show performance as they respond to the word FADE and what it means for them in their lives and in their work.

ENTER THE WRITERS’ ROOM
Off-Night Conversation December 4 | Monday | 6:30 p.m.
More and more, television showrunners and producers are looking for a playwrights’ touch in creating new shows. Programs like House of Cards, How to Get Away with Murder, The Exorcist, American Crime, and many more have working playwrights at the helm. What is the relationship between plays and the screen? How do writers navigate these worlds? Join Chicago-based playwrights and television writers in this off-night conversation event breaking down the realities of writing for the stage vs writing for the screen.

About Teatro Vista
Teatro Vista produces, develops and commissions plays that explore the wealth and variety of the human experience from a Latinx perspective. The company provides work and professional advancement opportunities for Latinx theater artists, with special emphasis on the company’s ensemble members, and seeks to enhance the curricular goals of Chicago students through theatre. Teatro Vista was recently celebrated as one of “Chicago’s Cultural Leaders” by the Arts & Business Council of Chicago and received the League of Chicago Theatre’s Artistic Leadership Award.
Teatro Vista is supported by The Joyce Foundation, the Chicago Community Trust, Alphawood Foundation, Paul M. Angell Family Foundation, The MacArthur Fund for Arts & Culture at the Richard H. Driehaus Foundation, Bloomberg Philanthropies, the Department of Cultural Affairs and Special Events of the City of Chicago, The Shubert Foundation, The Gaylord and Dorothy Donnelly Foundation, the Chicago Latino Theater Alliance and The Saints.
For more information, visit TeatroVista.org, on Twitter (@TeatroVista), Facebook and Instagram.
Posted by Bonnie Kenaz-Mara at 2:02 PM No comments: