OPENING: Skin For Skin at Rivendell Theatre Via The Agency Theater

THE AGENCY THEATER COLLECTIVE PRESENTS
THE WORLD PREMIERE OF
SKIN FOR SKIN,
WRITTEN BY PAUL PASULKA AND DIRECTED BY MICHAEL MENENDIAN,
FEBRUARY 28 – APRIL 2 AT RIVENDELL THEATRE 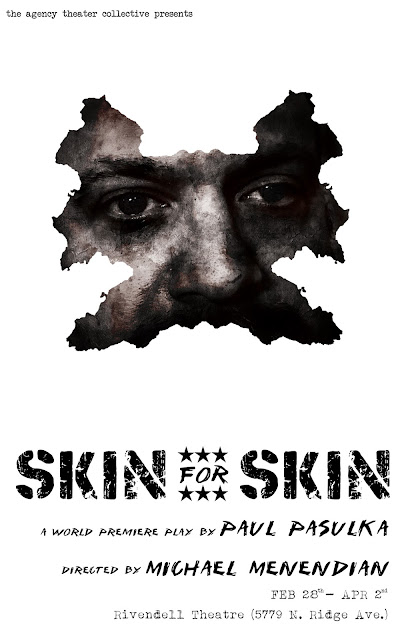 ChiIL Live Shows will be there for the opening so check back after 3/4 for our full review.

The Agency Theater Collective is pleased to announce its spring production of the world premiere of Skin For Skin, written by Paul Pasulka and directed by Michael Menendian, February 28  – April 2, at the Rivendell Theatre, 5779 N. Ridge Ave. Previews are Wednesday, Feb. 28 – Friday, March 3 at 7:30 p.m. Opening night is Saturday, March 4 at 7:30 p.m. (press are also invited to the final preview, Friday, March 3 at 7:30 p.m.) The performance schedule is Thursdays - Saturdays at 7:30 p.m. and Sundays at 3 p.m. The running time is 90 minutes, without intermission. Ticket prices for previews are $20 and for the regular run $28.  For more information and to purchase tickets, please visit WeAreTheAgency.org or call 773.680.4596.

Skin for Skin depicts the biblical Job as a Muslim-American contractor in Baghdad who is suspected of aiding Al-Qaeda. He is imprisoned in an Abu Ghraib-type ‘black site’ and subjected to ‘enhanced interrogation’ as supervised by an American psychologist. The play explores the unintended consequences of torture in the name of God, country and money. Skin for Skin, originally read at Chicago Dramatists, features choreography from members of Chicago Danztheatre Ensemble and Actors Gymnasium.

ABOUT PAUL PASULKA, playwright
Paul Pasulka is a Chicago playwright and a clinical psychologist in private practice and on faculty at Northwestern University School of Medicine. His plays have been produced and read throughout Chicago and in New York. La Maestra, the story of Renaissance painter Artemisia Gentileschi, received a staged reading with dance, movement and song at Chicago DanzTheatre Ensemble in June 2016 and is scheduled for production in its 2017-18 season.  Gruoch, or Lady Macbeth  was produced by Death and Pretzels in 2015.  When the Levee Breaks was produced as part of The Best of the 10's at Chicago Dramatists and Second City Theatre and was selected as a finalist and for publication at Secret Theatre in New York. Dark Angels was performed at the American Theatre Company (ATC) and Roberto Clemente High School in ATC’s Bridge Program. He has worked with Adventure Stage Theatre in assisting middle school students in writing plays for Young Playwrights for Change. He presented "Neuropsychology, Creativity, and Storytelling" at the Steel Pen Creative Writers' Conference in 2015. He has presented autobiographical stories throughout Chicago, including at Rhinofest and with the GenNarrations Project of The Goodman Theatre, and was invited to read at The International Storytelling Festival in San Miguel Allende, Mexico in 2014.

ABOUT MICHAEL MENENDIAN, director
Michael Menendian is a founding member and the producing artistic director of Raven Theatre, where he has directed and designed sets for many productions, earning numerous Joseph Jefferson and After Dark awards. Along with JoAnn Montemurro, Menendian received a 2007/2008 Jeff Award for Outstanding Contribution to Chicago Theatre and he recently received a 2016 Jeff nomination for his direction of Raven's Direct From Death Row the Scottsboro Boys, which earned a Jeff Award for Outstanding Ensemble. Other local directing credits include productions at Victory Gardens, Chicago Dramatists and Lake Forest College,

ABOUT THE AGENCY THEATER COLLECTIVE
Founded in 2010, The Agency Theater Collective creates relevant, authentic work with a focus on new or rarely produced plays. Past productions include Mia McCullough’s Chagrin Falls this fall at The Den Theatre, Copi’s Four Twins, Clifford Odets’ Paradise Lost, Out of Tune Confessional, I Wish to Apologize to the People of Illinois, At the Center, Truth in Context (Non-Equity Jeff Award nominee for Best New Work in 2015/2016) and The Spirit of ’76. The Agency also hosts “No Shame Theatre,” a weekly theatrical open mic, every Saturday night at The Lincoln Loft. The Agency Theater Collective hold the follow principles sacred: revelation, paradox, humor, mischief and collaboration.

Posted by Bonnie Kenaz-Mara at 10:37 AM No comments: