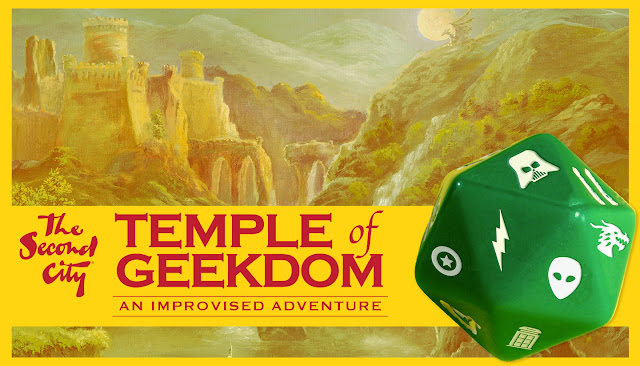 The Second City is excited to announce its new fully improvised show The Second City’s Temple of Geekdom: An Improvised Adventure. This “choose your own adventure” experience allows the audience to guide a party of improv adventurers and fracture their favorite fandoms in search of comedic gold. The show is directed by Second City alumnus and resident director Anthony LeBlanc and will be performed by a rotating cast of The Second City’s sharpest, geekiest, and most intergalactically fluent improvisers.

The Second City’s Temple of Geekdom: An Improvised Adventure puts the audience in the driver’s seat as the cast sets off on this live-action role-playing game. At each step of the story, the audience will decide which into which universe the team will venture next—and which fandom they want to explore. With geeked-out custom improv games like “Super Heroes,” “Star Trek Away Team,” and “Dungeons & Tag-Ins,” this show promises no fan, stan, cosplayer, or even (gasp) Slytherin will be left behind.

“Since playing the Star Wars character ‘Mace Windu’ in my very first show in Chicago, it has long been my dream to bring a show like this to The Second City. We’re taking the very best of what improv has to offer and pairing it with all the Easter eggs, deep cuts, and references that everyone will appreciate--from the most discerning pop culture fanatics to merciless, mutated Daleks,” says LeBlanc, who performed with Star Wars stalwart Warwick Davis last year in The Second City and Lucasfilm’s Rogue Pun: A Star Wars Show during Chicago’s Star Wars Celebration weekend.

The Second City’s Temple of Geekdom: An Improvised Adventure teleports into UP Comedy Club (230 W. North Avenue) February 24-May 25 on Mondays at 8 PM with an additional weekend run during C2E2 weekend, February 28-February 29. Tickets start at $18.00 and are available by phone at 312-337-3992 or online at www.secondcity.com.

About The Second City
Since opening its doors as a small cabaret theater in 1959, The Second City has grown into an entertainment empire. With sold-out shows playing 7 days a week on 10 stages in Chicago and Toronto, Second City’s Touring and Theatrical companies entertain an additional 1 million theatergoers a year around the globe. The Second City Training Center is the largest school of improvisation-based arts on the planet, with locations in Chicago, Toronto and Los Angeles that serve 11,000 students annually. In 2016, the Harold Ramis Film launched, becoming the world’s only film school dedicated to comedy. Second City Works, the B2B side of Second City, has brought award-winning improvisation and audience-driven techniques to over 600 Fortune 1000 companies, challenging businesses seeking a more collaborative culture to innovate through development programs, original digital and video content, campaign consultation, private events, and more. Second City Entertainment’s foray into television and media continues to produce new content and programming, including two-time Emmy winner SCTV and the upcoming Martin Scorsese-helmed Netflix documentary exploring the iconic series’ enduring legacy.