ChiIL Live Shows--Black Tusk-headliners at Ultra Lounge last March
Today's the day.   We gave you the heads up about both line ups weeks ago, but this is it.  ChiIL Live Shows will be catching up with Municipal Waste and Black Tusk for Video Interviews and we'll be shooting stills at their sets at Reggies.   Click here for tickets and all the details.
18+
7pm
$15 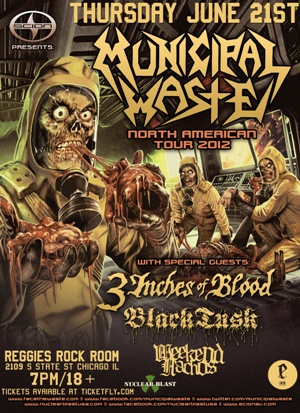 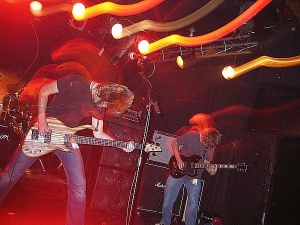 photo credit-Empty Bottle site
Then if we can still make it over to Empty Bottle, we plan to catch the end of:

ChiIL Live Shows--Black Tusk with Thou opening for Monstro at Ultra Lounge last November-Click here
Posted by Bonnie Kenaz-Mara at 6:34 AM No comments:

Black Tusk, Thou and Monstro

November's been so crazy busy, we're still catching up with the recaps.   Ultra Lounge is a sweet space.   Get over there if you haven't checked it out yet.   Black Tusk and Monstro murder it in smaller venues.   Catch 'em now before you're stuck at the back of an arena and all you can see are the back tats of the bearded 6'5" metal head in front of you.

Apologies for the flash, guys.   I know there were a bunch of photographers flashing, but I've never had to before.  But Ultra Lounge was ultra murky and too dark to get anything at all, otherwise, and I tried.

Emerging onto the metal scene from Savannah, GA in 2005, Black Tusk specialize in a brand of sludgy metal they call "swamp metal." The band, consisting of members Andrew (guitar/vocals), Athon (bass/vocals), and James (drums/vocals), combines the drive of fellow Savannah residents Baroness with the thick and murky stoner sludge of High on Fire.

In 2005 the band self-released its first demo, Demos and the Demons, as well as the album When Kingdoms Fall, which was released on Wrecked Signal. Two years later they self-released another album, The Fallen Kingdom, and kept their prolific release schedule going the following year with Passage Through Purgatory, released on Hyperrealist Records. Taking what for them is a long break from recording, Black Tusk gained attention through tours with bands like Weedeater, Pentagram, and Eyehategod. The band eventually signed on to Relapse, and in 2010 released its first album through the label, Taste the Sin, featuring cover art from Baroness singer John Baizley. ~ Gregory Heaney, Rovi.

BLACK TUSK is offering a free download of the track "Set the Dial to Your Doom" exclusively at RCRD LBL. The download comes from their brand new album Set the Dial which saw an October 24th release via Relapse Records.

BLACK TUSK is touring in December throughout the Southern U.S..  Support on these shows will come from MonstrO and Kyng.

BLACK TUSK is currently streaming Set The Dial at this location. The album is available for purchase via Relapse.com and iTunes.

Posted by Bonnie Kenaz-Mara at 12:58 PM No comments: