The run time is 1:45, including intermission

“Why the hell didn’t we write this show?” asked my sister when I explained the premise. Two young people in World War ll, a Jewish doctor witnessing the horrors of battle and an aspiring actress/dancer trying to get her big break onto Broadway, begin a letter-writing correspondence at the encouragement of their fathers who knew each other in the old country. Our mom was a WWll Army nurse who cared for our dad when he got deathly ill with spinal meningitis, and they began a correspondence when she shipped out from the States. Our dad always said their romance was indebted to the U.S. Army Mail System. (Unlike Ludwig’s parents, whose mom destroyed their letters, our family still has our Dad’s. We gave his Army story letters to my son who is a Social Studies teacher.) 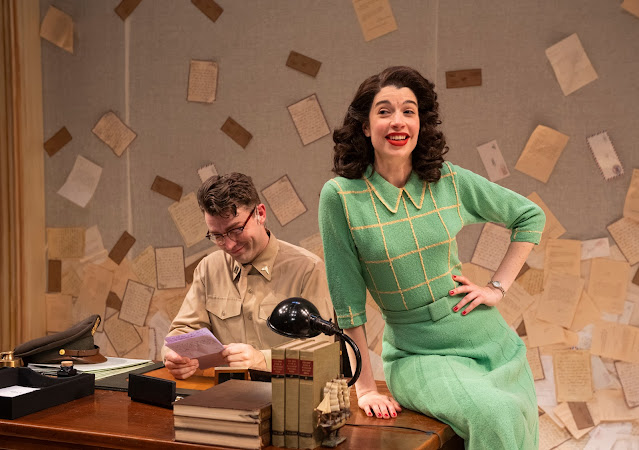 The cast is Casey Hoekstra (Jack) and Sarah Price (Louise). All Production Photos by Michael Brosilow

“Dear Jack, Dear Louise” is a charmer. From the initial letter in 1942 when their dads suggest they “get acquainted in a social way,” we get to know these two young people just as they get to know each other through their letters. Initially, Jack is stationed in Oregon, and Louise is in NYC. We cheer for their budding romance and the hope that they finally get to meet in person and overcome the huge obstacles in their way. 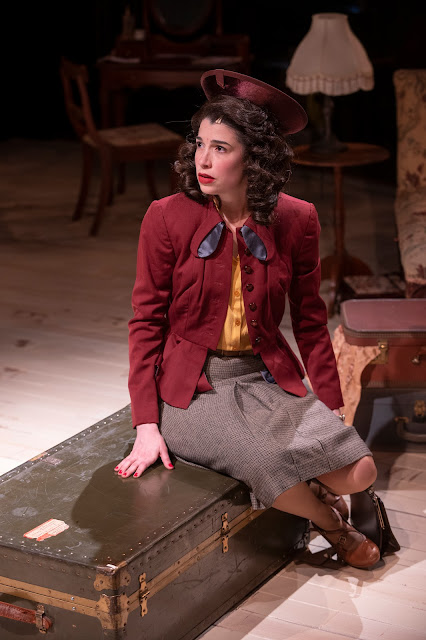 But we know that they do, because their future son is the playwright. 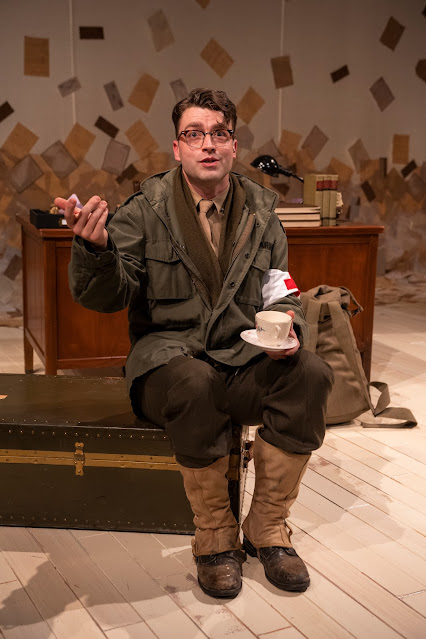 Both Casey Hoekstra as Jack and Sarah Price as Louise are wonderful. Jack is reserved; he oversees amputations and skin grafts on a regular basis in his grueling work. Sarah is upbeat, sassy, ambitious, and swears a lot when she’s mad. These penpals blossom from friends to a deep caring for each other. By the time they meet in person, they know each other deeply through their words, which seems quaint but a lot more “real” than the Internet dating of modern times. When there is a lull in their literary conversation because of career interruptions or other priorities, the patience they have to practice seems unfathomable to us in the world of texting and instant messages.

I loved all the time period references. Louise is auditioning for “Arsenic and Old Lace” on Broadway. She adores a production of “Oklahoma!” starring Celeste Holm as Ado Annie. Her favorite performers are Ethel Merman, Ginger Rogers, Katharine Hepburn, and Rosalind Russell. Louise’s costumes by Izumi Inaba evoke the flattering styles of the 1940’s. And the fun soundtrack includes “Night and Day” by Cole Porter, “For Me and My Gal,” and “It Had to Be You.”

I assumed that Ludwig borrowed and pieced together sections of his parents’ letters, but he had to create all the dialog from scratch. Since his mother must have felt the letters were too “intimate,” she didn’t save them for her sons. Knowing this background fact makes Ludwig’s entertaining script all the more impressive. The two characters interact through their letters without actually interacting together. I wondered how this was going to work theatrically, (would it just be a lot of back and forth letter reading like a vocal tennis game?), but it does so beautifully.

One other factual aspect of the backstory is that Jack’s mother was one of 13 girls, so Jack had 12 aunts! Louise goes to Pennsylvania from New York to meet the family, which results in her brave recap of facing a dozen potential critics. Louise describes Jack’s family as appearing “out of a Norman Rockwell painting if Norman Rockwell painted Jews.”

At our parents’ 50th wedding anniversary party, Dad gave an awesome speech where he said our mom “took special care of me because she told me later,’I didn’t want you to die on my watch.’ And she’s still taking care of me because I am not dead yet!”

Luckily, for my six siblings and I, and for Ken Ludwig and his brother, that military postal service was efficient and reliable! None of us would be here if it wasn’t for the powerful correspondence between Paul and Mildred and for Jack and Louise.

Catherine Hellmann is the youngest of seven children and a teacher like her dad. (But he had the GI Bill to pay for college.) Her kids are teachers and a librarian, so apparently this literary stuff is hereditary.

When two strangers meet by letter during World War II, a love story begins. U.S. Army Captain Jack Ludwig, a military doctor stationed in Oregon, begins writing to Louise Rabiner, an aspiring actress and dancer in New York City, hoping to meet her someday if the war will allow. But as the war continues, it threatens to end their relationship before it even starts.

**A reminder that masks are required at all times at the theater.  Safety protocols are available here: https://northlight.org/health-safety/**

Northlight Theatre is located at the North Shore Center for the Performing Arts, 9501 Skokie Blvd, Skokie

Student tickets are $15, any performance (subject to availability) 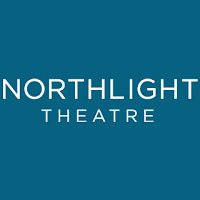 Founded in 1974, the organization has mounted over 220 productions, including more than 40 world premieres. Northlight has earned 208 Joseph Jefferson Award nominations and 36 Awards, as well as ten Edgerton Foundation for New Play Awards. As one of the area’s premier theatre companies, Northlight is a regional magnet for critical and professional acclaim, as well as talent of the highest quality. 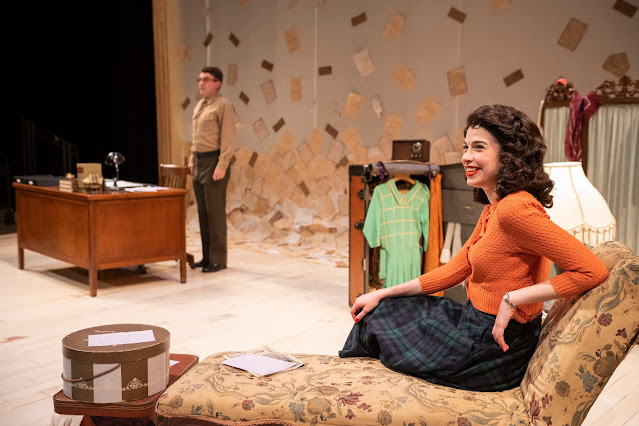 Posted by Bonnie Kenaz-Mara at 5:20 PM No comments: