OPENING: BILLY ELLIOT THE MUSICAL VIA PORCHLIGHT MUSIC THEATRE AT THE RUTH PAGE CENTER FOR THE ARTS

PORCHLIGHT MUSIC THEATRE ANNOUNCES THE CAST AND CREATIVE TEAM FOR
BILLY ELLIOT THE MUSICAL,
OCTOBER 6 – NOVEMBER 19 AT THE RUTH PAGE CENTER FOR THE ARTS 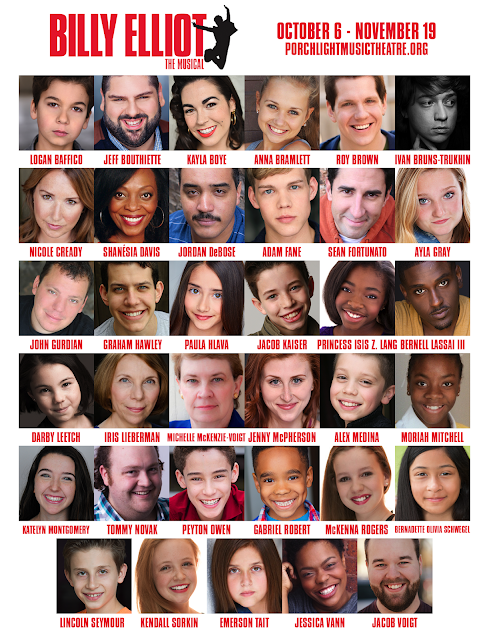 Here at ChiIL Live Shows we're long time admirers of the fantastic productions Chicago's Porchlight Music Theatre mounts each season. Years ago we reviewed the Broadway touring production of BILLY ELLIOT THE MUSICAL, and we can't wait to see Porchlight's take on this terrific tale of nonconformity, following your dreams, and a town in economic crisis backing an unlikely hero. With a score by Elton John this is sure to be a crowd pleaser.

Billy Elliot the Musical is based on the 2000 film “Billy Elliot” and features music by Elton John with book and lyrics by the film’s screenplay writer Lee Hall. Winner of both the Tony Award and Olivier Award for Best Musical, Billy Elliot the Musical is an inspirational story set in an English mining town during the miners’ strike of 1984-85. Billy Elliot takes a journey from the boxing ring to a ballet class to make his dreams come true while challenging the long held beliefs of his hometown. Along the way, he discovers a passion for dance that unites his family, inspires his community and changes his life forever.

ABOUT BRENDA DIDIER, DIRECTOR/CHOREOGRAPHER
Brenda Didier, a Porchlight Music Theatre artistic associate, returns to Porchlight where she last directed and choreograhed In The Heights and the award-winning Dreamgirls. Didier is a multiple Jeff Award recipient in both direction and choreography, and the recipient of After Dark Awards, BroadwayWorld awards and the National Youth Theatre award. She is the proud owner and artistic director of the Lincolnshire Academy of Dance, celebrating its 20th season. Other credits include work at the Goodman, Chicago Shakespeare, Second City, Theatre at the Center, BoHo, Mercury Theatre Chicago, Theo Ubique Cabaret Theatre, Stage Left, Six Flags Great America, Busch Gardens Virginia, Cirque Shanghai at Navy Pier, T-Mobile’s national commercial “Home for the Holidays,” The Kenny Rogers Christmas Tour and the University of Illinois, University of Wisconsin and Carthage College.

ABOUT CRAIG V. MILLER, ASSOCIATE CHOREOGRAPHER
Craig V. Miller returns to Porchlight Music Theatre where he choreographed the Porchlight Revisits production Little Me and was the assistant choreographer for the Jeff Award-winning Ain’t Misbehavin’. As a guest artist, he has performed with the Civic Ballet of Chicago’s production of The Nutcracker, Esoteric Dance Project, Dance in the Parks, and Chicago Dance Crash. Additional choreography credits include: The Color Purple at Mercury Theater Chicago where he was the associate choreographer and won the Broadway World Award-Best Choreography in a Musical and Carl Neilsen’s Maskarade (Vox3 Collective, choreographer). His work has also been presented at Dance Chicago, Dance Chance and Chicago Freelance Dance.

ABOUT LINDA MADONIA, MUSIC DIRECTOR/CONDUCTOR/PIANIST
Linda Madonia is a Porchlight Music Theatre artistic associate and has previously worked with Porchlight on Porchlight Revisits Little Me, A Funny Thing Happened on the Way to the Forum and Double Trouble. As a music director and conductor in the Chicago area for more than 30 years, Linda Madonia’s recent credits include Mary Poppins and I Left My Heart: A Salute to the Music of Tony Bennett at The Mercury Theatre. Other credits include Grand Hotel and Nunsensations at Drury Lane Water Tower Place, and A Chorus Line, She Loves Me and Me and My Girl at Theatre at the Center and The Man Who Murdered Sherlock Holmes at Mercury Theatre Chicago. For the past nine years, Linda has been the music director for Chicago’s Equity Joseph Jefferson Awards. Madonia also owns American Eagle Productions, a touring theater company that takes shows and workshops directly into schools. American Eagle has been doing shows for twenty-four years and presents 250 shows a year to Chicago area schools.

ABOUT SEAN FORTUNATO, “DAD”
Sean Fortunato makes his Porchlight Music Theatre debut with this production. His recent credits include Cabaret at Theatre at the Center and Death of a Streetcar Named Virginia Woolf: A Parody at Writers Theatre. Other credits includeThe Diary of Anne Frank, Hedda Gabler, The Real Thing, Rosencrantz and Guildenstern are Dead, Travels with My Aunt, The Chosen, Incident at Vichy, A Phoenix Too Frequent, Richard II, Rough Crossing, Spite for Spite (Writers Theatre), 2666, Measure for Measure (Goodman Theatre), Spamalot, The Producers (Theatre at the Center), Pericles, Cyrano De Bergerac, School for Lies, Sunday in the Park with George and Timon of Athens (Chicago Shakespeare Theater), “Rene Gallimard” in M. Butterfly (Court Theatre), “Detective Cioffi” in Curtains (Drury Lane Theatre) and work at Northlight Theatre, TimeLine Theatre Company, Remy Bumppo Theatre Company, About Face Theatre, Marriott Theatre, Next Theatre and First Folio Theatre. Regional credits include Intiman Theatre (WA), The Old Globe (CA), The Duke on 42nd (NY) and twelve seasons with Peninsula Players (WI), where he played “George” in Sunday in the Park with George. His film amd TV credits include The Merry Gentleman directed by Michael Keaton and Chicago PD. Fortunato has received four Joseph Jefferson Award nominations and an After Dark Award.

ABOUT PORCHLIGHT MUSIC THEATRE
Porchlight Music Theatre, now in its 23rd season, is nationally recognized for developing innovative new works, reimagining classic productions and showcasing musical theatre’s noted veterans and rising stars. Porchlight elevates the genre in Chicago by providing intimate and powerful theatrical experiences for its growing and diverse audiences. With the vision of Artistic Director Michael Weber, Porchlight builds on its role as Chicago’s only Equity not-for-profit company exclusively specializing in music theatre. Porchlight’s rich history includes the staging of more than 60 productions with 15 Chicago premieres and five world premieres. Through Porchlight’s “Off the Porch” new works program, the musicals of the next generation are developed and given a first audience. The School at Porchlight is Chicago’s center for music theatre training in the areas of performance, writing and appreciation including the launch of a youth Summer Camp in 2017. The company’s many accolades include 17 Black Theatre Alliance nominations and three awards, as well as a total of 126 Joseph Jefferson Award nominations resulting in 39 Jeff Awards including four consecutive Best Production awards for Dreamgirls (2016), Sondheim on Sondheim (2015), Ain’t Misbehavin’ (2014) and A Class Act (2013).

Porchlight Music Theatre is partially supported by generous contributions from the Actors’ Equity Foundation,  the Bloomberg Philanthropies, Chapman | Spingola, Attorneys at Law, the Elizabeth F. Cheney Foundation, Cooper’s: A Neighborhood Eatery, the Gaylord & Dorothy Donnelley Foundation, James P. and Brenda S. Grusecki Family Foundation, the MacArthur Fund for Arts & Culture at the Prince Foundation, The Saints, the Service Club of Chicago, and the Topfer Family Foundation. The season program is partially supported by a grant from the Illinois Arts Council Agency, a state agency and by a CityArts Grant from the City of Chicago Department of Cultural Affairs & Special Events.

Posted by Bonnie Kenaz-Mara at 5:25 PM