Back by Popular Demand!
Hell in a Handbag Productions Presents the Holiday Hit
RUDOLPH THE RED-HOSED REINDEER 2017
By David Cerda 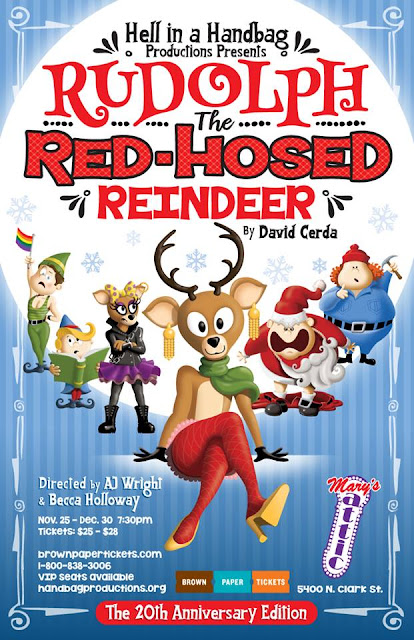 Hell in a Handbag Productions is pleased to conclude its 15th Anniversary Season with its most popular show ever: the holiday hit RUDOLPH THE RED-HOSED REINDEER 2017 by David Cerda*, co-directed by Becca Holloway and AJ Wright*. Handbag’s irreverent parody of the 1967 Rankin Bass children’s television special will play November 25 – December 30, 2017 at Mary’s Attic, 5400 N. Clark St. in Chicago’s Andersonville neighborhood. Tickets are on currently available at www.handbagproductions.org (through Brown Paper Tickets) or by calling (800) 838-3006.

Chicago’s favorite cross-dressing reindeer is back and he’s 20 years old! RUDOLPH THE RED-HOSED REINDEER had its first reading in 1996 and has evolved into one of Chicago’s most popular anti-holiday, holiday shows. Join Rudolph and all of his misfit friends as they struggle with fitting in and being ‘normal’ in an increasingly abnormal world. Playwright David Cerda* always adjusts the show to fit the current social climate.

David Cerda (Playwright) is the Jeff Award winning co-founder and Artistic Director of Hell in a Handbag Productions. He has written and appeared in POSEIDON! An Upside Down Musical (Jeff Recommended), The Birds, Rudolph the Red-Hosed Reindeer, SCARRIE The Musical, Caged Dames (Jeff Recommended), Lady X, How Whatever Happened to Baby Jane Happened, TROGG! A Rock and Roll Musical, Christmas Dearest (Jeff Recommended), Scream, Queen! SCREAM!, The Rip Nelson Halloween Spooktacular, Sexy Baby (Jeff Award Nomination – Best New Work), Lady X: The Musical (Jeff Recommended) and his new hit, The Golden Girls: The Lost Episodes. His plays have been produced around the country. He has also worked as a songwriter/lyricist with Amazon Films on an animated project and as an actor with various theater companies throughout the city of Chicago. Cerda was recently inducted into the Chicago Gay and Lesbian Hall of Fame for his contributions to Chicago theatre.

Becca Holloway (Co-Director) is thrilled to be working with Hell in a Handbag again after assistant directing Bewildered this past fall. Directing credits include: 44 Plays for 44 Presidents (Oil Lamp Theatre) and Buried in the Bahamas (Artistic Home). Becca has also had opportunities to work around Chicago and surrounding areas with: The Comrades, Refuge Theatre Project and Big Noise Theater. Stay tuned for her choreography in Brown Paper Box Co.'s Speech and Debate this February.

AJ Wright (Co-Director) is a proud ensemble member with Hell in a Handbag Productions. Directing credits with Handbag include: Caged Dames (Jeff Recommended), Christmas Dearest (Jeff Recommended), and Rudolph the Red-Hosed Reindeer (2011 & 2012). Around Chicago, AJ has also had the pleasure of directing/assistant directing with Kokandy Productions, Pride Films and Plays and Waltzing Mechanics.  You may also recognize AJ from his work as an actor in Handbag’s Bewildered (Darrin G), The Golden Girls: The Lost Episodes (Blanche), Rip Nelson’s Holiday Spectacular (Peggy Lennon), Sexy Baby (Kyle Kennedy) and SCARRIE (Tommy Ross).  AJ holds a degree in theatre from Ball State University.

Posted by Bonnie Kenaz-Mara at 2:28 PM