BACK FOR THE HOLIDAYS!
AGENCY THEATER COLLECTIVE PRESENTS THE RETURN OF THE CHICAGO CLASSIC WILL KERN’S HELLCAB STARRING

RUSTY SCHWIMMER AND PLAYING AT THE DEN THEATRE, 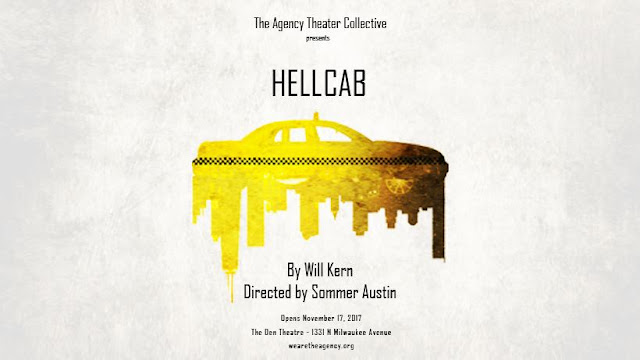 Here at ChiIL Live Shows we've seen many iterations of Hellcab from the initial production to frequent recent holiday remounts. We'll be out for the press opening November 16th to check out Agency Theater Collective's take on this hilarious, edgy, Chicago holiday classic. Check back soon for our full review.

The Agency Theater Collective announces Hellcab, starring Rusty Schwimmer, written by Will Kern and directed by The Agency’s Managing Director Sommer Austin playing at the Den Theatre, 1331 N. Milwaukee Ave., November 11 – December 17. Previews are Saturday, Nov. 11 at 7:30 p.m., Sunday, Nov. 12 at 3 p.m., Monday, Nov. 13 and Thursday, Nov. 16 at 7:30 p.m. Opening night is Friday, Nov. 17 at 7:30 p.m. The performance schedule is Thursdays – Saturdays at 7:30 p.m. and Sundays at 3 p.m. Tickets are pay-what-you-can for all performances. For more information and to purchase tickets, please visit www.wearetheagency.org or call the Den Theatre Box Office at 773.697.3830.

A Chicago classic returning to the stage, Hellcab is the story of a day in the life of a Chicago cab driver who experiences a drawn out, nightmarish night of fares from some of the city’s oddest collection of customers on a cold, snowy day just days before Christmas. Drawn from real experiences from playwright Will Kern’s days as a cab driver, the list of characters the cabbie encounters include: a dangerous trio of druggies, a piggish mini-capitalist, a benumbed rape victim, an argumentative pair of fellow cabbies, a drunken woman on welfare, a smug lawyer, a randy couple on the way to a motel, and two boisterous New Yorkers out on the town. With every encounter, we see through the cab driver’s eyes humor, terror, longing and more as she navigates all areas of the Windy City.

*The Actor appears through the courtesy of Actors' Equity Association, the Union of Professional Actors and Stage Managers in the United States.

+Denotes company member of The Agency

ABOUT WILL KERN, playwright

Will Kern’s writing credits, in addition to Hellcab, include Kid Sister and Mothers and Tigers: True Stories of Korean Women. As a screenwriter, Kern wrote the film adaptation of “Hellcab,” the award-winning short films “Pain Chain,” and “Lost in Rome.” His travel writing and essays have been published in numerous magazines and newspapers around the world. His first novel “Ballet for Guys” is built around Billy Jim Hauck, a political conservative and self-described “fat ass with brown teeth and a scraggly Yosemite Sam mustache.”

Co-founder and Managing Director of The Agency Theater Collective, Sommer Austin also directs and acts with them. She is a certified instructor of the Meisner Approach to Acting and co-founder/owner of Green Shirt Studio. Austin has made her mark in the improv/comedy, theatre and production worlds and has worked with theatre superstars including Mary Overlie, Ping Chong and Dr. Jonathan Miller. She was assistant director to Michael Patrick Thornton on the world premiere of David Rabe’s Good for Otto at The Gift Theatre and to Dexter Bullard on Annie Baker’s The Flick at Steppenwolf Theatre. For The Agency she has directed Chagrin Falls, co-directed Nautilina and acted in Paradise Lost, Out of Tune Confessional (which she also co-wrote) and At The Center. She received her Bachelor’s in Theatre Arts from the University of Iowa and has a Master’s of Fine Arts degree in Acting from the University of Wisconsin-Madison.

Rusty Schwimmer is thrilled to be back in her hometown of Chicago where the weather is perfect, the sausages are plentiful and the Cubs win. Schwimmer is best known for her roles in the feature films A Little Princess, Twister, EdTV, The Perfect Storm, Runaway Jury and North Country. She has also enjoyed working on the television series, “Louie,” “The Guardian,” “Gilmore Girls,” “Picket Fences” and “Six Feet Under.” On stage, Schwimmer was last seen in Los Angeles at the Mark Taper Forum in their production of House of Blue Leaves and in Chicago in Race at Lookingglass Theatre. Upcoming Film projects include Blood Stripe and Wild Honey.

Founded in 2010, The Agency Theater Collective creates relevant, authentic work with a focus on new or rarely produced plays. Past productions include Copi’s Four Twins, Clifford Odets’ Paradise Lost, Out of Tune Confessional, I Wish to Apologize to the People of Illinois, At the Center, Truth in Context (Non-Equity Jeff Award nominee for Best New Work in 2015/2016), The Spirit of ’76, and Chagrin Falls (Non-Equity Jeff Award nominee for Best Supporting Actor in 2016/2017). The Agency also hosts “No Shame Theatre,” a weekly theatrical open mic, every Saturday night at The Lincoln Loft. The Agency Theater Collective holds these principles sacred: revelation, paradox, humor, mischief and collaboration.

The Agency Theater Collective announces the Chicago holiday classic Hellcab, starring Rusty Schwimmer, written by Will Kern and directed by The Agency’s Managing Director Sommer Austin playing at the Den Theatre, 1331 N. Milwaukee Ave., November 11 – December 17. Previews are Saturday, Nov. 11 at 7:30 p.m., Sunday, Nov. 12 at 3 p.m., Monday, Nov. 13 and Thursday, Nov. 16 at 7:30 p.m. Opening night is Friday, Nov. 17 at 7:30 p.m. The performance schedule is Thursdays – Saturdays at 7:30 p.m. and Sundays at 3 p.m. Tickets are pay-what-you-can for all performances. For more information and to purchase tickets, please visit www.wearetheagency.org or call the Den Theatre Box Office at 773.697.3830.
Posted by Bonnie Kenaz-Mara at 9:22 AM