REVIEW: Chicago Premiere of THE REALISTIC JONESES Via Shattered Globe Theatre and Theater Wit Through March 9, 2019

Chicago Premiere!
Shattered Globe Theatre and Theater Wit present
a co-production of
THE REALISTIC JONESES
By Will Eno
Directed by Jeremy Wechsler

Everyone's familiar with the concept of "keeping up with the Joneses", but what happens when the Joneses in question aren't particularly healthy, wealthy or wise? In this fabulously funny comedy, two pairs of Joneses end up as neighbors and hilarity ensues, amid heart wrenching conditions. 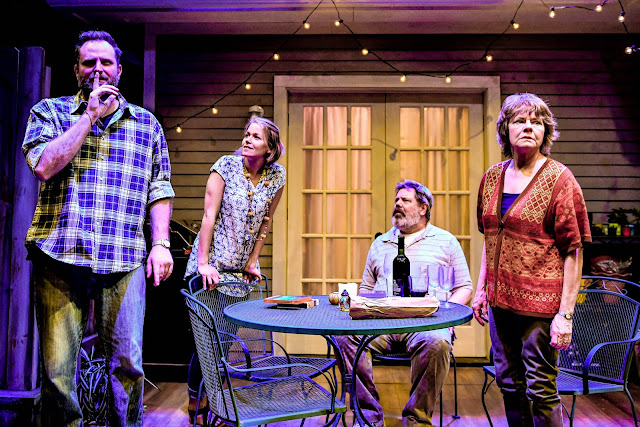 These 4 Joneses are collectively dealing with a fatal illness, insomnia, and a host of fears, phobias, quirks, and idiosyncracies ranging from anxiety to nymphomania. Despite their physical and social problems, underemployment, and issues, this foursome bonds, producing some of the funniest one liners and tenderest moments of commiseration. 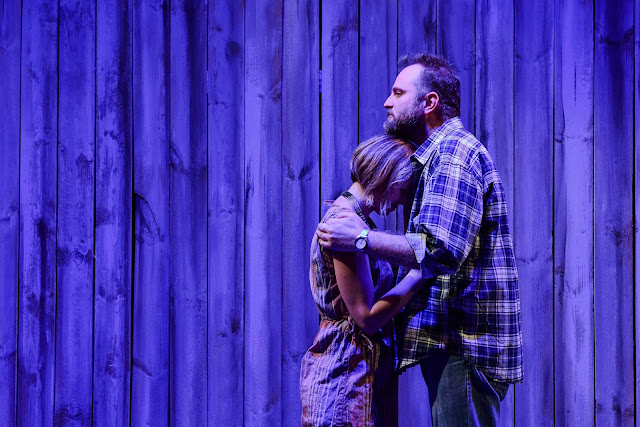 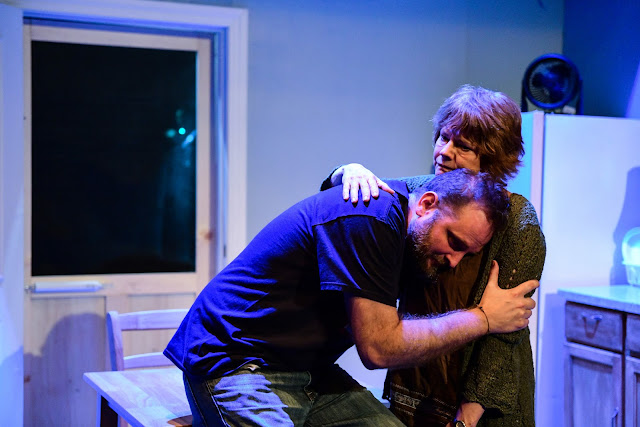 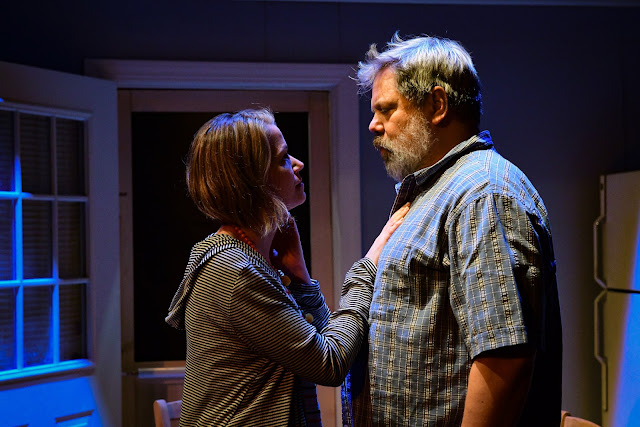 As they navigate dramas ranging from squirrel corpses to the public death of an acquaintance during a dinner out, these Joneses endear themselves to the audience. This slice of life comedy doesn't stray far from the back patio, but encompasses a world of possibilities. I thoroughly enjoyed this microcosm of human interaction, as 4 strangers become friends that I could see myself keeping up with. Highly recommended. 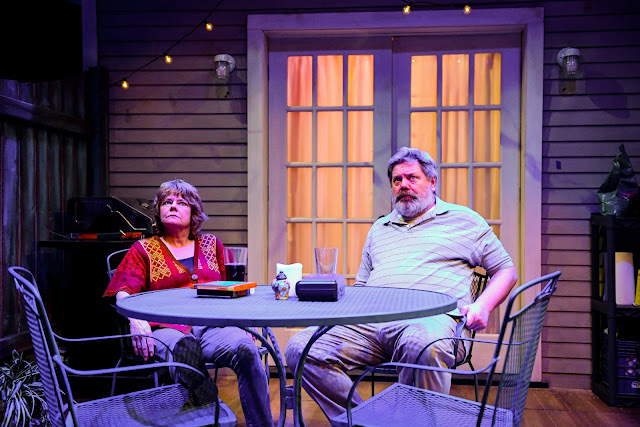 Shattered Globe Theatre and Theater Wit are pleased to present the Chicago premiere of Will Eno’s heartbreaking new comedy THE REALISTIC JONESES, directed by Theater Wit Artistic Director Jeremy Wechsler, who has directed the Chicago premieres of four of Eno’s plays. This breakout Broadway work of unspoken love and possibility will play January 10 – March 9, 2019 at Theater Wit, 1229 W. Belmont Ave. in Chicago. Single tickets are currently available at www.shatteredglobe.org or theaterwit.org, by calling (773) 975-8150 or in person at the Theater Wit Box Office. 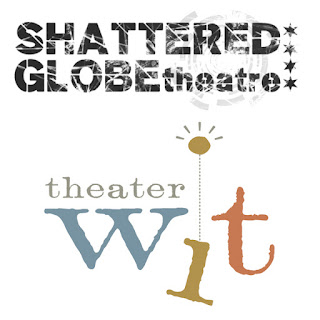 Meet Bob and Jennifer Jones. And their new neighbors, John and Pony Jones. These two couples have more in common than a last name in Will Eno’s funny, quirky and compassionate look at how marriage might be both everything and not nearly enough.

Join the Joneses as they muddle through the small beauties, immense fears, and amazing moments of each day. Time is short but there are gift certificates to enjoy, tiny fireworks to light and another perfect summer evening to take for granted. 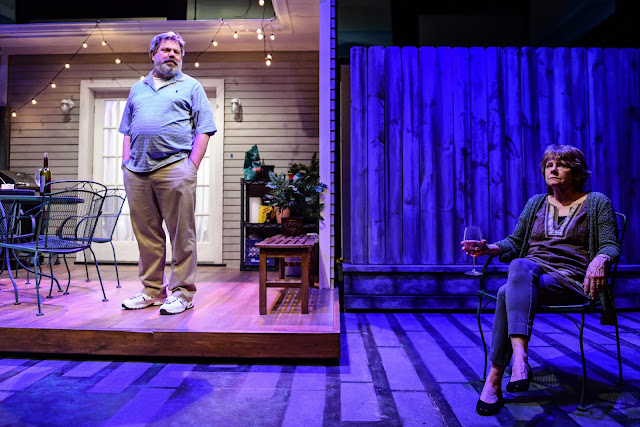 Comments Director and Theater Wit Artistic Director Jeremy Wechsler, “This production marks my fifth collaboration with Will Eno, who I consider one of the most graceful and insightful playwrights in America. Will and I are looking forward to bringing one of his most popular works to Chicago, a city whose acting talents are nationally recognized. Along those lines, I am particularly excited to work again with the Shattered Globe ensemble, where I last directed A Taste of Honey, long before Theater Wit was founded. I know them as a sharp and uniquely Chicagoan acting troupe; together, we hope to bring Will’s truly hilarious and touching play to vivid life.”

Curtain Times: Thursdays, Fridays, Saturdays at 8 pm; Sundays at 3 pm. Please note: there will be added performances on Monday, February 4 at 7:30 pm and Wednesday, March 6 at 8 pm.

Tickets: Previews: $12 – $18. Regular Run: $24 - $74. Student Rush tickets available day of performance for $15. $15 industry tickets on Thursdays with code “INDUSTRY.” Single tickets are currently available at www.shatteredglobe.org or theaterwit.org in person at the Theater Wit Box Office or by calling (773) 975-8150. Group discounts are currently available by contacting groupsales@shatteredglobe.org or by calling (773) 770-0333. 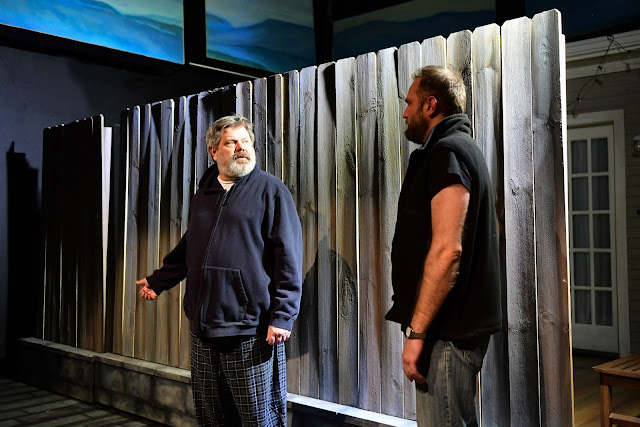 About the Artists:
Will Eno (Playwright) is a Residency Five Fellow at the Signature Theatre. The Realistic Joneses had its premiere at the Yale Repertory Theatre. The Realistic Joneses was recently named as one of the “25 Best Plays Since Angels in America” by the New York Times and The Realistic Joneses and Title and Deed (Signature Theater) were both onThe New York Times "Best Plays of 2012" list. Gnit, an adaptation of Ibsen's Peer Gynt, premiered at the Actors Theatre of Louisville in 2013. Middletown, winner of the Horton Foote Award, premiered at the Vineyard Theatre and was subsequently produced at Steppenwolf Theatre. Thom Pain (based on nothing) was a finalist for the 2005 Pulitzer Prize and has been translated into more than a dozen languages.

Jeremy Wechsler (Director) is the Artistic Director of Theater Wit where he has directed the Chicago premieres of The Antelope Party, 10 Out of 12, Naperville, The New Sincerity, The (Curious Case of the) Watson Intelligence (Best of 2015 – Chicago Sun Times), Bad Jews (Best of 2015 – New City), Mr. Burns: A Post-Electric Play (Time Out Peoples’ Choice Award for Direction, Best of 2015), Seven Homeless Mammoths Wander New England (Chicago Sun Times – Best of Year 2014), Completeness, Tigers Be Still, This, The Four of Us, Feydeau-Si-Deau, Men of Steel, Thom Pain (Based on Nothing) (Jeff Award – Best Solo Performance), Two for the Show and annual favorite The Santaland Diaries. Under Jeremy’s leadership, Theater Wit has emerged as the go to destination for cutting edge contemporary work, gaining national recognition for excellence. He has directed over sixty shows in the last twenty years at various theaters, including Tragedy a Tragedy, The Flu Season, A Taste of Honey (“U.S. Best of 2008” in The Wall Street Journal), Now Then Again (Jeff Award – Best New Work), The Play About the Squirrel, The White Devil, This Is Not a Play About Cancer, Peer Gynt, The Real Thing, Szinhaz, The Duchess of Malfi, Tragedy a Tragedy, Titus Andronicus, The Roaring Girl, Flight, The Most Fabulous Story Ever Told, This Is the Rill Speaking, Hay Fever, A Month in the Country, Europe, Henry VI: Blood of a Nation, The Promise, Spin, Un Robot, Horror Academy, Kind Lady, Playing by the Rules, The Marriage of Bette and Boo, Solitaire, The Coarse Acting Show, Life is a Dream, The Prisoner’s Dilemma, Cabaret and The Threepenny Opera. His productions have been nominated for and won multiple awards for design, performance, adaptation and best new work.

About Shattered Globe Theatre
Shattered Globe Theatre (Sandy Shinner, Producing Artistic Director; Doug McDade, Managing Director) was born in a storefront space on Halsted Street in 1991. Since then, SGT has produced more than 60 plays, including nine American and world premieres, and garnered an impressive 42 Jeff Awards and 106 Jeff Award nominations, as well as the acclaim of critics and audiences alike. Shattered Globe is an ensemble driven theater whose mission is to create an intimate, visceral theater experience that challenges the perspective of audience and artist alike through passionate storytelling. Shattered Globe is inspired by the diversity of our city and committed to making the theater available to all audiences. Through initiatives such as the Protégé Program, Shattered Globe creates a space which allows emerging artists to grow and share in the ensemble experience.

Theater Wit, Chicago’s “smart art” theater, now in its 15th year of operation, is a major hub of the Chicago neighborhood theater scene, where audiences enjoy a smorgasbord of excellent productions in three, 99-seat spaces, see a parade of talented artists and mingle with audiences from all over Chicago.

“A thrilling addition to Chicago’s roster of theaters” (Chicago Tribune) and “a terrific place to see a show” (New City), Theater Wit is now in its eleventh season at its home at 1229 N. Belmont Ave., in the heart of the new Belmont Theatre District in Chicago’s Lakeview neighborhood. In 2014, Theater Wit was awarded the National Theatre Award by the American Theatre Wing for strengthening the quality, diversity and dynamism of American theater.

The company’s most recent hits include Women Laughing Alone with Salad by Sheila Callaghan, The Antelope Party by Eric John Meyer, This Way Outta Santaland by Mitchell Fain, 10 Out of 12 and Mr. Burns, a post-electric play by Anne Washburn, Naperville by Mat Smart, The New Sincerity by Alena Smith, Bad Jews by Joshua Harmon, The (curious case of the) Watson Intelligence and Seven Homeless Mammoths Wander New England by Madeleine George and Completeness and The Four of Us by Itamar Moses.

Visit TheaterWit.org or call the Theater Wit box office, (773) 975-8150, to purchase a Membership, inquire about Flex Pass options or to buy single tickets.  To receive an “artisanal selection of consonants and vowels from Theater Wit,” sign up at TheaterWit.org/mailing for exclusive updates, flash deals and behind-the-scenes production scoop every few weeks. 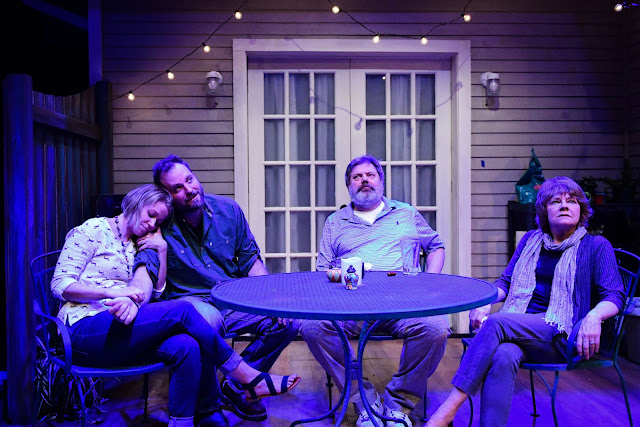 Posted by Bonnie Kenaz-Mara at 1:10 PM