Here at ChiIL Mama we know loving families come in many different configurations. Here in Chicago I personally have many gay friends who are raising their own or adopted kids and I have more friends currently looking to adopt. I've even had gay male friends father children for lesbian couples I know. If anything, these families are stronger and more stable than most of the straight families I know because most had to go above and beyond to create their chance to parent. I'm booked solid for most of February, but I'm trying to get over to Theater Wit to check this one out. AFT is a favorite of ours and I'm excited they're bringing the Chicago premiere of DADA WOOF PAPA HOT to the stage. 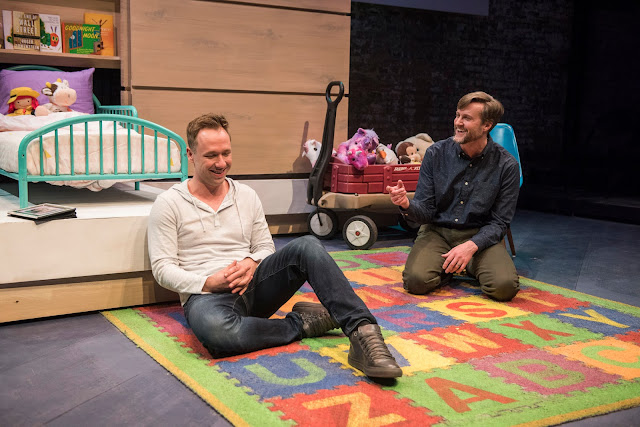 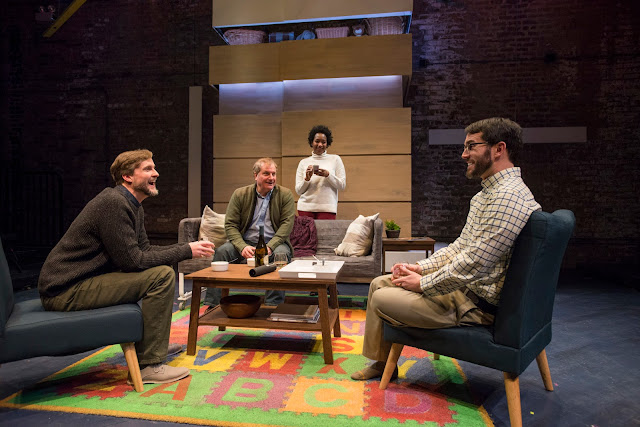 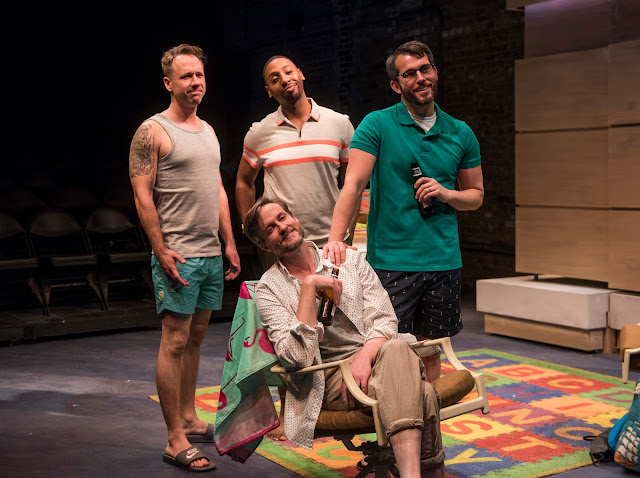 This tender, funny and very timely play introduces two gay couples and a circle of friends trying to find their way in the fast-paced high stakes world of modern parenting. As friendships deepen, vulnerabilities get exposed and the foundations of family and relationships – gay and straight – get shaken. Now that marriage equality is the law of the land, what happens next? And what gets left behind?

Comments Artistic Director Megan Carney, “Peter Parnell’s work has long captivated audiences in Chicago and around the country and this is a hilarious, forthright and deeply revealing play. The journey of Dada Woof Papa Hot connects people across many different experiences in the struggle to balance the delights of autonomy and independence with the comforts of coupledom and family. I love Keira Fromm’s vision for the production to illuminate how social pressures and personal longing impact couples.” 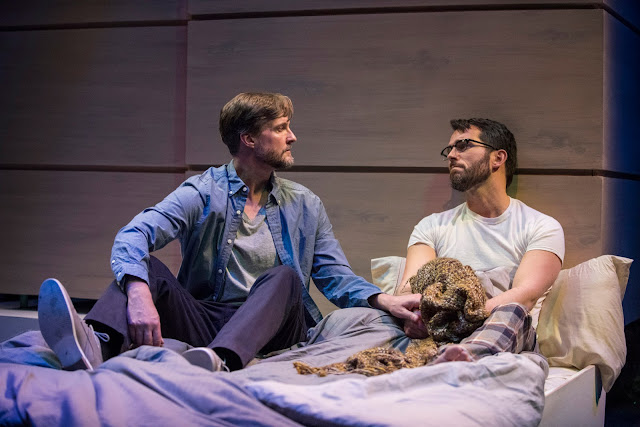 Adds Director Keira Fromm, “Dada Woof Papa Hot is a funny and moving play about the challenges of modern-day marriage and parenting. It’s also a play about how becoming a parent impacts one’s sense of identity and individuality. I love how the play reaches into contemporary married life and examines its difficulties for straight and gay people alike. The play takes place today in our post-marriage-equality moment where gay relationships and parenting have been normalized in our culture. The way it explores the unique problems that Alan and Rob (the central couple in the play) encounter while raising their young daughter in the wake of marriage equality makes for incredibly potent and compelling theater.” 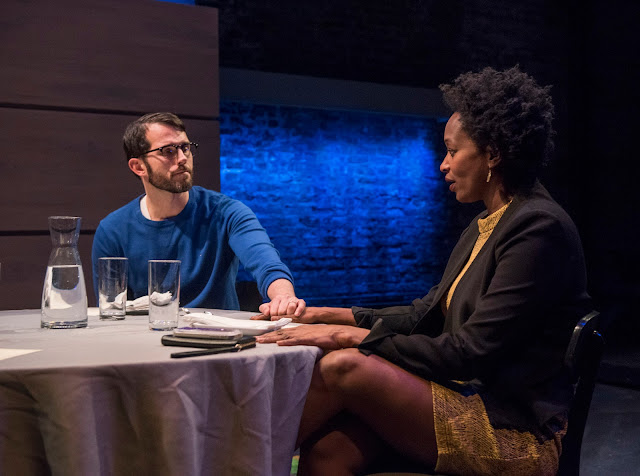 
This production is sponsored in part by a generous donation from Dr. Charles Rhee. 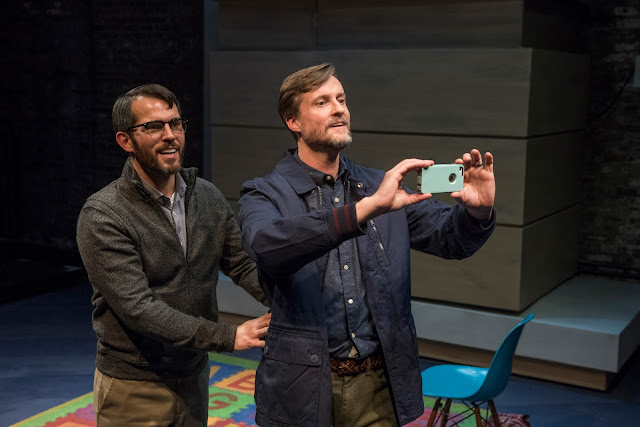 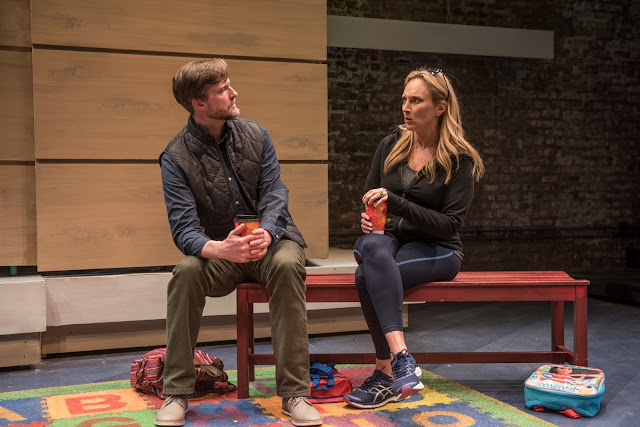 Curtain Times: Thursdays, Fridays and Saturdays at 7:30 pm; Sundays at 3 pm. Please note: there will be an added performance on Saturday February 16, 2019 at 3 pm. 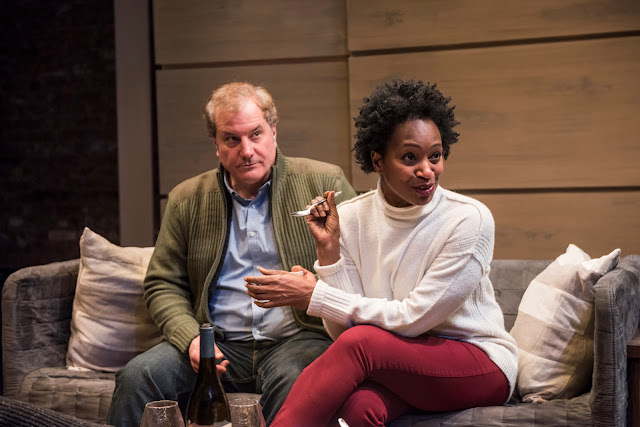 Artist Biographies
Peter Parnell’s (Playwright, he/him/his) plays, including Sorrows of Stephen, The Rise and Rise of Daniel Rocket, Romance Language, Hyde in Hollywood, Flaubert’s Latest and An Imaginary Life, have been produced by the Public Theater, Playwrights Horizons, the Mark Taper Forum, the Seattle Rep Theatre, the Old Globe and Center Stage in Baltimore, among others. His two-part stage adaptation of John Irving's The Cider House Rules won the American Theatre Critics Association Award, Ovation Awards, Joseph Jefferson Awards and Drama League nominations, and was produced at the Seattle Rep, the Taper, Trinity Repertory and the Atlantic Theatre Company in New York. His play QED was produced at the Taper and then on Broadway at Lincoln Center's Vivian Beaumont Theatre. For television, he was a co-producer for The West Wing (NBC; two Emmy Award Citations, two Humanitas Awards), producer for The Guardian (CBS, GLAAD episode nomination), and Inconceivable (NBC). He has written television pilots for ABC and Fox. He has served on the Literary Award Committee in Playwriting for PEN, and been the recipient of Guggenheim, Ingram Merrill, NEA and Fund for New American Plays grants. He has taught playwriting at Dartmouth and at the New School, and television writing in the Columbia University Film Division. His children’s book, And Tango Makes Three, co-authored with Justin Richardson, was published by Simon & Schuster in 2005, and is an ALA Notable Book, a Henry Bergh Award winner and was nominated for a LAMBDA Literary Award as best children’s book of the year.

Keira Fromm (Director, she/her/hers) is a Jeff Award-nominated director, casting director and teacher based in Chicago. Some favorite recent directing credits include: Bull in a China Shop (About Face Theatre), hang (Remy Bumppo), Significant Other (About Face Theatre), A Funny Thing Happened on the Way to the Gynecologic Oncology Unit at Memorial Sloan Kettering Cancer Center of New York City (Route 66 Theatre Company), Bright Half Life (About Face Theatre), The Columnist (American Blues Theater), How the World Began (Rivendell Theatre Ensemble), A Kid Like Jake (About Face), Luce (Next Theatre), Charles Ives Take Me Home (Strawdog), The How and the Why (TimeLine Theatre), Broadsword (Gift Theatre) and Fallow (Steep Theatre). Keira is a proud Artistic Associate with About Face Theatre. She received her MFA from DePaul University, her BFA from Boston University, is an alumna of the Lincoln Center Theater Directors Lab, and is a member of SDC, the professional directors union. Keira is a frequent guest director at DePaul, as well as Roosevelt University. She will be directing Miss Bennet: Christmas at Pemberley at TheatreSquared in Northwest Arkansas this fall.


About Face Theatre creates exceptional, innovative, and adventurous theatre and educational programming that advances the national dialogue on sexual and gender identity, and challenges and entertains audiences in Chicago and beyond. 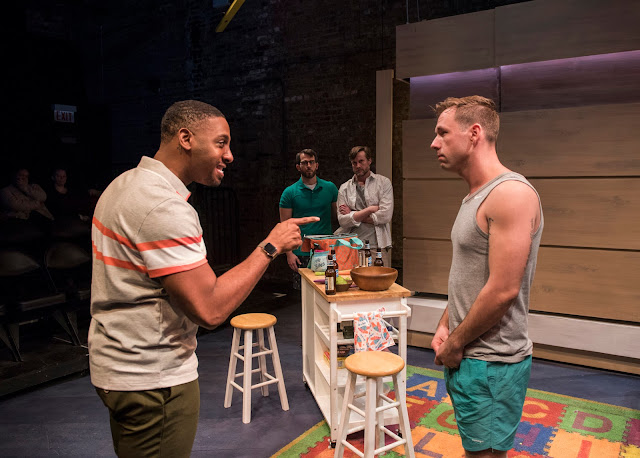