REVIEW: Chicago Premiere of I CALL MY BROTHERS Via Interrobang Theatre Project at Rivendell Theatre Through February 2, 2019

Through February 2, 2019 at Rivendell Theatre 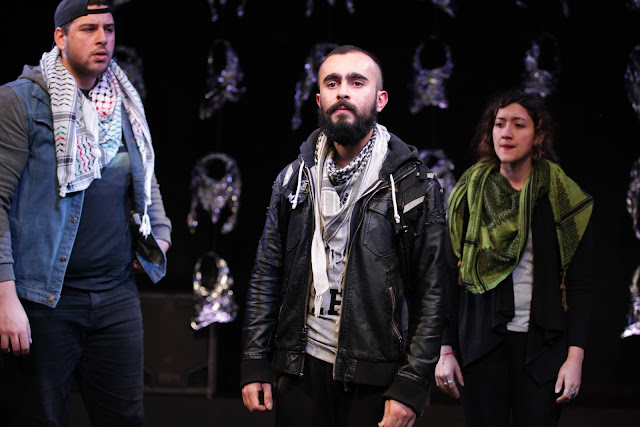 What do you do when the wind howls? It's all a matter of personality and perspective, how you handle the elements of adversity. In childhood, Amor (Salar Ardebili), a young Arab-Swedish man and science geek, nicknamed his friends with elements from the periodic table, by their personality types. As young adults, reconnecting by phone, in the wake of an Arab perpetrated car bombing in Stockholm, these traits remain true to type and provide an intriguing exploration of the myriad ways the innocents in a minority community deal with a society's collective suspicions and covert and overt racism. 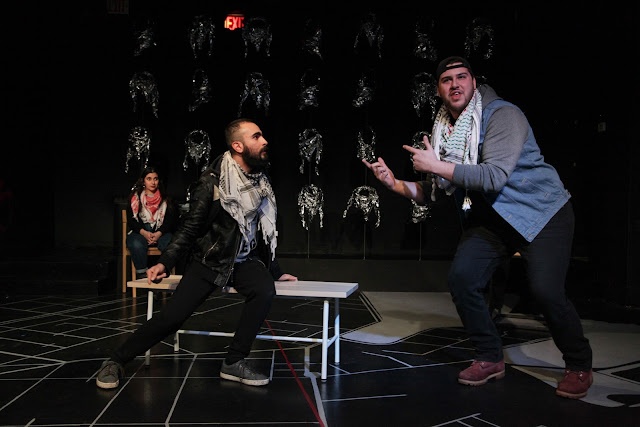 When Shavi (Chris Khoshaba), dubbed Helium for his ability to lighten and lift moods, breaks character with a barrage of frantic and worried calls, Amor can barely pick up and talk to his childhood friend. When tough girl cousin, Ahlem (Tina El Gamal), calls to check in from afar, Amor finds that the child he dubbed Titanium for her toughness and scrappy attitude has become a sudo-Buddhist spouting platitudes and oozing fakeness. 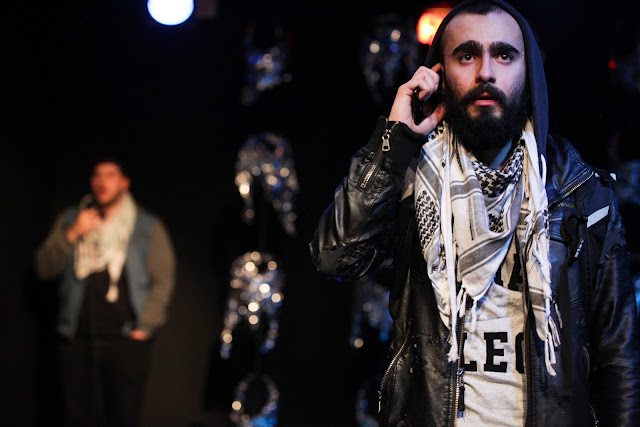 This brilliant production explores the psychological toll of suspicions, surveillance, fears, police presence, and a rabbit hole of imagined reactions, by placing the audience inside Amor's head. In the day after a public act of terrorism, perpetrated by someone resembling him, we join Amor in spiraling down a dark internal dialogue, punctuated by concerned check in calls from friends. As Amor and his "brothers": friends, relatives, and even a former girlfriend, process the events and ad nauseam news coverage, conflicting coping styles are amplified. 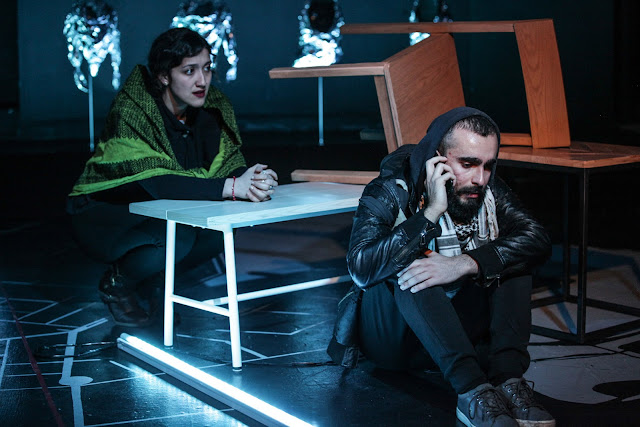 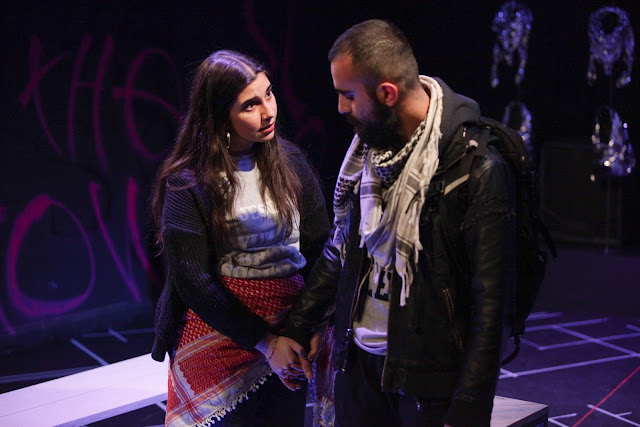 Some adapt by hiding in plain sight, shedding traditional dress and names for westernized alternatives, losing pieces of themselves with this rejection of cultural identity. Others go bold and visible, angry at an undeserved backlash. Some are even temped to snap in a violent self fulfilling prophecy, enraged by the constant barrage of suspicious glances. Those who try to "act normally" are still impacted by external profiling and forced into a heightened vigilance and an examining of their every move, in a futile attempt to appear non threatening. 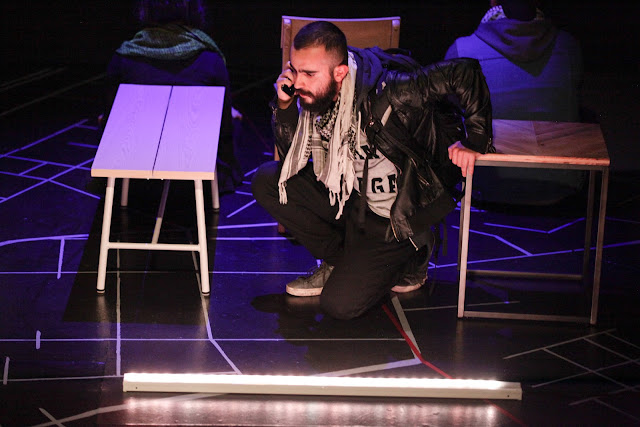 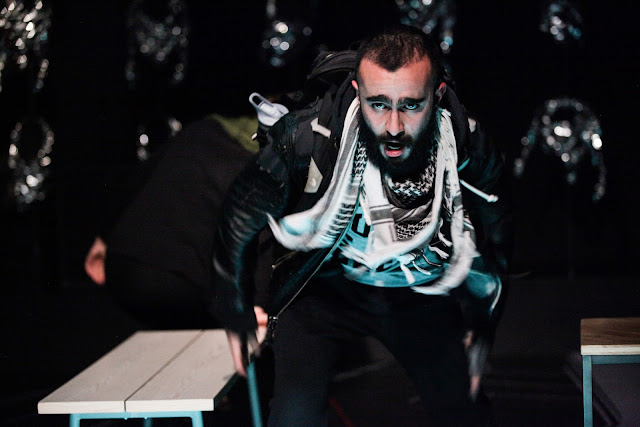 Although this story is set in Stockholm, Sweden, the themes are universal, as paranoia about public safety and terror of "the other" wars with reason and human rights on a global scale. I Call My Brothers is a powerful exploration of interconnection and the effects of internalized racism, particularly after a frightening public act. I left the show with greater empathy and understanding of all the hoops that innocents must jump through, just to peacefully coexist in a society that perceives them as a threat, merely by their physical traits or clothing choices. The whole cast is stellar, and the set design, featuring  minimalist furniture and a wall of metal keffiyehs and jijabs amplifies the action and perception of both malleability and strength. I love the idea of these symbols of Arab culture recast as something that can be shaped into something else without breaking.

Once again, Interrobang has mounted a thought provoking and timely production, not shying away from the tough stuff endemic to our society, that we all need to examine. 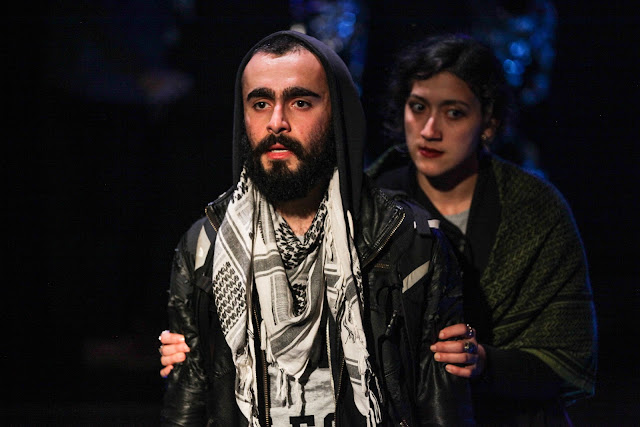 This production is sure to spark some vital discussions and dialogue. What a great springboard for building bridges between diverse communities and working toward erasing racism. Highly recommended. 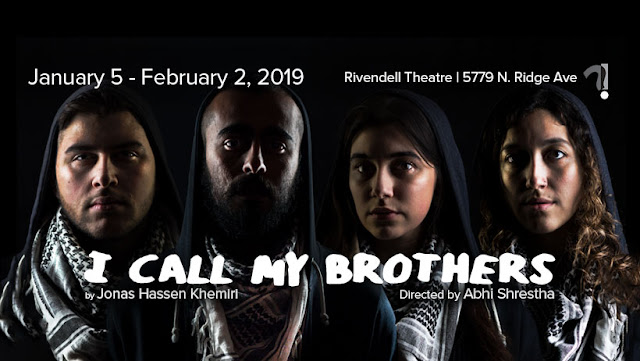 I'll be out for the press opening on Monday, January 7th, so check back soon for my full review.

Stockholm, Sweden. A car bomb rocks the peaceful city and leaves the Arab-Swedish Amor on guard and on edge. But he doesn’t have time to let his fear get the best of him; he’s got places to be. As Amor attempts to run his errand and grapple with his own anxieties, we follow him through a fraught 24 hours, cautiously navigating the city he calls home. Balancing paranoia and humor, Jonas Khemiri's nuanced account dares us to question our own perceptions and prejudices, while offering a singular and harrowing take on the labyrinth of global identity politics.

Jonas Hassen Khemiri (Playwright) is a celebrated author and playwright based in Stockholm. His novels have been translated into over 20 languages and his plays have been performed by over a hundred international companies on stages from Stockholm to Berlin to New York to London. Khemiri was awarded a Village Voice Obie Award for his first play Invasion!, which premiered in New York in 2011. His second play God Times Five toured Sweden and his third play The Hundred We Are received the Hedda Award for best play in Norway. Khemiri’s play ≈ [Almost Equal To] premiered at Dramaten in Stockholm in October 2014 to rave reviews and has been performed in Germany, Norway, Iceland and the U.S. His play I Call My Brothers began as an essay published in Dagens Nyheter in December 2010, one week after a suicide bombing in central Stockholm that shook the nation. The book was published to great acclaim and later became a lauded play that toured Sweden with Riksteatern in 2013 (directed by Farnaz Arbabi) and premiered in New York in January 2014. It has also been performed in Norway, Denmark, Germany (multiple theatres), Australia, San Francisco, France, Spain, Belgium, Switzerland, Finland and at the Gate Theatre in London, UK.

Abhi Shrestha (Director)  is a Chicago-based director, movement dramaturge and educator originally from Kathmandu, Nepal. Working at the intersections of decolonization and queer brown narratives, they are the Education Associate at Steppenwolf Theatre Company and Literary Manager and Director of Public Programming for Haven Theatre, the Resident Dramaturge and Community Organizer for the Chicago Inclusion Project, and a content curator for Rescripted. They are currently working on exploring a personal history of the world as told by brown grandma’s, in a performance installation called The Brown Grandma Project (working title). 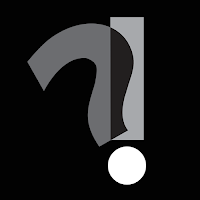 Now in its ninth season, Interrobang Theatre Project, under the artistic leadership of Georgette Verdin, has been hailed by the Chicago Tribune as a “company to watch” and by Time Out Chicago as “one of Chicago’s most promising young theatre companies.” Chris Jones called Foxfinder, which kicked off Interrobang’s 2017-18 season, “...a ripping good yarn,” earning it 3.5 stars from the Chicago Tribune. Foxfinder also garnered seven non-Equity Jeff Awards nominations including Best Director and Production of a Play, and took home two awards for Best Original Music and Set Design. The company also earned seven non-Equity Jeff Nominations for their seventh season, including Best Director, Production of a Play, Solo Performance and acting nominations for Lead Actor, Actress (win) and Actor in a Supporting Role (win). Productions have included the world premiere of Calamity West’s Ibsen is Dead (Jeff Recommended), the Jeff Recommended The Pitchfork Disney, Orange Flower Water, Recent Tragic Events, The North Pool, The Amish Project, Falling and Grace. Director James Yost’s critically-acclaimed Really Really was one of six shows chosen for Chicago Tribune’s “Best of 2015 in Chicago Fringe Theater.”