TICKETS ON SALE: World-renowned soprano Renée Fleming To Star In THE LIGHT IN THE PIAZZA December 14-29, 2019 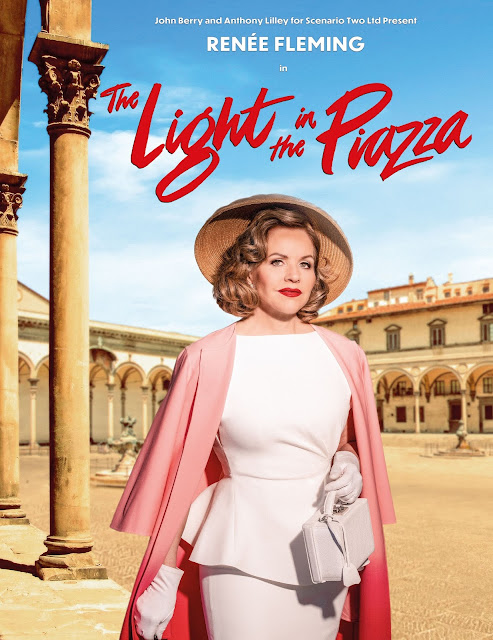 John Berry CBE and Anthony Lilley OBE for Scenario Two are delighted to announce a new production of the acclaimed Broadway musical The Light in the Piazza starring four-time Grammy Award winner and Tony Award nominee Renée Fleming as Margaret Johnson, who embarks on a fateful trip to Florence with her daughter in the summer of 1953. Additional casting including Broadway and West End stars to be announced soon.

After premiering in London at the Royal Festival Hall this summer, the new production will be presented in Chicago for ten performances only at Lyric Opera House from December 14-29, 2019 (press opening Saturday, Dec. 14). Tickets start at $49 and go on sale for Lyric Opera subscribers on Monday, March 25 at 10 a.m. Tickets will go on sale to the general public on Thursday, March 28 at 10 a.m. For more information or to purchase tickets, visit www.lightinthepiazzathemusical.com

The new production of The Light in the Piazza is directed by Olivier Award winner and critically acclaimed musicals expert Daniel Evans and designed by Robert Jones, with costumes by Brigitte Reiffenstuel, lighting by Mark Henderson and sound by Mick Potter. The ravishing score will be played by the Lyric Opera Orchestra under the baton of Kimberly Grigsby, conductor of the original Lincoln Center production.

Upon its Broadway debut, The Light in the Piazza was described by the New York Times as having “the most intensely romantic score of any musical since West Side Story.” Based on the novel by Elizabeth Spencer, The Light in the Piazza book is by Craig Lucas, with music and lyrics by Adam Guettel. Set in Florence during the summer of 1953, it’s a touching and unforgettable love story. A fateful gust of wind whisks Clara’s hat into the hands of local dreamer Fabrizio Naccarelli and it’s love at first sight. However, Clara isn’t quite what she appears.  Soon her mother is faced with a heart-wrenching decision, and they must all confront a secret that’s been kept in the shadows for far too long.

The Light in the Piazza’s rich, emotional score is unique amongst 21st-century Broadway musicals. Unapologetically lyrical and romantic, it transports audiences to 1950s Florence for a romantic evening of love and light.

About Scenario Two
Scenario Two is a new UK company founded by John Berry CBE and Anthony Lilley OBE, which specializes in commercial theatrical production in London and Internationally. It brings together the very best talent from the world of opera and musical theatre with top performers and creatives from other industries such as film, television and theatre. The company is creating exciting new productions of classic musicals and developing new commissions and thereby aims to attract both existing theatre-goers and new audiences in the West End and major theatres around the world. For more information visit www.scenario-two.com. 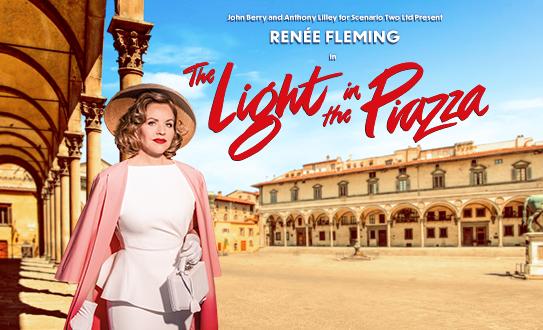 Posted by Bonnie Kenaz-Mara at 3:00 PM

Email ThisBlogThis!Share to TwitterShare to FacebookShare to Pinterest
Labels: Lyric Opera of Chicago, Renée Fleming, save the dates, THE LIGHT IN THE PIAZZA, tickets on sale, Tony Award-winning