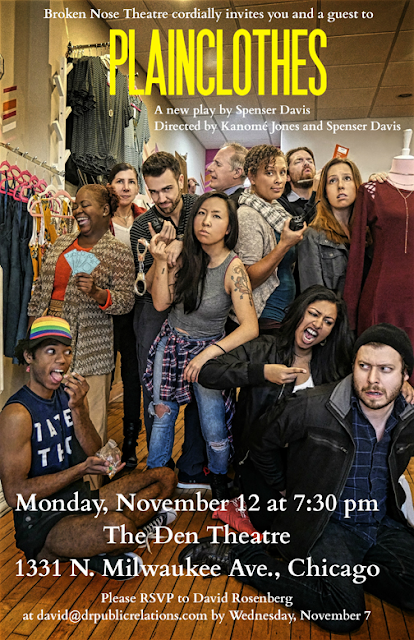 Here at ChiIL Live Shows, Broken Nose Theatre is a favorite of ours and we love that their “pay-what-you-can” policy, allows patrons to set their own price and ensuring theatre remains economically accessible for all audiences.
I'll be out for the press opening November 12th so check back soon for my full review.

Broken Nose Theatre is pleased to launch its seventh season with the world premiere dark comedy PLAINCLOTHES, written by company member Spenser Davis* and co-directed by Kanomé Jones and Davis. Developed with much of the team behind BNT’s runaway 2017 hit At The Table, PLAINCLOTHES will play November 9 – December 15, 2018 at its resident home, The Den Theatre (2A), 1331 N. Milwaukee Ave. in Chicago’s Wicker Park neighborhood.

Tickets are currently available at www.brokennosetheatre.com on a “pay-what-you-can” sliding scale.

When a violent encounter with a shoplifter leaves half of their team fired or in the hospital, the security guards of a downtown Chicago retail store find themselves under corporate investigation. Short-staffed, ill prepared and faced with accusations of racial profiling that threaten to dismantle the crew, they’re forced to decide: do we admit to something we're not guilty of to save our jobs, or do we give the higher-ups a taste of what it’s like in the trenches? In the style of their breakout hit At The Table, Broken Nose Theatre and playwright Spenser Davis have assembled an all-star cast to develop this world premiere.

Comments playwright and co-director Spenser Davis, "For years, I worked as undercover security for a major retail store on the Michigan Avenue, and it never ceased to amaze me how separate my team's world felt from the average customer's: while they traveled up eight bright, glittery floors of merchandise, we were confined to a closet-turned-camera room with spotty air-conditioning and banker's boxes of pointless paperwork. The loss prevention team in Plainclothes find themselves in just such a camera room when the ground shifts underneath their feet.”

Adds Davis, “Last year, we produced a play called At The Table, a play from New York which originated from a lengthy development process between its writer-director and a pre-cast ensemble of actors; we decided to take a crack at that same process in Chicago, allowing us to create tailor-fit roles for the ensemble. And because this play has always been about the conversations it evokes, it became abundantly clear how important it was to have that conversation on both sides of the production's table. Having Kanomé co-leading this process will inherently enrich the material, keeping this story and its characters as authentic as possible."

Spenser Davis (Playwright, Co-Director) is a longtime company member of Broken Nose Theatre, where he most recently directed Michael Perlman’s At The Table, named “One of the Best Shows of 2017” by Chicago Tribune, Time Out Chicago, Newcity and teen critic Ada Grey; it also received four Joseph Jefferson Awards, including Best Director/Play and Best Production/Play. Also at BNT, he has directed Perlman’s From White Plains, Elise Spoerlein’s A Phase, and several editions of Bechdel Fest. Outside of BNT, his directing credits include The Adventures of Spirit Force Five (The Factory Theater), Bachelorette (Level 11), numerous editions of the One Minute Play Festival, as well as work with A Red Orchid Theatre, American Theater Company, Chicago Dramatists, Strawdog, Mary-Arrchie, Hell in a Handbag, Oracle Productions, First Floor, Pride Films and Plays, Stage Left, Promethean Theatre and Arc Theatre. As a filmmaker, he’s the co-founder of Spilled Inc., a microbudget production company, and is the series director for SQUID, a short-form comedy series heading to Amazon Prime this Summer. As a playwright, he’s a past winner of Scotland’s Solas Festival, a finalist for the Actor Theater of Louisville’s Heideman Award, and his first full-length play Merge, about the rise and fall of the video game company Atari, closed The New Colony’s eighth season. His plays have been produced across the country and in Canada and have been published by Smith & Kraus New York. He’s also an ensemble member of The Factory Theater. Plainclothes is the first play in his trilogy The Mag Mile, which focuses on working class Chicagoans who are rarely seen onstage but are nevertheless the lifeblood that keeps the heart of the beautiful, brash, jagged edged city beating.

Kanomé Jones (Co-Director) is excited to be joining the Plainclothes Team. Most recently with Broken Nose, Kanomé directed the world premiere of Kingdom by Michael Allen Harris. She served as the Assistant Director for Radio Golf (Court Theatre) and for Insurrection: Holding History (Stage Left Theatre). Other past directing projects include Well Intentioned White People (SLT Residency), An Awaited Return (arciTEXT) and EL Stories: Riding the Line (Waltzing Mechanics). Past acting credits include Building the Wall and The Firestorm (Stage Left), The Book Club Play (16th Street Theatre), Twelfth Night (Midsommer Flight) and Titus Andronicus (Babes with Blades). She is the Casting Director for Strawdog Theatre Company and the Associate Producer for Midsommer Flight. Kanomé is also a proud alum of the Actors Theatre of Louisville Apprenticeship and a BFA graduate of Missouri State University.

Broken Nose Theatre is a Pay-What-You-Can theatre company. Founded in 2012, BNT was this year's recipient of the Emerging Theater Award, presented by the League of Chicago Theatres and Broadway in Chicago. The company has produced and developed 11 full-length plays (including 8 Chicago or World Premieres) and over 40 new womencentric short plays through their annual Bechdel Fest. We strive to spark conversation, cultivate empathy, and amplify underrepresented voices, and are committed to making new, exciting and relevant theatre that is economically accessible to all audiences. For more information, please visit www.brokennosetheatre.com.
Posted by Bonnie Kenaz-Mara at 9:31 AM