Shows On Our Radar: AVENUE Q FUZZING UP THE MERCURY Through September 9th, 2018

AVENUE Q RETURNS TO THE MERCURY
Our homegrown production of
AVENUE Q
lovingly revived on the Mercury stage!
After entertaining nearly 30,000 people over 169 shows and breaking all box office records for Mercury Theater Chicago, these sassy and lovable puppets are back for more fun and mischief. 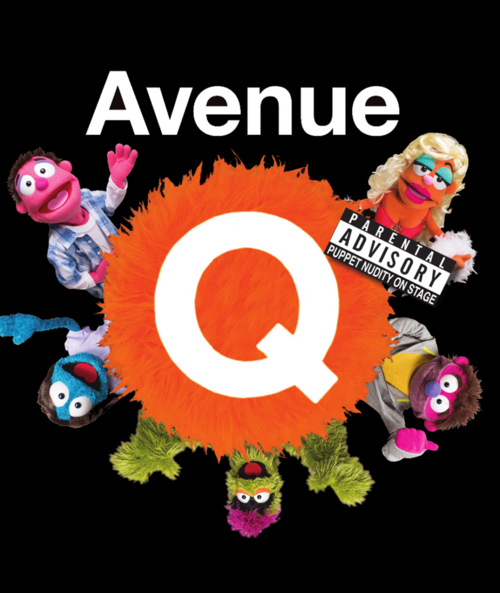 Come see what all the fuzz is about!

I caught the press opening the last time Avenue Q played The Mercury years ago, and can't wait to return and experience it again. This time my son's 17 and old enough to be my +1, so I'm even more excited to vicariously enjoy his first time catching Avenue Q. It's an absolute favorite of mine, and The Mercury's intimate space and stellar staging is the best! Avenue Q makes for an excellent adult night out, or a fabulously fun way to mortify your older teens. Don't miss this. 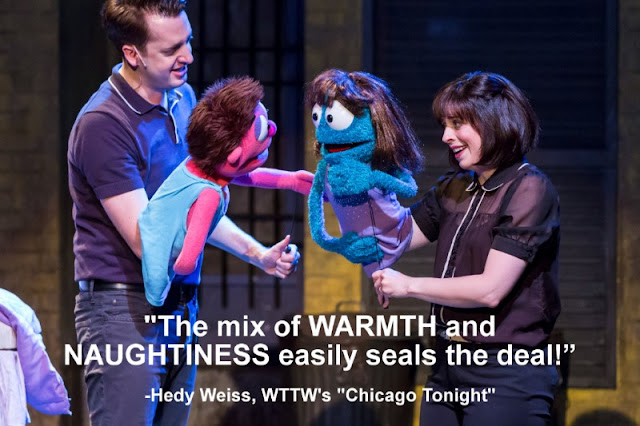 Winner of the Tony "Triple Crown" for Best Musical, Best Score
and Best Book in 2004, AVENUE Q is part flesh,
part felt, and packed with heart. 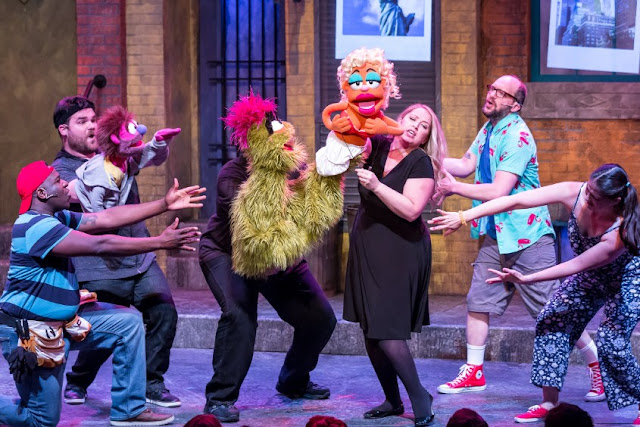 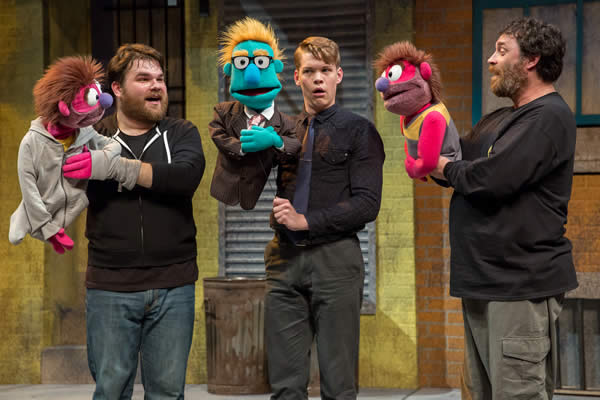 Audience members are falling in love with our newly revived production of AVENUE Q.

We’re honored to have master puppeteer, actor, puppet designer and builder Rick Lyon to lead puppetry training. Rick was a puppeteer on Sesame Street for 15 seasons as one of the operators of Big Bird; the first puppet he built as a child was Kermit the frog. He appeared on Broadway originating the roles of Trekkie Monster, Nicky, the blue Bad Idea Bear, and other characters in AVENUE Q, for which he designed and created all of the puppets. In the fall of 2005 he reprised his roles in the production of the show in Las Vegas for eight months before returning to the Broadway cast. Since 2006, he has built puppets and coached productions in a number of countries including Sweden, Finland, Mexico, Germany, Brazil, France, Australia and China. 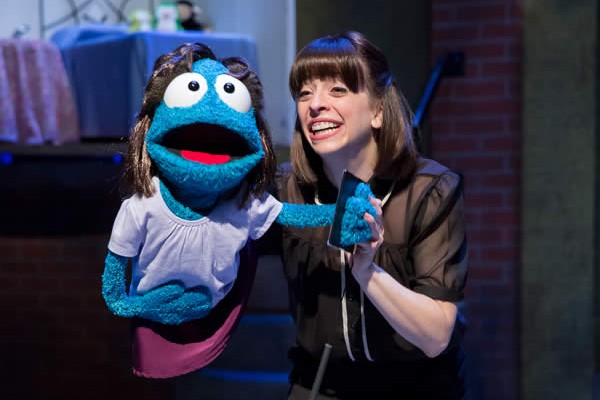 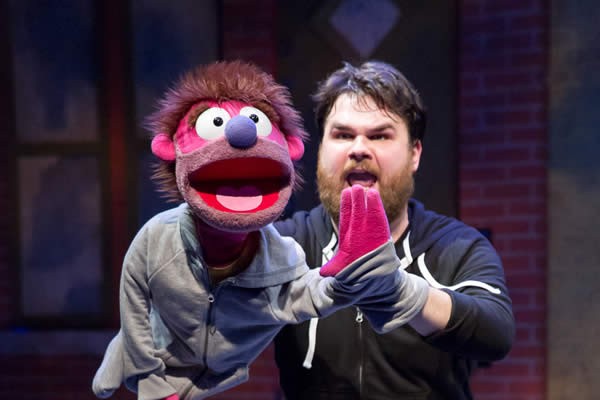 A racy cross between South Park and Sesame Street, AVENUE Q is a modern musical focusing on a group of unique 20-somethings making their way in the big city, seeking their purpose in life. Director L. Walter Stearns explains that the real magic of the show is when the audience “forgets that the puppets are nothing more than fur and felt and start to believe they have a mind, heart and soul.” It tells the timeless story of a recent college grad named Princeton who moves into a shabby New York apartment all the way out on Avenue Q. He soon discovers that although the residents seem nice, it's clear that this is not your ordinary neighborhood. Together, Princeton and his new-found friends struggle to find jobs, dates and their ever-elusive purpose in life. Although AVENUE Q addresses humorous adult issues, it is similar to a beloved children's show: a place where puppets are friends, monsters are good and life lessons are learned.

Whether it's your first time or 100th time seeing the show, it never fails to touch your heart and make you smile. 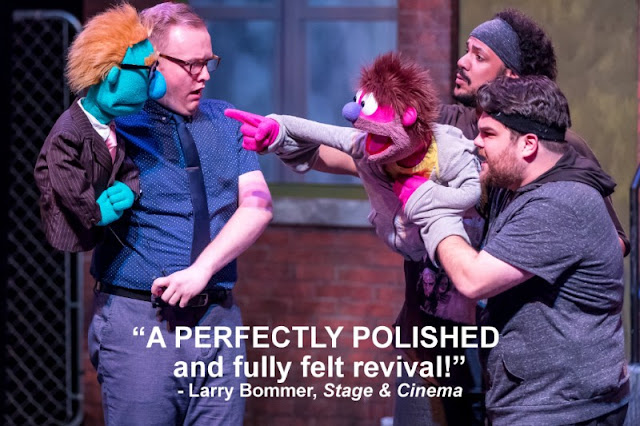 Director L. Walter Stearns explains that the real magic of the show is when the audience “forgets that the puppets are nothing more than fur and felt and start to believe they have a mind, heart and soul.” 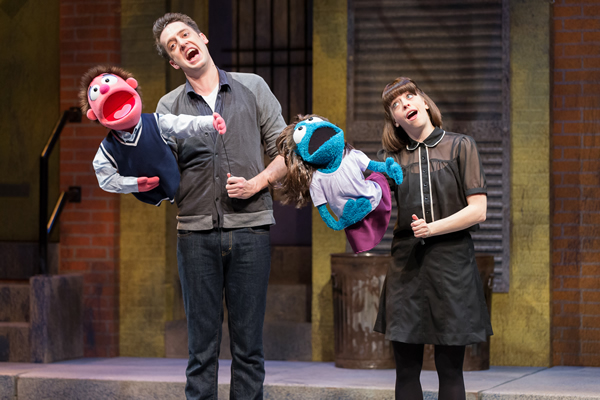 AVENUE Q is a laugh-out-loud musical that tells the timeless story of a recent college grad named Princeton who moves into a shabby New York apartment all the way out on AVENUE Q. He soon discovers that although the residents seem nice, it's clear that this is not your ordinary neighborhood. Together, Princeton and his new-found friends struggle to find jobs, dates, and their ever-elusive purpose in life. 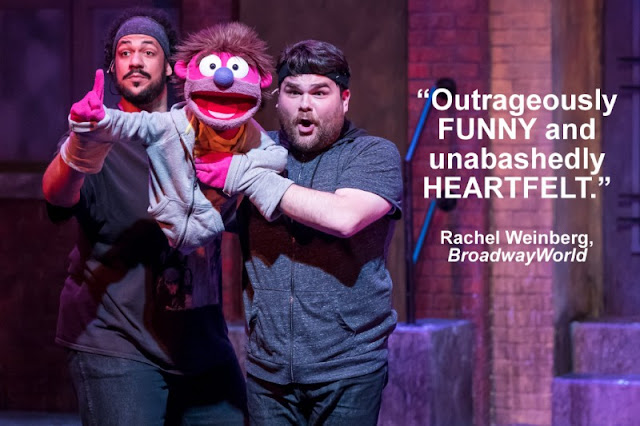 Filled with gut-busting humor and a delightfully catchy score, Avenue Q has become a favorite for audiences everywhere.

The production opened Off-Broadway at the Vineyard Theatre in March 2003, where it won the 2003 Lucille Lortel Award for Outstanding New Musical, as well as a nomination for the 2003 Outer Critics Circle Outstanding Off-Broadway Musical award. It played on Broadway at the Golden Theatre from 2003 through 2009 and is currently playing Off-Broadway once again at New World Stages. Mercury Theater Chicago's 2014 production of AVENUE Q won a total of five Broadway World Awards including Best Revival of a Musical and Best Direction and was nominated for four Joseph Jefferson Awards including “Production – Musical – Midsize”. Chris Jones of the Chicago Tribune described the show as “delightfully sweet and vulnerable…could not be more fun or charming to watch!” and the Chicago Sun-Times Highly Recommended the show saying it was “better than the Broadway original!” 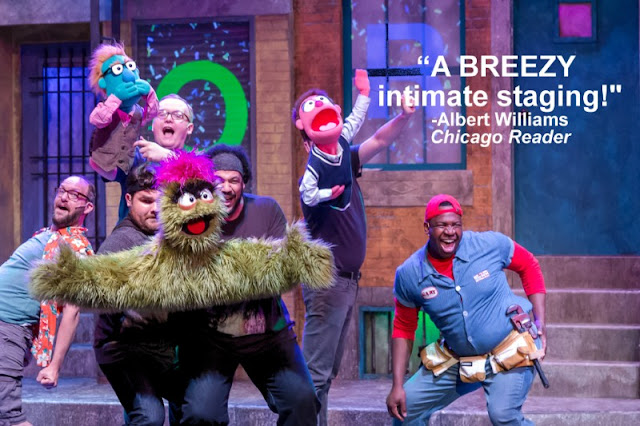 Individual tickets range from $35-$65, and are available online at www.MercuryTheaterChicago.com, over the phone at 773.325.1700, or in person at 3745 N. Southport Avenue, Chicago. Audience members are invited to upgrade their experience with an exclusive Post-Show Backstage Experience including a brief backstage tour, puppetry demonstration and Avenue Q souvenir for an additional $25 per person. 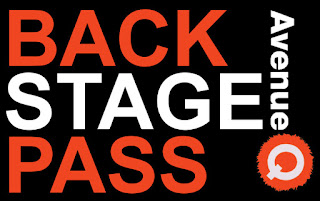 BACKSTAGE EXPERIENCE:
Upgrade your experience at AVENUE Q with a backstage pass and get exclusive behind-the-scenes access after the show including a brief backstage tour, puppetry demonstration and Avenue Q souvenir. 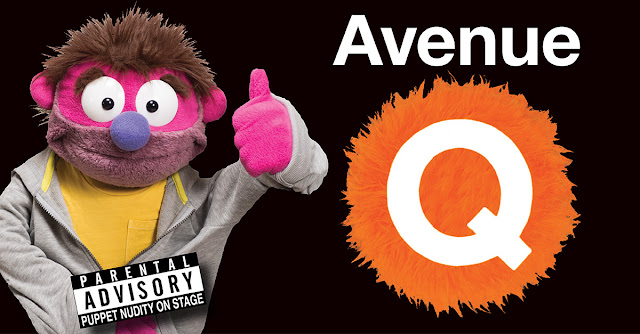 Check out Mercury Theatre's site for dates, times and info and order your tickets today.


The beautifully renovated Mercury Theater Chicago is an intimate jewel box of a theater in the heart of the Southport Corridor, a sophisticated neighborhood of restaurants and boutiques just steps from Wrigley Field. A delightful theater destination, Mercury Theater Chicago takes care of its guests from the moment they arrive with valet service and dining at its adjoining restaurant, Grassroots. Under the Direction of L. Walter Stearns, Mercury Theater Chicago will follow AVENUE Q with a production of PIPPIN in Venus Cabaret Theater (August 16 to October 14, 2018).

AVENUE Q runs through September 9th. The performance schedule is Wednesdays at 8pm, Thursdays at 8pm, Fridays at 8pm, Saturdays at 5pm and 8:30pm and Sundays at 3pm. Sunday evening performances at 7:30pm will be added on July 22nd.