**As I'm recovering from major knee surgery, Cath Hellmann will be guest reviewing for me throughout August. Cath is a lifelong theatre lover, on stage, directing, and in the audience. She's an English teacher, mom of three, and elated to be living in Chicago again, after a 10 year stint in the wilds of rural Michigan near Kalamazoo. ** 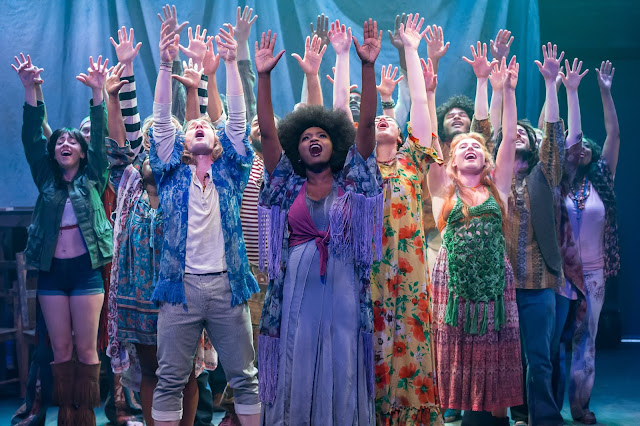 Photo Credit for all: Brett A. Beiner

On the way into the charming and intimate Mercury Theater, I spot a couple of anti-Trump buttons. It is an instant reminder that a hippie musical which premiered fifty years ago with its message of love, anti-war sentiment, and feeling disenfranchised from one's government is still sadly relevant today. In fact, a couple of the actors in their bios encourage the audience to support the ACLU or other causes in these troubling times. 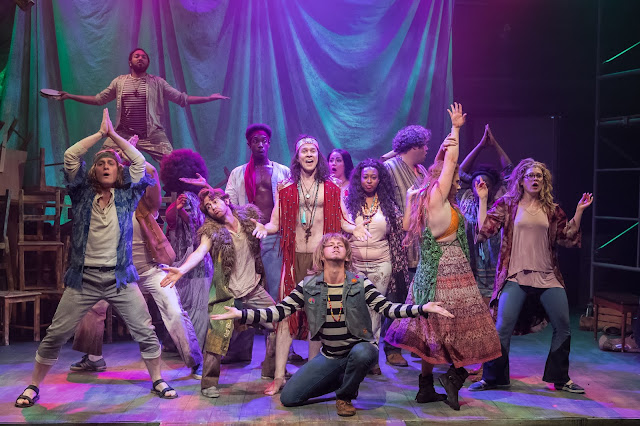 Even with its political intent, "HAIR" is a hell of a great experience at the theater with impressive singing, familiar songs you didn't think you knew, and exuberant performances, particularly by Matthew Keefer as Berger and Evan Tyrone Martin as Hud.

The transport back to the era of the late sixties begins immediately when an usher walks down the aisle bearing a sign with the requisite "turn your cell phone off" direction instead of a house manager announcing the rules. A lone woman with a large afro appears in the balcony singing about "When the moon is in the Seventh House and Jupiter aligns with Mars, then peace will guide the planets..." Suddenly the rest of the cast bursts in from the backstage door to join her in "The Age of Aquarius." ("They look like they just got back from Bonnaroo," my Mexican-Hippie-Music Lover-Companion [permission was suggested and granted for this nickname] whispers. 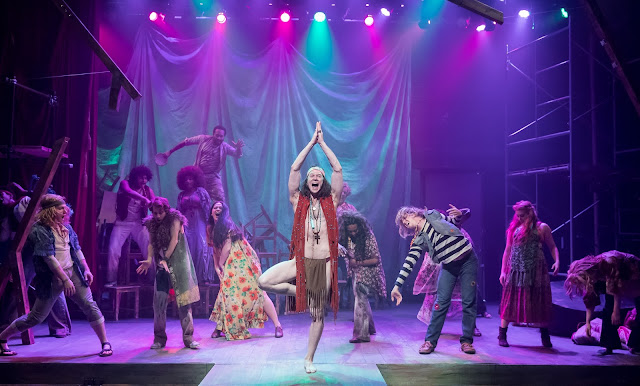 The plot of "HAIR" is rather thin, with the exception of Claude, played by Liam Quealy, torn over the peer pressure to burn his draft card or please his parents by being shipped off. One of the most affecting lines in the entire show is: "We're all Vietnam Bait." (Another modern tie-in: my teenage son's friend just joined the Marines. As his mother said, "I wouldn't be so worried if Obama was still in office." Parents are still scared for the safety of their children over our leader's political mistakes and hubris.)

The music, performances, and message drive the show. Matthew Keefer's sexy portrayal of Berger is such fun to watch, as he kisses both genders, strips down to his loincloth, and sings about peace and love. Lucy Godinez, who was so poignant in Porchlight Music Theatre's "In the Heights," delivers as another effective character, the naïve and pregnant Jeanie. In an additional eerie display of timeliness, Hud, played by Evan Tyrone Martin, warns in "Colored Spade," confronting racial stereotypes, "And if you don't watch out, the boogie man will get you. Boo!" 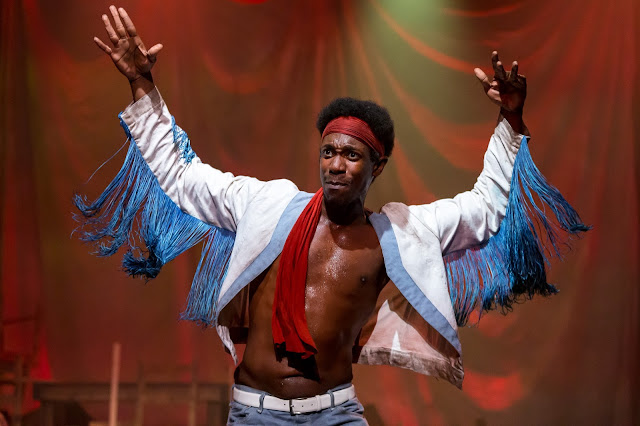 "HAIR" is known for its groovy costumes, drug references, nudity, rebelliousness, preaching love, and community. The ensemble at Mercury does not disappoint; when the entire group first raised their voices in unison, I got goosebumps. Such power from a small but mighty group of performers was inspiring.  At the end of Act I, when the cast strips down, the display of colored lights keeps the display of skin fairly hidden. Or as my surprised companion hissed, "I've never seen so many tits and dicks onstage!" 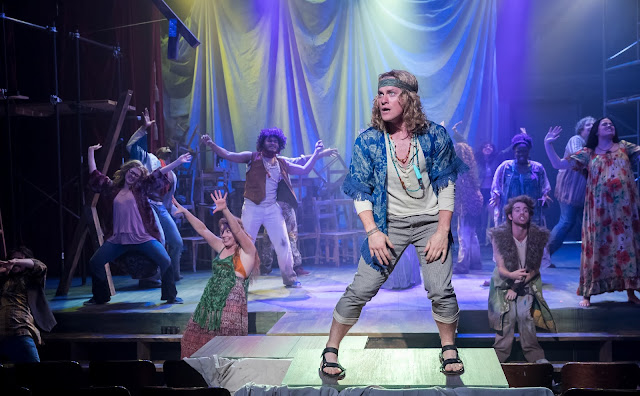 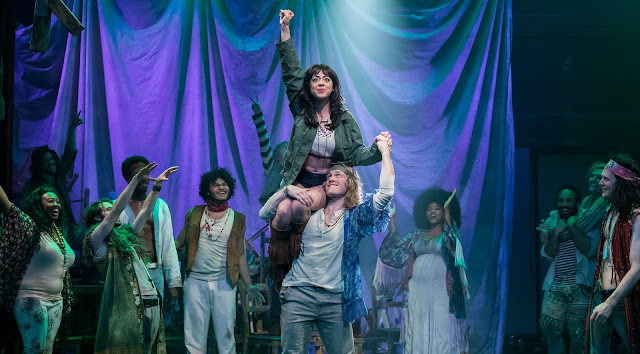 Great singing, fabulous energy, a positive message of love and acceptance, "tits and dicks onstage." "HAIR," running at the Mercury Theater at 3745 N. Southport Avenue, through September 17, has it all. Read more here. Bring your friends for an exciting outing of theater. Maybe leave the kids and Grandma at home to watch Lawrence Welk. Peace out.

Posted by Bonnie Kenaz-Mara at 5:15 PM