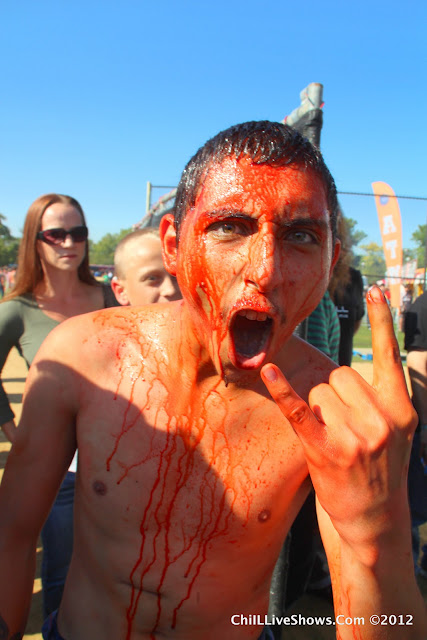 **ChiIL Mama and ChiIL Live Shows will be editing our 3,000 pixs and videos and running photo filled Riot Fest recaps for weeks.   For now, check out our LIVE pit photos from The Offspring Friday night at Congress right here and our best of Saturday and best of Sunday by clicking the links.** The eighth annual RIOT FEST--the music festival which celebrates rock, indie, punk and underground artists from every era--wrapped a successful run in its flagship home of Chicago drawing over 65,000 fans in its inaugural 3-day run this past weekend (September 14-16). Expanding into an outdoor music event and carnival in Humboldt Park for the first time, RIOT FEST & CARNIVAL proved to be a triumphant and celebratory event featuring full-throttle performances from Rise Against, Iggy and The Stooges, Elvis Costello, The Offspring, Descendents, The Jesus And Mary Chain, NOFX, A Day To Remember, The Promise Ring,Dropkick Murphys, Alkaline Trio, The Gaslight Anthem, Chiodos, Awolnation, Built To Spill, Gogol Bordello, Neon Trees, Fishbone, GWAR, Hot Water Music, Slapstick, Andrew W.K., Cursive, Imagine Dragons, The Adicts, NoBunny, Of Mice & Men, Minus The Bear, Frank Turner, Coheed and Cambria, Less Than Jake, Japanther, A Wilhelm Scream, Screaming Females, The Henry Clay People, Fireworks and many more.

After stops in Brooklyn, Toronto and its Chicago homebase, RIOT FEST heads south to Dallas, TX for its final show of 2012 on Saturday, September 22 atGexa Energy Pavilion. Artists featured on Saturday’s stop include: Rise Against, Descendents, NOFX, The Gaslight Anthem, Less Than Jake, Andrew WK, The Sword, Municipal Waste, Teenage Bottlerocket, Off With Their Heads, Messengers, The News Can Wait, Fever Dreamer, Mouth Of The South, The American Heist, Venomous Maximus and Not In The Face. 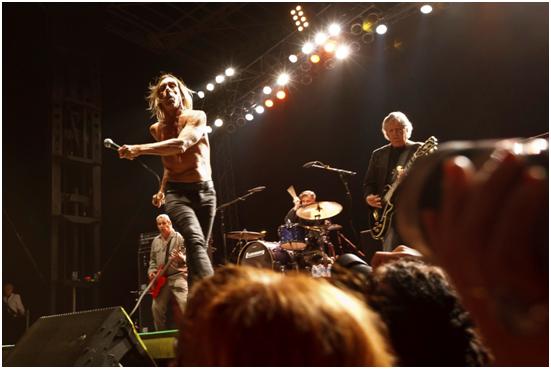 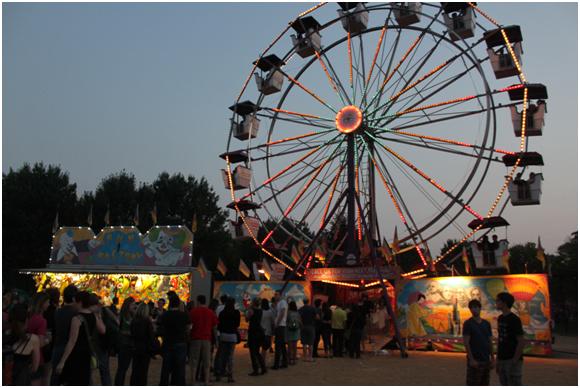 Check out what the press is saying about RIOT FEST and the powerful performances from its wide mix of artists:

“As if to soak every drop of sunshine out of the waning summer, Riot Fest brought 60,000 fans and 47 bands on four stages to the West Side park for one final fling in ideal weather. The park measured up as a comfortable landing spot for concertgoers; unlike the increasingly cramped confines of the smaller Union Park, which caps at about 20,000 people a day for the Pitchfork Music Festival in mid-July, Riot Fest felt a good deal more spacious. It lacked the human bottlenecks that plague Lollapalooza in Grant Park, and corporate signage was conspicuously absent. To fully saturate the senses, there also were circus rides, clowns, jugglers and professional wrestlers.”
--Greg Kot, CHICAGO TRIBUNE, 9/17/12

“This summer, I caught parts of Pitchfork, Lollapalooza, North Coast, the Hideout Block Party/A.V. Fest and Riot Fest.  Without question, the most easy going, least pretentious and fun crowd was the one I experienced over two days in Humboldt Park at Riot Fest. While Lollapalooza takes a bit too much advantage of it's sprawling environs in Grant Park, both Pitchfork and North Coast seem rather cramped at times in Union Park on the west side. It was really the perfect setup because sound bleed wasn't a problem between stages (set times were well staggered which helped) and yet the stages were still close enough to allow concertgoers to catch as many artists as possible. Personally, I can't wait to see how they try to top this in the summer of 2013 because as it stands right now, Riot Fest is second in Chicago festival size and stature only to Lollapalooza.”
--Jim Ryan, CHICAGO NOW (9/19/12)

“The transformation of Riot Fest from a late-autumnal, five-day club haunt into a last-week-o’-summer outdoor festival now stabs a sharp period on the end of the increasingly eclectic and electronic season by blaring all rock and roll, all the time. …The weather agreed. After an opening night (with Neon Trees, the Offspring and more) indoors at the Congress Theater, the eighth annual Riot Fest expanded Saturday and Sunday into sunny, cool Humboldt Park, complete with four stages and carnival rides. Saturday’s lineup featured party animal Andrew W.K., Chicago punks Rise Against and the creatures of GWAR in a rare daylight performance. Sunday’s bill ran the gamut, too, from the basic pop-punk of L.A.’s NOFX and Chicago’s Alkaline Trio to veteran new wave kingpins and local garage rockers. Sunday spotlighted two ’80s icons. First, the sedate statesmen of the Jesus & Mary Chain generated its torrents of guitar squall. I forget how sludgy they can get in concert, opening with a bass-heavy, almost country lope (“Snakedriver”) and then brightening up the guitars and the rhythm for “Head On.” Guy next to me: “They’re like Helmet on Quaaludes.” Elvis Costello & the Imposters, on a main stage but in a sundown slot, played the most Attractions-rich set I’ve seen the old curmudgeon deliver. Peeling off track after track from a best-of set list--“Radio Radio,” “(I Don’t Want to Go To) Chelsea,” “Less Than Zero,” “(The Angels Wanna Wear My) Red Shoes,” “Pump It Up,” a raucous reggae take on “Watching the Detectives,” on and on--he barely took a breath as his band of pros colored the old chestnuts but kept them hot. …Iggy Pop, his mane and his lumpy torso hit the stage embodying “Raw Power.” He and the Stooges spent the festival’s final hour reeling between rockabilly grooves and punk attacks. The biggest hit of the weekend, though, may have been Humboldt Park, which acquitted itself well as a festival site. Riot Fest reports 30,000 people attended each day Saturday and Sunday, but the park sure felt roomy and easy to maneuver. The addition of carnival rides is a great touch.”
--Thomas Conner, CHICAGO SUN TIMES (September 17, 2012)

The almighty, headlining Stooges were just gathering momentum on the Riot Stage, entering a barnstormer rendition of ‘1970,’ as tens of thousands stood in awe… James Osterberg, Jr. was a force Sunday night, a creepy, horny, sixty-five-year-old force of nature, but the Stooges were incredible in their own right. As any rock n’ roll scholar knows, if your only knowledge of the Stooges was their first album, your head would have exploded at Riot Fest. Even considering the later records, this band has become so tight and so talented as to be, arguably, at the all-time top of their game. …There’s too much to be said about this set. All I know is there will never be another Stooges, and it’ll be a sad day when Iggy’s reign as the king of punk inevitably comes to a close. But it'll take the grave. And then, just maybe, we’ll see another. Until then, we know where to look for inspiration.”
-- Dave Satterwhite, TIME OUT CHICAGO, 9/17/12

“The final day of Riot Fest was anything but riotous. Perfect weather, a friendly crowd, old timer headliners and enough snarky t-shirts to stock 10 Alley's, the punk rock circus was a success. Headliners Iggy and The Stooges, Gogol Bordello, Alkaline Trio and Elvis Costello & The Imposters knew why they were booked. Each act played a greatest hits set, or at least hits to the crowd. The inaugural Riot Fest in Humboldt Park will hopefully happen again. No longer stuck choosing between legendary punk bands on opposite sides of the city, a Pitchfork-like setup made seeing acts, well, a day in the park.”
--Brandon Weatherbee, HUFFINGTON POST (9/18/12)

“Aside from the impeccable line-up, Riot Fest Chicago stood out in another way: The awesome (!) addition of a carnival! Featuring rides, Lucha Libre, side show acts and much more, as one can imagine, the carnival portion of Riot Fest yielded much joy . . . and bizarro sights.”
--Brian Howe Battle, PUREVOLUME.COM (9/17/12)

“There's something about a Ferris Wheel that can put anyone in a good mood. This year Riot Fest evolved from a collection of shows spread out among several venues to a full-fledged festival in Humboldt Park, with four stages, circus performers, and carnival rides and games. …in our Riot Fest preview founder Mike Petryshyn compared his new baby to a state fair. But unlike most state fairs, Riot Fest is about punk, and the mix of rowdy bands and brightly light attractions proved to be a winning one. Any good carnival combines youthful rambunctiousness with grown-up nostalgia, and the Riot Fest lineup provided for plenty of both as well. Take California punk act NOFX, whose juvenile sense of humor seems to defy the aging process; on Sunday afternoon they traded playful, self-deprecating jabs between fast-paced punk tunes. Four hours later Iggy & the Stooges burst onstage, churning out their brutal classic protopunk while Iggy thrashed and yelped…the oppressive atmosphere that tends to hang over large festivals was absent. Maybe it was the pleasant, totally nonsweltering weather, the shady greenery of Humboldt Park, or the remarkably well-behaved crowd, which certainly never felt like tens of thousands of people.The best part had to be the carnival, though—or rather the marriage of punk bands and a carnival. The side attractions functioned as a welcome respite from the sometimes overwhelming festival experience—being stuck in a mass of humanity for eight or ten hours can make any sane person feel claustrophobic. This year at Riot Fest folks could take in a wrestling match while halfway listening to Elvis Costello & the Imposters, or catch an impromptu performance by the Environmental Encroachment marching band in the middle of Hot Water Music's set. Sometimes the juxtapositions were perfect: I never thought I'd get to watch fire jugglers while the Descendents played.”
--Leor Galil, CHICAGO READER, (9/19/12)

“Promoter Mike Petryshyn has done the unthinkable: He’s added another outdoor festival to Chicago. …They went all out in the inaugural year of this format. When the poster reads “and Carnival” they weren’t kidding. This added such a unique element to what’s admittedly become such a predictable format these days. All throughout the weekend, thousands upon thousands of patrons waited in line for either the Ferris Wheel, the tilt-a-whirl, or the fun house. It was surreal, but on paper it successfully pushed past the confines of what a music festival can be and what it can offer. Riot Fest, in a way, rewrote the rules. I mean, really, outside of maybe Coachella, where else can you hop on a Ferris Wheel and hear the Descendents blast through choice cuts off Milo Goes to College? It’s pretty cool. Also, Humboldt offers such a beautiful escape. Within the grounds there were little meadows, ponds, and forested areas that offered more than enough natural variety and shade to keep things fresh and ethereal. Maybe it’s just me, but I appreciate setting just as I do a lineup, and the far out confines of Humboldt allowed for a compact, breezy, and relaxed adventure. Nary a body sported clean, undocumented skin, and if it wasn’t flagrant tattoos, it was a bevy of costumes, including Bee Ladies, creeps on stilts, and even a portly guy in a popular horse’s mask. This sort of fare littered the park with character, which coursed through its proverbial spinal column, and culminated in one warm, positive aura. Juxtapose all that with a slight chill in the air each evening and you had Chicago’s first bonafide fall music festival. Or: It was the closest thing to Utopia that one might achieve at a festival headed by the likes of Iggy and the Stooges. You’ve gotta respect that.”
--Michael Roffman, CONSEQUENCE OF SOUND, (9/19/12) 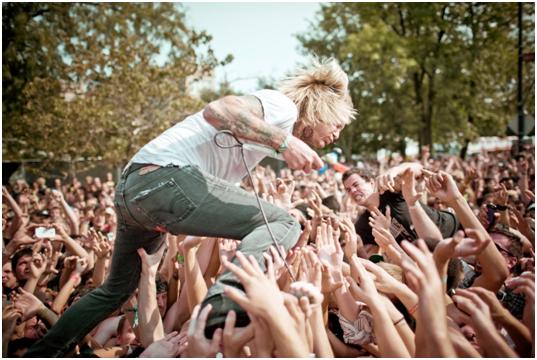 Posted by Bonnie Kenaz-Mara at 7:42 PM