Greensky Bluegrass & Van Ghost (solo) This Sat At The Abby 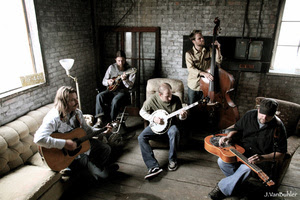 **ChiIL Live Shows will be there to shoot this Saturday after we catch Mathien's early set at Reggies at 7PM!   Can't wait to see Greensky Bluegrass tear it up at The Abby!    Icing on the cake--Van Ghost (Solo) is opening.    Check out our Van Ghost live show shots from North Coast Music Fest 2012.**

If you're familiar with bluegrass music, then you're tuned in to some of what Greensky Bluegrass does. They're also known to throw a great party, rock n roll, and (if the critics are to be believed) they have great songs. They are unquestionably a team of friends that traverse the country making music they enjoy. What makes Greensky different than Bluegrass? Poignant rural ballads about real people? Dobro tone that Jerry (Douglas or Garcia) would love? Distortion Pedals? Grit and attitude from a whiskey soaked card game? Indeed, but that's just the tip of the iceberg.

This quintet from Michigan has been staying up late at all the coolest festivals and stopping to play your favorite clubs and theaters across America for 11 years now. Nearly 175 shows per year has prepared them for the rigorous task of continuity. Greensky Bluegrass isn't slowing down. "They're coming to your town to help you party down." Yeah. Really. Like you never thought possible.

At the start of the millenium,some of these guys met, then they met more guys. They thought Greensky was a clever name for a bluegrass band. Fast forward to 2011 when they recorded their fourth studio record, called Handguns. Among them, words like, "proud," "killer," and "damn right!" have been spoken in regards to the music of Handguns.

While they all may be accurate, we hope you'll find far more than you expected, hell - even more than we expected contained in this piece work that may well come to define one of 21st Century America's hardest working musical ensembles.

For nearly a decade Michael Harrison Berg of Van Ghost was a behind the scenes type of guy. Having poured his energy into his ventures as a concert promoter and band manager, little was left over for personal creative endeavors.

That all changed in 2007 when Berg's close friends encouraged him to revisit the acoustic guitar he put down in his younger days and asked him to perform a song at their wedding. Melding the inspiration from the many talented bands he has worked with and his own passion for music, the singer returned to his roots. He began writing songs, drawing from his life experiences, creating a heartfelt and staggeringly honest perspective. After building up a solid repertoire of folk ballads, gritty Americana tunes and classic rock laced jams, Berg assembled an all-star cast of musicians and named the project Van Ghost.

With an exquisite 6 piece band flavored with pedal steel and psychedelic guitars, an earth shattering rhythm section, and haunting guy/girl harmonies, the band played it's debut show before a packed audience at Chicago's revered Metro in January 2008. It was an auspicious beginning for one of Chicago's most promising new acts.

Following up their debut record, "Melodies For Lovers", on Split Red Records, the band headed down to Nashville, TN to begin the tracking of their next release. With 2009 Grammy award winning Producer/Engineer/Mixer, Justin Niebank at the helm the bands sound continues to develop and expand. Berg has established that he is as comfortable operating under the spotlight as he is behind the curtain.

With Van Ghost he sets out to inspire music fans the same as other artists have inspired him - one song at a time.