“This is a beautiful theater! Everything here looks new,” marveled my sister and burgeoning theater critic. We made the trek to Arlington Heights for a performance of Sister Act. Having been raised in a big Catholic family and attending parochial schools, we knew the topic would be something we could relate to. (Well, ok, beides being a nightclub singer hiding in a convent from her murderous boyfriend…) Natalie “Nat” Renee Savoy has a blast as Deloris Van Cartier, the singer-in-disguise-as-a-nun. She seems more comfortable in the role of Sister Mary Clarence (“patron saint of prisoners!”) than as Deloris, even if she does want to accessorize her black and white habit.  :-) 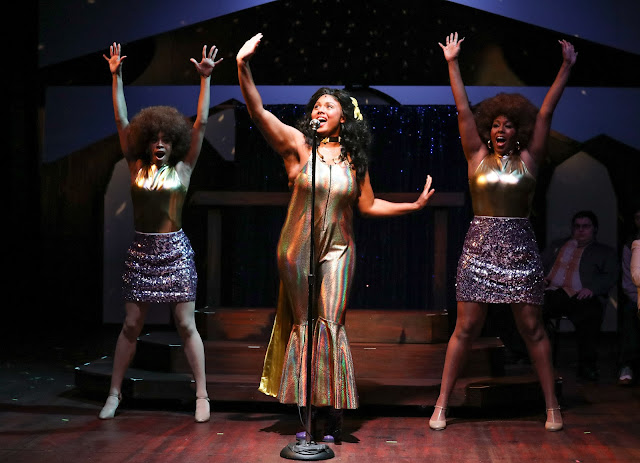 Monsignor O’Hara (Christopher Johnson, having fun in the role) convinces Mother Superior (a great Lauren Miller) that Deloris will be joining the order. Mother isn’t thrilled and questions the decision. Father reminds her that she took a Vow of Charity. 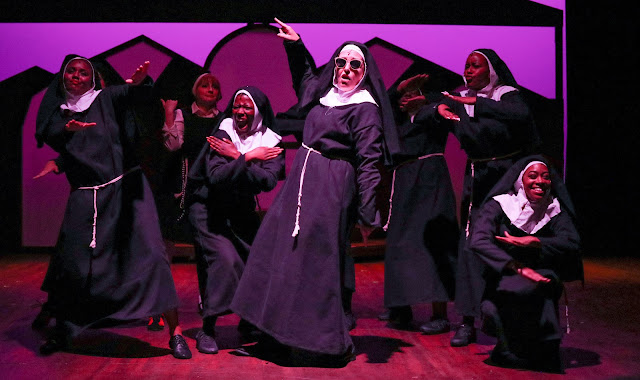 The women’s choir at the convent is terrible; it’s laughable and impressive how bad their singing is. To describe the atrocious choir, Mother Superior says, “There are no words.” Sister Mary Clarence is given the challenge by Mother Superior of improving the choir; Deloris is to use her talents as a performer to elevate their singing. Under her guidance, the sisters bond, the Church’s finances turn around, the two “bachelors who liked the ‘gothic look’ of the church” and want to buy it end up declining, and an offer is extended to sing for the Pope. Sister Mary Clarence is making her mark.

The breakout role was Sister Mary Robert played by understudy Athena Kopulos. She was so sweet and charming as the very shy novice who finds her voice and her courage. I love when understudies get a shot and shine. 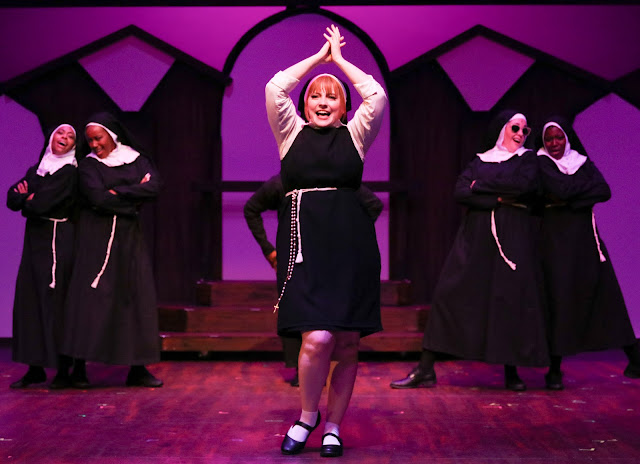 We assumed we’d recognize the songs from the Whoopie Goldberg movie. But all the songs were unfamiliar, penned by Alan Menken (“Little Mermaid,” “Little Shop of Horrors,” and “Newsies”) and Glenn Slater. Of course, the songs help with the characterizations and move the plot along.

The choreography by Jen Cupani was clever and fun. The costumes were perfect by Sara Morrison; I especially liked the sparkled nun costumes at the end of the show.

Sadly, I also want to address performance etiquette. An audience member next to me asked at intermission if children are allowed into the theaters in Chicago. I said most venues prohibit children under five. It’s very rare to hear a baby in the theater. But there was a toddler who kept making noise during the performance; I kept waiting for parents to remove her, but they never did. Plus, cell phones went off at least three times during the show. Ugh. It is so frustrating and distracting. I admire when the actors are able to continue on without being thrown off.

The cast looked like they were having such a great time, which adds to the atmosphere.

After the show, we had a delectable dinner at Carlos & Carlos Restaurant. Lobster ravioli, fresh bread with butter and olive oil, shrimp scampi, generous pours of wine. We enjoyed our lovely day in the ‘burbs.

Catherine Hellmann loves her family, theater, and a good Chardonnay. 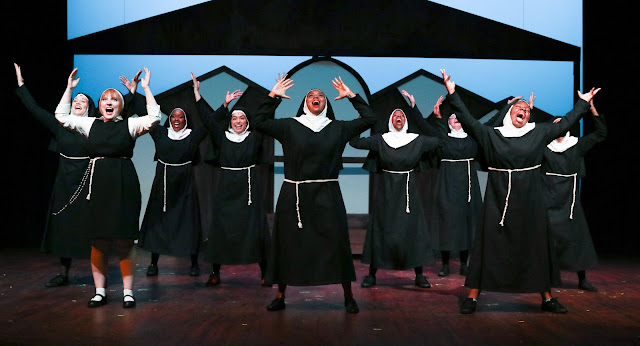 HIT BROADWAY MUSICAL
SISTER ACT
MAKES A JOYFUL NOISE
AT METROPOLIS THIS SUMMER
Musical comedy smash Sister Act brings the hit film of the same name to life onstage at Metropolis Performing Arts Centre through August 27, 2022.
Based on the hit film, Sister Act is the musical smash that has audiences jumping to their feet. Featuring music by Tony and Oscar winner Alan Menken, this uplifting comedy was nominated for five Tony Awards. When wannabe diva Deloris Van Cartier witnesses a crime, she’s put in protective custody where she won’t be found: a convent! Disguised as a nun, Deloris finds herself at odds with her rigid new lifestyle. On a mission to bring new life into the church, Deloris introduces disco moves and powerhouse singing to the choir. The group’s unexpected popularity attracts newfound attention – blowing her cover. Sister Act brings a unique mix of Motown, soul, funk, and disco to the stage. A sparkling tribute to the power of friendship with glorious music and dazzling dance numbers, Sister Act is a reason to rejoice. 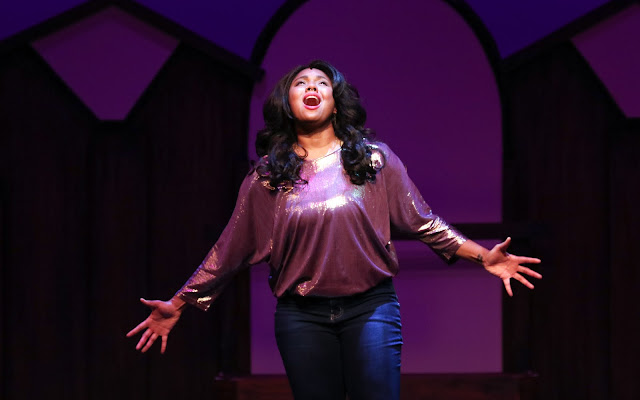 COVID Protocols: Metropolis COVID protocols continue to evolve as federal and state mandates relax and conditions improve. For current information on COVID protocols visit Metropolis’ website. Metropolis thanks you in advance for helping to provide the safest environment possible for the return to live indoor entertainment.
Regular Run Performances of Sister Act are July 21 – August 27, 2022. Tickets are $40 and can be purchased online at MetropolisArts.com, via phone at 847.577.2121, or via email at customerservice@metropolisarts.com. The Metropolis Box Office is currently open Monday-Saturday 12:00-4:00pm. On performances Monday through Saturday, the Box Office will remain open from noon through at least the start of the performance. On Sunday performances, the Box Office will open one hour prior to show time. 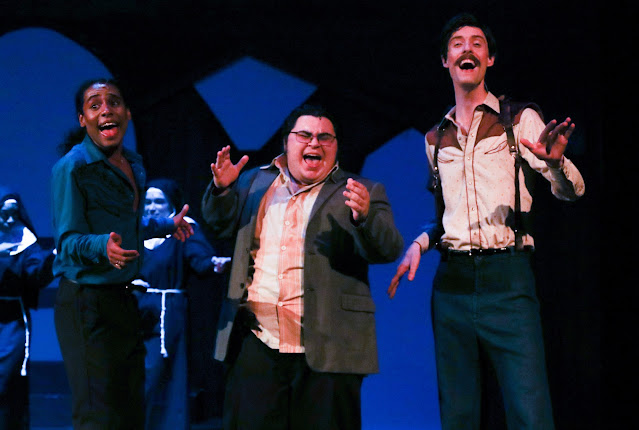 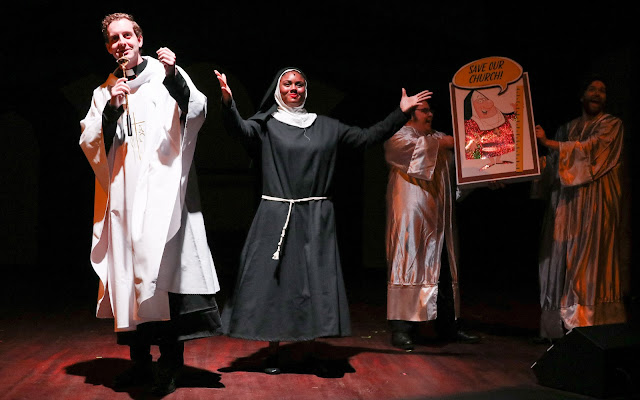 Sister Act is the final show of The Metropolis 2021-2022 subscription series. The 2022-2023 subscription series includes Cabaret (September 15 - October 22, 2022), The Legend of Georgia McBride (January 26 – March 4, 2023), Ragtime (May 4 – June 10, 2023), and Xanadu (July 13 – August 19, 2023).
Metropolis is located in the heart of Chicago’s northwest suburbs in downtown Arlington Heights at the intersection of Campbell and Vail Avenue (111 West Campbell Street). Street parking is available. Due to Arlington Alfresco, there is modified street access and parking on West Campbell Street. Please allow extra time for arrival before your show. Free parking is available in the public garage behind the theatre. For more information about Metropolis and a complete performance schedule, visit MetropolisArts.com or call the Box Office at 847.577.2121.
Metropolis Performing Arts Centre provides professional entertainment and arts education, enriching our community. 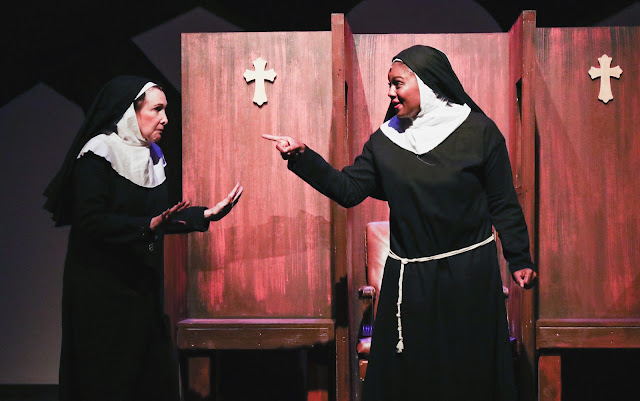 Posted by Bonnie Kenaz-Mara at 1:15 PM