REVIEW: Jeeves Saves the Day at First Folio Theatre at the Mayslake Peabody Estate in Oakbrook Through March 1, 2020 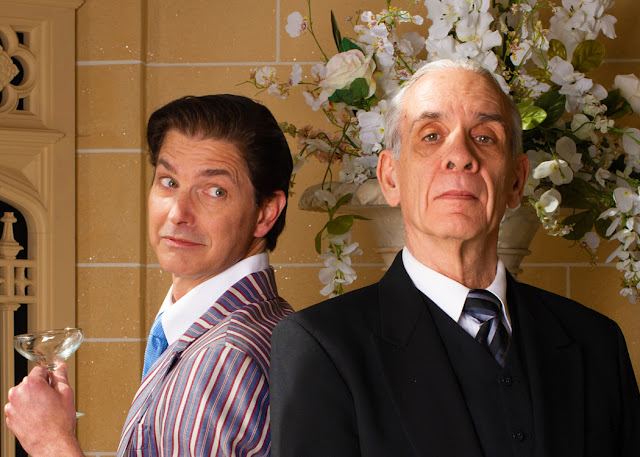 All photos by Tom McGrath

(Setting: A walk in Rogers Park on a chilly, slushy day.)

Me: Want to see a play with me next weekend?
Emily, my oldest, who is often a theater skeptic: Hmmm...what is it?
Me: It’s British humor.
Emily: Okaaayy…
Me: It’s in the ‘burbs. Free parking! (Emily has transitioned to the suburbs and often praises the ample no-cost parking to me.)
Emily: Hmmm…
Me: It’s in a mansion.
Emily: All right.

And so my daughter agreed to join me for Jeeves Saves the Day by First Folio Theatre at the Mayslake Peabody Estate in Oakbrook. It’s a delightful show with great characters, a beautiful set, and fun costumes. 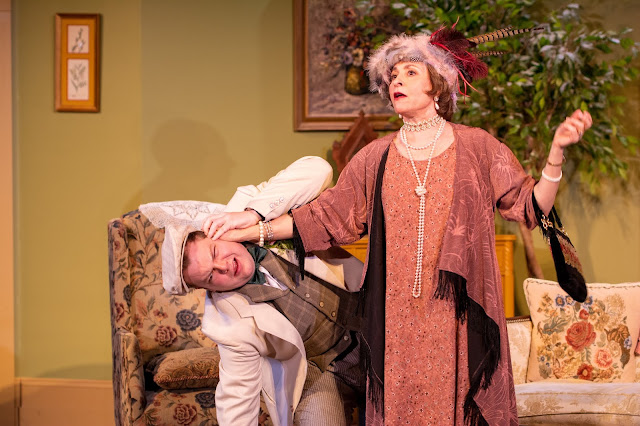 There is a funny script by Margaret Raether based on the characters by P.G. Wodehouse. The play opens with Bertie in the dining room, his head down despondently on the table. He has managed to get engaged to a wealthy woman whom he doesn’t love, and now he worries how he will get himself out of this entanglement.  Christian Gray and Jim McCance have these roles down pat from having portrayed Bertie Wooster and Jeeves, respectively, in five productions now. When Bertie hears that his awful Aunt Agatha will be visiting, he wonders aloud why he dreads seeing her. “Experience,” Jeeves explains drily. 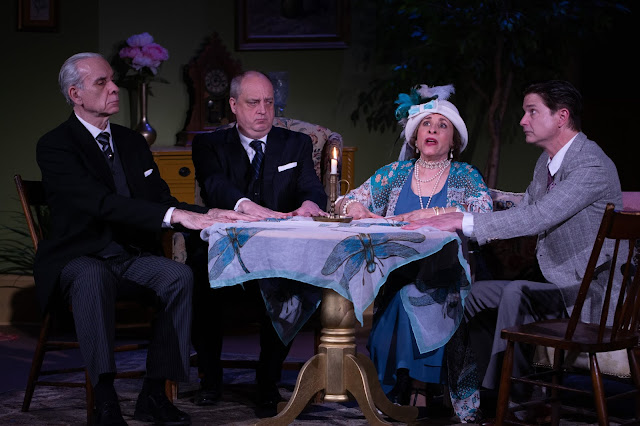 Lucinda Johnston as over-the-top annoying Aunt Agatha is perfectly irritating. She is thrilled about her nephew’s social-climbing engagement. He wants to weasel out of his situation. She tells Bertie that in order for his “spine to hurt, he must possess one.” In a word association game, Bertie refers to his aunt as “my nemesis.” (For “alcohol,”  he promptly answers, ”Always,”) 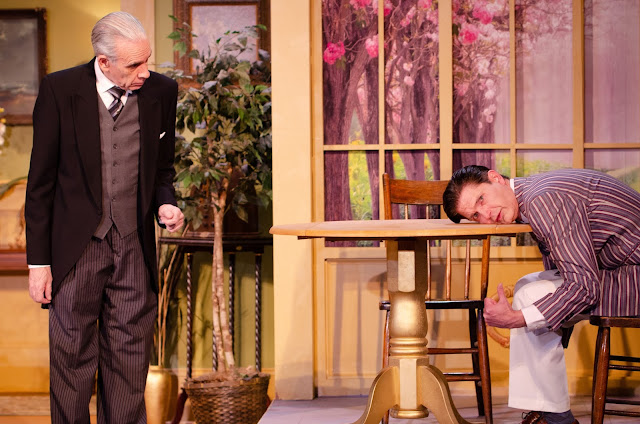 Dan Klarer deserves special recognition as hilarious Cousin Egbert who is on a drawn-out scavenger hunt, continually bringing home odd items. (The best one is a large birdcage with straps that he wears like a backpack.) His physicality and odd movements are very funny and really add to the character’s goofiness.

The wordplay is clever, as when a character thinks they see “an apprehension” instead of an “apparition,” and someone else refers to the “banana peels of life.” The language is a treat, as is the entire play.

And you get to see a show in a mansion...with free parking!

Cath Hellmann is an educator and theater junkie living in Chicago. 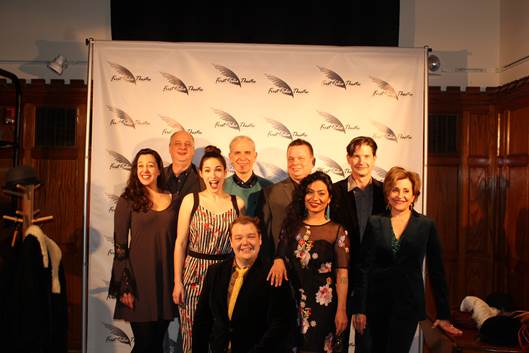 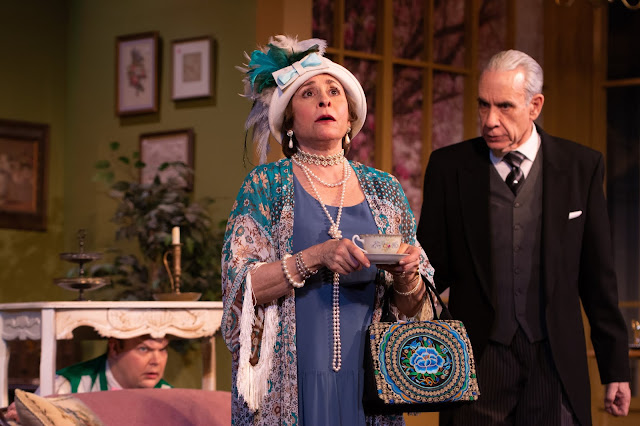 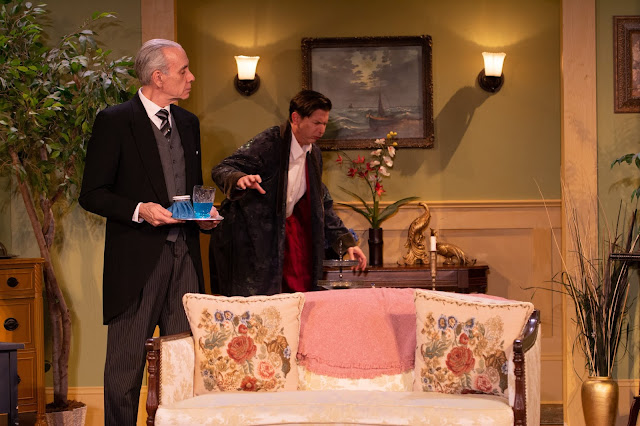 The indefatigable Jeeves and his balmy employer Bertie Wooster are back. Once again, Bertie finds himself suffering the slings and arrows of misfortune at the hands of his relatives, caught between the magisterial machinations of his fierce Aunt Agatha and the plaintive pleadings of his cousin Egbert. Throw in the imperious Sir Roderick Glossop and the sexy chanteuse Red Hot Maisie Dawson, and you’ve got another precarious predicament that cannot be overcome…unless one calls upon the redoubtable Jeeves to save the day. 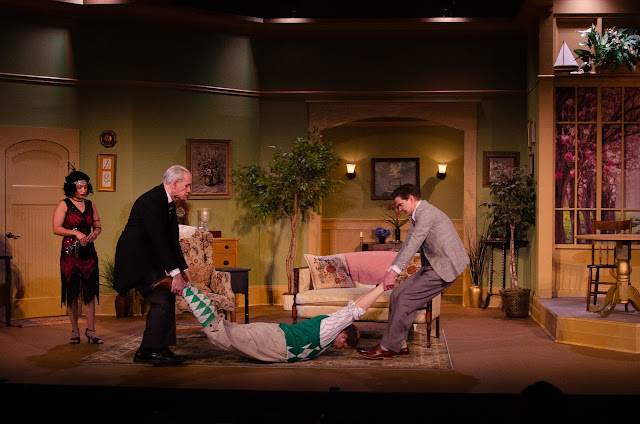 “We are thrilled to present this humor-filled production of JEEVES SAVES THE DAY to First Folio Theatre audiences this winter,” said Director Joe Foust. “We’ve followed Jeeves and his many adventures since First Folio Theatre began telling the Jeeves tales in 2008, and this new tale is filled with more energy and comedy than ever! Our two leads are reprising their roles of Bertie and Jeeves for the fifth time and their characters will experience a predicament unlike any they have faced before. We know audiences will relish the hilarity, hoping that once again Jeeves can save the day.” 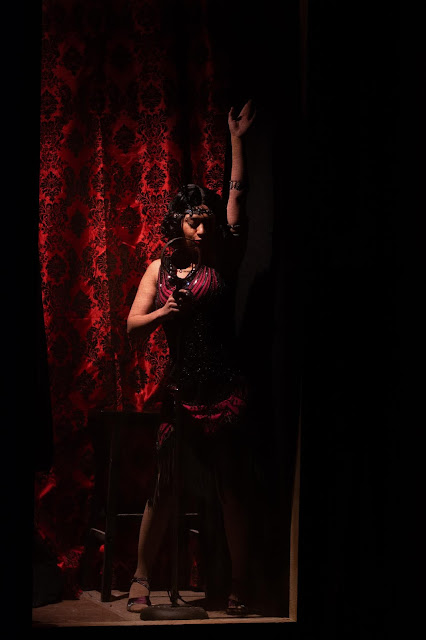 Performances take place at the Mayslake Peabody Estate, located at 1717 31st St., off Rt. 83, in Oak Brook. First Folio is easy to get to via the East-West Tollway (I-88) or the Stevenson Expressway (I-55). Free parking is available on the grounds. Preview tickets are $25. Regular priced tickets are $34 Wednesdays and Thursdays (seniors and students are $29), and $44 on Fridays through Sundays (seniors and students are $39). Tickets are on sale now and may be purchased by calling the box office at 630.986.8067 or online at www.firstfolio.org. 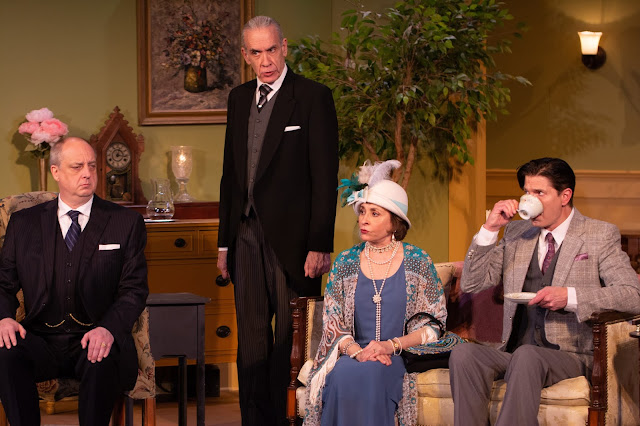