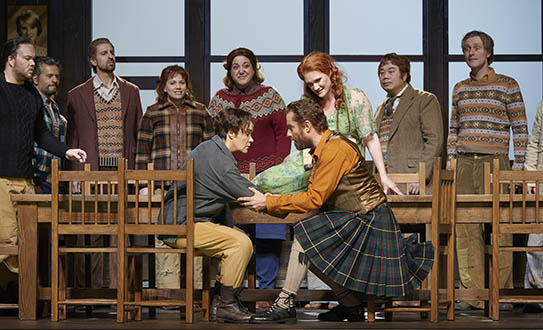 
Provocative Baroque drama about abuse and complicity
in a bold, updated staging 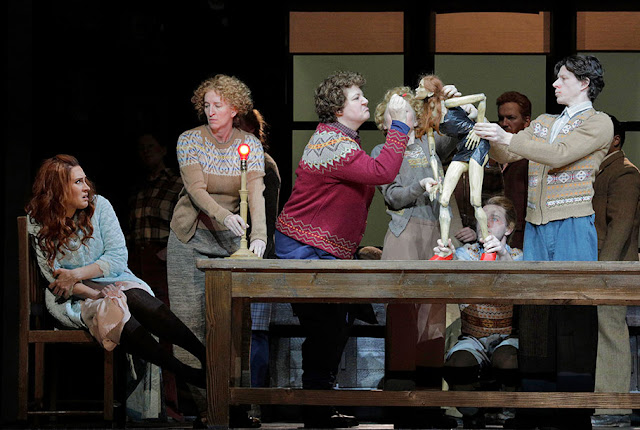 The Lyric Opera of Chicago premiere of George Frideric Handel’s Baroque masterpiece Ariodante opens Saturday, March 2 at 7:30pm in a provocative new coproduction. There are six performances March 2 through March 17 at the Lyric Opera House, 20 N. Wacker Dr., Chicago. Tickets start at $39, and are available now at lyricopera.org/Ariodante or at 312-827-5600.

VILLAINOUS POLINESSO LUSTS AFTER GINEVRA, BUT SHE LOVES NOBLE ARIODANTE, WHO LOVES HER IN RETURN.

That’s certainly the case with the Lyric premiere of Handel’s Ariodante, on multiple levels. Some of its thrilling arias might be familiar from concerts or recordings, but the full Baroque masterpiece is terra incognita for many (even though it was wildly popular when Handel, the German expat living in London, was composing multiple Italian operas). Still, there is inviting familiarity in the bouncing beat and virtuoso vocal writing in this new-to-Lyric opera.

The original plot of Ariodante is full of Shakespearean twists, disguises, mistaken identities, wrenching misunderstandings, and eventual reconciliation (not unlike Much Ado About Nothing). Ginevra and Ariodante love each other and are about to be wed with the blessing of her father, the King of Scotland. Polinesso covets Ginevra and uses her lady-in-waiting, Dalinda (who loves Polinesso), to trick Ariodante into believing Ginevra is unfaithful and provoke his apparent suicide. Ariodante’s brother Lurcanio, meanwhile, loves and is shunned by Dalinda, and blames Ginevra for his sibling’s seeming demise. Eventually Ariodante turns up alive, Polinesso is vanquished, and the “right” couples are united. 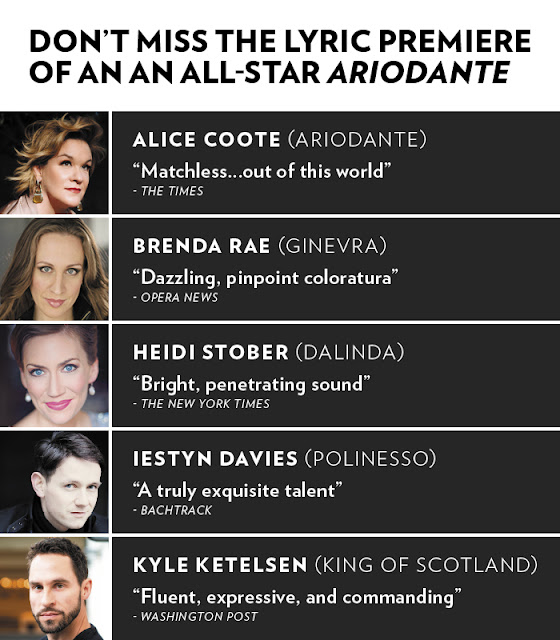 Richard Jones’s production moves the story from medieval times to an isolated, religiously fundamentalist Scottish island in the 1970s. Polinesso is an outsider from the mainland who penetrates this closed community in preacher’s clothes, wreaking terrible havoc on several relationships and the fabric of the village itself through acts of abuse and manipulation. Rather than ending with the reconciliation and redemption traditional in 18th-century opera, this production of Ariodante takes an intriguing detour that will resonate with contemporary audiences.

Puppets representing Ginevra and Ariodante pantomime scenes that reflect the community’s expectations and misperceptions of the central couple in this production, replacing ballet sequences used to close each act in the original opera.

Baroque opera “is radical theater,” says Anthony Freud. “Ariodante deals with abuse and complicity.” Lyric’s general director calls this production of Ariodante “a clear, immediate, powerful telling of the story that will defy preconceptions about Handel’s Baroque formality. Our production reflects many contemporary issues. Handel’s masterpiece may be over 280 years old, but is startling in its topicality and intensity.”

The creative team drew inspiration for this production of Ariodante from the dark indie film Breaking the Waves, and also the plays of Strindberg and Ibsen. There are similarities to Carlisle Floyd’s Susannah, in which an innocent young woman in Appalachia is seduced by an itinerant preacher. There are also traces of Benjamin Britten’s Peter Grimes in the community turning against one of its own. 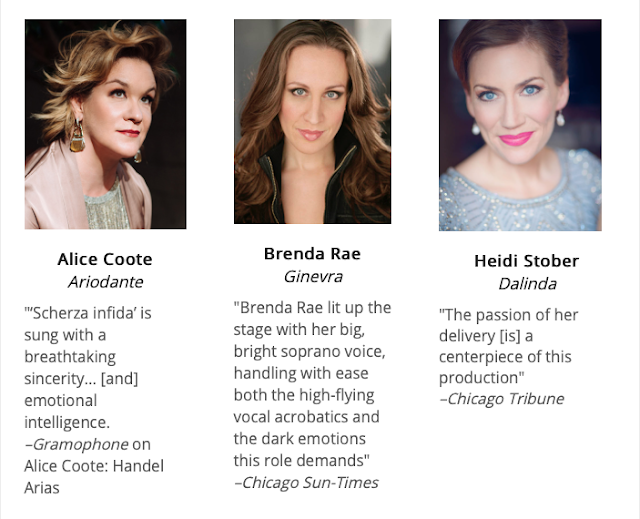 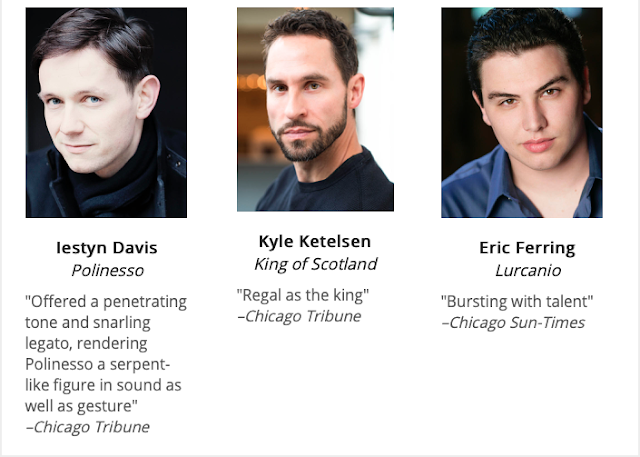 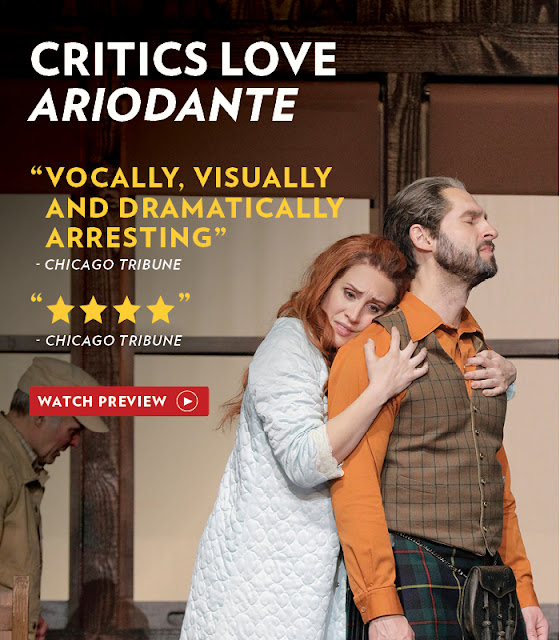 Don't miss your chance to experience this critically-acclaimed premiere — view the trailer here and find out for yourself why critics are praising its "tight, compelling story and rich, well-developed characters" (Chicago Sun-Times).

ARIODANTE IS "QUITE MOVING" (CHICAGO TRIBUNE)
In a small town rife with rumors, who can you trust? The highly anticipated U.S. premiere co-production of Handel's Ariodante opened Saturday night and critics are raving. With only five more performances, Ariodante must close March 17. See what people are saying about this Lyric premiere:

"Vocally, visually and dramatically arresting"
"Clarity and rhythmic verve from the Lyric Opera Orchestra and Chorus"
"An opera penned nearly three centuries ago can resonate profoundly with modern times, when staged as tellingly as this"
"★ ★ ★ ★" (out of four)
–Chicago Tribune


What happens when someone your town trusts is actually the villain? For Ginevra and her beloved Ariodante, things may never be the same. Lyric is proud to produce the company premiere of this important Baroque masterpiece from the composer of Messiah which marries stunning vocalism and riveting drama.

Making its U.S. debut, this critically-acclaimed Lyric coproduction from Director Richard Jones updates the story to 1970s Scotland, where a close-knit, fundamentalist community provides the thought-provoking backdrop. The Toronto Globe and Mail says, "The decisions Jones has made to update and deepen the resonances of the opera work beautifully both to preserve the integrity of the original and add to it touches and textures that only a modern audience can appreciate…If you needed one example to demonstrate why modern staging and perfectly realized music from the past need each other, this was it."


5 REASONS YOU CAN'T MISS ARIODANTE
Handel’s Baroque masterpiece is currently playing Lyric, and there are so many reasons you can’t miss it. Here are just a few:

1. It’s a Lyric premiere. Believe it or not, this rare gem by the composer of the beloved Messiah has never been performed on Lyric’s stage.

2. The cast is truly world-class. Our dream team of opera superstars have voices ideally suited to bring Ariodante to life.

3. It's the U.S. premiere of a production that earned rave reviews. TheToronto Star called it "deliciously interesting" and the National Post praised its "inspired and meticulous staging."

4. Handel’s music is exhilarating. You will fall in love with a score that exudes both passion and elegance.

5. It's not just great music, it's great theater. This story of true love plagued by obstacles in a small town is just as universal today as it was when the opera first premiered.

Save your seats today for Ariodante, on stage March 2-17, and experience this delightful and innovative production for yourself.

Posted by Bonnie Kenaz-Mara at 1:11 PM