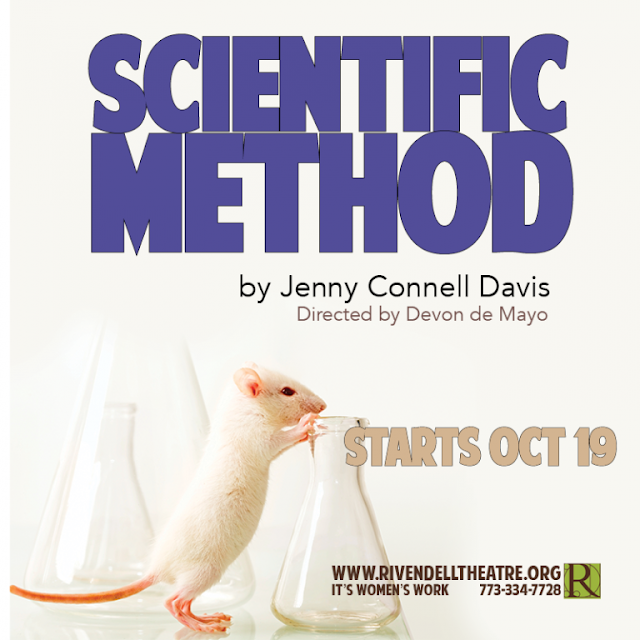 Here at ChiIL Mama and ChiIL Live Shows, we're all about supporting and elevating women in the arts. I'll be out for the press opening of the world premiere of Scientific Method on October 30th, so check back soon for my full review. We've been huge fans of Rivendell Theatre Ensemble (RTE), Chicago’s only Equity theatre dedicated to producing new work with women at the core.

As a female theatre critic with two woman owned websites, I'm completely on board with Rivendell Theatre Ensemble's mission statement. RTE advances the lives of women through theatre. Rivendell cultivates the talents of women artists—writers, actors, directors, designers and technicians—
by seeking out innovative plays that explore unique female experiences and producing them in an intimate, salon environment. Rivendell fills an important role in the Chicago region as the only Equity theatre dedicated to producing artistically challenging and original plays created by and about women.

Amy, a hotshot scientist at an elite U.S. cancer research lab, is moments from publishing data that could revolutionize the field. When she’s scooped by a senior scientist from a competing lab, she first questions her own ability to compete in her chosen field. But as new information comes to light, Amy must face the possibility of willful sabotage by a powerful male colleague. Scientific Method is a witty and complex behind-the-scenes look at women in the sciences—and the struggle many women have to keep moving forward on the rocky terrain of an uneven playing field.

Rivendell’s Town Hall Series:
Saturdays, November 17 and December 1 after the 4pm matinee performances
During the run of each production, Rivendell hosts Town Halls Discussions after select Saturday matinees. These are an essential touchstone for our organization to extend the conversation from the stage to the community. Panelists help field questions, present observations, and participate in supporting a thoughtful, in-depth dialogue for all involved. Audience participants need not be present for the Saturday matinee and are welcome to join the conversation following the performance.

This production is sponsored in part by Dan Cyganowski in memory of Carol K. Cyganowski, scholar and theatre lover.

Jenny Connell Davis’s (Playwright) plays include End of Shift, Goddess of Mercy, The Dragon Play, and Scientific Method.  Her work has been produced or developed at Chance Theater, the Eugene O’Neill National Playwrights Conference, The Playwrights’ Center, Icicle Creek Theater Festival, ACT Seattle, ATC Chicago, the Araca Group, Asolo Rep, New York Stage and Film, Ars Nova, The Gift Theatre, Shrewd Productions, ScriptWorks, NAATCO and Rivendell. Her first screenplay, Playing House, was a finalist for the Nicholl Fellowship; her second, Two Truths and a Lie, was a semi-finalist.  Her short with writer/director Soham Mehta, Fatakra, has screened worldwide and been recognized with more than a dozen audience awards and jury prizes. She currently has film and television projects in development with Maven Pictures/Tangerine Entertainment, Fox Animation, Astronauts Wanted/Cinestar Pictures, and Iconoclast/Anonymous Content. Jenny has an MFA from UT Austin, is a former member of Ars Nova’s Play Group, an Affiliated Writer with the Playwrights’ Center, and was the 2014-2015 Hot Seat Resident Playwright at Baltimore’s Center Stage. She is a member of Chicago’s Gift Theatre Company and a proud member of ScriptWorks and the MARTHAs, an Austin-based playwrights’ collective.

Devon de Mayo (Director) is working with Rivendell for the first time. Recent directing credits include: Women Laughing Alone With Salad (Theatre Wit); The Burn (Steppenwolf Theatre), Harvey (Court Theatre), Sycamore (Raven Theatre), You on the Moors Now (The Hypocrites), Animals Out of Paper (Shattered Globe Theatre), You Can’t Take it With You, and Lost in Yonkers (Northlight Theatre), Jet Black Chevrolet (side project); Compulsion and Everything is Illuminated (Next); Roadkill Confidential, The Further Adventures of Hedda Gabler, and Clouds (Dog & Pony). Directing and devising credits: Don’t Look Back/Must Look Back (Pivot Arts); Guerra: A Clown Play (La Piara, Mexico); The Whole World is Watching, As Told by the Vivian Girls and The Twins Would Like to Say (Dog & Pony). She received her MFA from Middlesex University in London and did further studies at the Russian Academy of Dramatic Arts in Moscow and the Indonesian Institute for the Arts in Bali, Indonesia.

Ashley Neal (Amy) is back at Rivendell Theatre Ensemble, where she is a longtime member and most recently appeared in Cal in Camo. She has appeared in many Rivendell productions including: Alias Grace, Wrens, 26 Miles, The Walls, Be Aggressive, and others. Ashley most recently appeared in A Red Orchid Theatre's The Nether where she also appeared in A Red Handed Otter. Other shows include: London Wall, Men Should Weep and Stage Door with Griffin Theatre, The Life and Sort of Death of Eric Argyle with Steep Theatre, as well as work with Chicago Dramatists, Pine Box, Irish Theatre Company, Step Up, Jackalope Theatre, Victory Gardens, Strawdog, The Greenhouse Theatre, and others. Ashley is a graduate of Columbia College Chicago and The School at Steppenwolf. She is represented by Big Mouth Talent.

Glenn Obrero (Manish) is making his Rivendell debut. Other Chicago credits include: 20,000 Leagues Under the Sea (Lookingglass Theatre); A Beauty Queen of Leenane (Northlight Theatre, u/s); A Wrinkle in Time (Lifeline Theatre); Akeelah and the Bee (Adventure Stage Chicago); How We Got On (Haven Theatre, u/s). TV credits include Chicago Fire (NBC). He received his BFA in Performing Arts from Savannah College of Art and Design and trained on-camera at Vagabond School of the Arts. He is represented by Gray Talent Group.

Josh Odor (Julian) is back at Rivendell where he was last seen in The Firebirds Take the Field. Most recently Josh performed in TimeLine's To Catch a Fish, ATC's Welcome to Jesus and The Hypocrites' You On the Moors Now - also directed by Devon DeMayo. Josh has also worked at Steppenwolf, The Goodman, Steep, Teatro Vista, The Artistic Home, The Inconvenience, Griffin, The House, Haven, Erasing the Distance, The New Colony, Collaboraction, Side Project, LiveWire, Buffalo Ensemble, at The Long Wharf in New Haven, CT, and as a member of Pine Box. Josh's television work includes Chicago PD, Chicago Fire, Betrayal and Boss.

Courtney Williams (Makayla) is making her Chicago stage debut with Rivendell. Originally a Brooklyn based performer from Oakland, CA, her work has primarily been in New York's colorful downtown scene. She's performed and collaborated with Daniel Alexander Jones, Kaneza Schaal, Mike Iveson, Tea Alagic, Gracie Gardner and other artists who have enriched her collaborative process.

Carmen Roman (Marie) most recently performed in Angels in America at Berkeley Repertory Theatre. Last fall she played Margaret Thatcher in The Audience at Timeline Theatre and in Native Son at Yale Rep. She also played in the world premiere production of Native Son - a co-production of American Blues Theater and The Court Theatre. She played Mrs. Eynsford-Hill in My Fair Lady at The Lyric Opera last season. Other recent production include: Sotto Vocce by Nilo Cruz at Portland Stage (Maine), Alabama Story by Kenneth Jones at Peninsula Players (Wisconsin) and playing opposite Hal Linden in Moon Over Buffalo at The New Theater (Kansas City). Carmen was in the National Tour of Angels in America and appeared Off-Broadway in The Iphigenia Cycle (Theater for a New Audience); The Mysteries (Classic Stage Company); Paradise (Gary Allen productions), and Love, Sex and Death in the Amazon (Paradise Factory Theater). Regional credits include 13 seasons with Peninsula Players; Wit, Black Snow, Brutality od Fact (Goodman Theatre, Chicago) Side Man (Steppenwolf Theatre, Chicago), The Price (Syracuse Stage and Geva), The Importance of Being Earnest  (Centerstage Baltimore), Lost in Yonkers (Coconut Grove, Walnut Street Theater) Sonia Flew (The Huntington Theatre), According to Goldman (Philadelphia Theater Company) Electra (Hartford Stage Company), Big Love (The Wilma), Shadowlands (The Alliance Theater). Film/Television credits include Chicago PD; Betrayal; Boss; All My Children; Early Edition; Law and Order; Law and Order SVU; Criminal Intent; Savages, The Falcon (a co-production shot in Soviet Georgia) She is a proud company member at American Blues Theater and Circling the Drain, New York. Awards and honors include 2002 Fox Fellow, Sarah Siddons Award, Florence Herscher Award, and Joseph Jefferson Awards for Master Class and Wit.

Schedule:
Thursdays, Fridays and Saturdays at 8:00pm
Saturdays at 4:00pm
Sundays at 3:00pm (November 18 and December 2 ONLY)

Pay What You Can: Five seats (10% of the house) are available for each performance. Reservations are made on a first come, first served basis.
Three-show pass: $59-$80 for one ticket each to the next three Rivendell plays